The Case Against Rafa Benitez

Share All sharing options for: The Case Against Rafa Benitez

Ever since Ferrara was sacked, rumors have been spreading around that Benitez would be our next tactician. He is seemingly on the outs at Liverpool, and the LFC management would be happy to see him go, as they wouldn't have to pay him an enormous amount of money they don't have to sack him. With Zaccheroni obviously not staying around and Liverpool continuing to suck, the rumors have intensified. Today, there are all sorts of suggestions that Juventus have given the Fat Spaniard a one-week deadline to accept or reject the job. That's a classic tabloid line...but I do think that our management is eyeing up Rafa seriously. Here is why we should do all we can to avoid him. 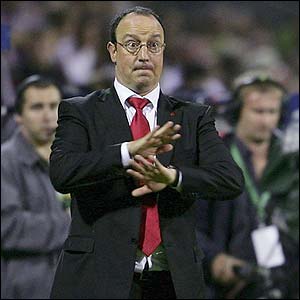 "Hey ref, help me out here! I need a reason to bitch and moan."

Rafa Benitez's basic strength is his tactics. There is no doubt that he is a master tactician, his excellent European record attests as such. In the league though, where you have "less important" games against opponents you cannot study as thoroughly, his record is well, mixed at best. Liverpool domestically have been nothing short of a failure under his tenure. Valencia he obviously did very well with, winning two league titles and a UEFA Cup. It's hard to simplify without oversimplifying, but I believe one of the key differences is the team he started with. At Valencia, he was dealing with a weakened Spanish league and a strong Valencia side when he inherited. The Valencia team was the same core that had reached the 2000 Champion's League final against Real Madrid, with young stars like Roberto Ayala, Ruben Raraja, David Albelda, Vincente Rodriguez, Pablo Aimar, Angloma, and veteran goalkeeper Santiago Canizares. The team was burgeoning with talented players, other ones include Gerard and Claudio Lopez. He was able to capture the league title, while not easy, was significantly easier than now. Real Madrid's galacticos failures was starting to settle in around 2002, and 1999-2004 were lost years for Barcelona. The first year he won his Liga title, SuperDepor finished 2nd. At Liverpool, he arrived at a team that had been struggling in 4th-5th place the last two seasons and was clearly inferior to Manchester United and Chelsea.

Rafa Benitez is a good coach for taking an established team and taking them farther. He is not good at building a team together, in other words, you can consider him the anti-Ranieri. While Ranieri managed to cobble together a cohesive unit at Juventus, it has since fallen apart and crucially, the glue holding it together, the Old Guard, is aging and we need to start looking at replacements for Trez, Del Piero, and Camoranesi. Along with Buffon and Nedved, they were the crucial performers under Ranieri's era. And that is why Benitez would be a horrible choice for Juventus- we are a team rebuilding and restructuring, we are not a team ripe for a title or cup challenge. And there are three aspects in which Benitez is a disaster, that are absolutely key for Juventus to return to challenging team. They are listed below.

i. Getting the best out of established players.
ii. Conducting smart transfers and integrating them into the team.
iii. Developing young players, both from our academy and from transfers, into starting XI material. 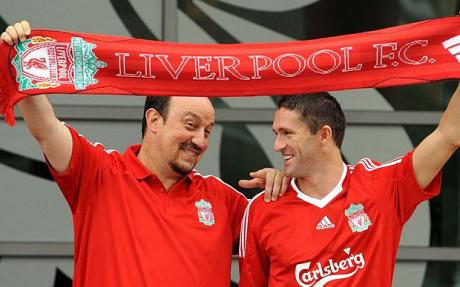 i. Getting the best out of established players-

This one is a bit more positive than some of his other fields, as Hyppia, Carragher, Gerrard, Finnan, and Riise having relatively good form during his management. However, there are plenty of other players at Liverpool that were discarded that had already been established in the team. Chalk it up to them not deserving to be there in the first place, or falling into poor form, or not fitting into his system, however you'd like. He will certainly encounter that if he was at Juventus, and it doesn't seem like he would react too well.

Secco and Benitez: A Match made in Hell

ii. Conducting smart transfers and integrating them into the team-

Obviously his role in the first portion would be far more limited than in England, in Italy, the Director of Sport (Secco) makes most of the transfer decisions. That said, managers have a fair amount of voice in the matter- Mellberg and Poulsen (instead of Xabi Alonso, damnit) were both requested by Ranieri personally. Not sure if Secco would have gone after Mellberg, but I think Poulsen was more of a joint operation after Ranieri declined Xabi. Either way, Benitez's transfers have been absolutely horrendous at Liverpool, and it's funny, despite how much he bitches about money, he's spent a ton. Here's a comprehensive list of his signings.

FAILURES:
Josemi (£2 million)- Returned to Spain after one season in a swap deal.
Fernando Morientes (£6.3 million)- Sold for £3million after a year and a half.
Antonio Nunez (£2 million, part of Michael Owen deal)- Returned to Spain to a newly promoted side after one year.
Mauricio Pellegrino (Free transfer)- One of Rafa's men from Valencia, signed for 6 months and was not kept on.
Scott Carson (£750,000)- Loaned out, currently playing in the Championship.

FAILURES:
Álvaro Arbeloa (£2.5 million)- Played ok in his time there, but moved on this summer for the same fee.
Gabriel Paletta (£2 million)- Young defender signed, left 1 year later after 3 league appearances.
Dirk Kuyt (£10 million)- He is an average player and £10 million is a lot for an average player. But as a utility player, he's not bad. It's just those types (mediocre, utility) shouldn't be spent that much money on. (Aka Poulsen, Tiago, etc...)
Craig Bellamy (£6.5 million)- You can blame his failure at Liverpool on his temperament. You can also blame his transfer on Rafa not seeing well in advance he is a nutjob. Actually left for a profit.
Jermaine Pennant (£7.5 million)- Left on free transfer to Real Zaragoza, after a crap loan at Portsmouth.
Mark González (?)- Left for Real Betis two seasons later.

FAILURES:
Philipp Degen (Free transfer)
Andrea Dossena (£7 million)- Everyone in Italy raised their eyebrows when Liverpool signed Dossena for this much.
Robbie Keane (£19.3 million)- Sold for £12 million 6 months later.
Albert Riera (£8 million)- Never really lit it up, and is on the outs.
David N'Gog (£1.5 million)

FAILURES:
Alberto Aquilani (£17.1M)- Everyone in Italy laughed when he signed the prissy injury-plagued midfielder. I pushed back in summer 2008 for us to sign Aquilani, but after the year he had, hell no. And that fee is laughable. He would have had problems at Juve given his injuries and attitude, to adjust to another league as well and to be asked to fill Xabi Alonso's boots, well, he was screwed from the start.
Glen Johnson (£17.5M)- That is an enormous amount of money for a defender. For that price, you better be getting a vintage Zambrotta. He has a massive way to go to being valued at that.
Sotirios Kyrgiakos (Free transfer) Had a great first half of the season, but according to my Newcastle (and EPL fan) he has been "woefully out of it" since the winter break.
Maxi Rodriguez (Free transfer)- For free, it's not a bad deal. But having lived in Madrid last year, I can tell you there's a reason Atletico let him go for free. Not that great of an attitude, and a very inconsistent player. 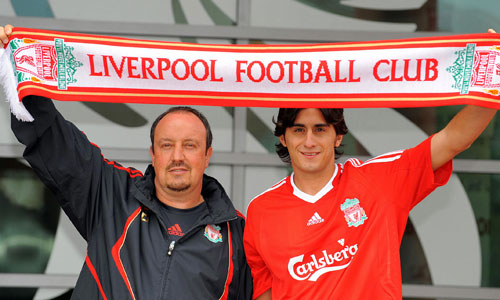 What do I read from this? Two things- Number one, he's not that good at identifying talent or more importantly, understanding who will or won't work at Liverpool or in the Premier League. Second, by virtue of the large numbers of outgoing players, he has failed massively to help his transfers settle. Few players seem to have lasted over 2-3 years, and that's understandable if they are asked to be a reserve or a bit-player. But he's spent plenty of players like Bellamy, Riera, Keane, Pennant, Kuyt, etc, and they are not world class players. Rafa seems to have judged them poorly from the offset, but also, failed poorly to integrate them. It seems he cannot distinguish between good-players-he-is-signing-to-be-starters, and average-players-I-hope-play-well. Why does this matter when we have Secco? Well, he can still give his input. And can he help our transfers settle? In both cases, it seems like it'd be a further disaster than our last few transfer markets have been. 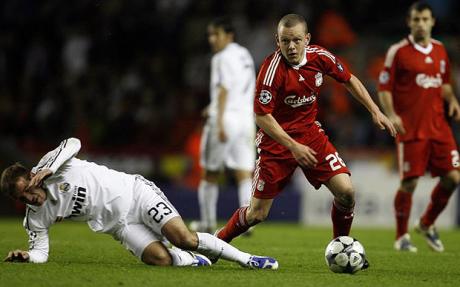 iii. Developing young players, both from our academy and otherwise, into starting XI material.

It seems I subconsciously chose these points in order of how miserable Rafa is at it. He's a mediocre man manager, a poor transfer director, and an even worse developer of youth talent. Slam Fergie or Wenger if you want, but they both do a pretty decent job at it. I cannot think of bona fide young starlet that he has developed into a world-class player. Perhaps Mascherano, maybe Insua, but I would say like Fernando Torres, he was already a star when he joined Liverpool. There are dozens of transfers of young players in the above list that I omitted, because they never played or were bought and sold for peanuts. There have been some young players who have gone nowhere, and there have been a fair amount that have played decent enough...but never made the transition to world class under his management, ie- Sissoko, Babel, Agger, Lucas....the list goes on. Not one player has come up from the academy.

This is no good for Juventus. We need a manager who can get the best out of our existing players, integrate transfers well, and develop youth. Our transfers have been a mixed bag, though the talent is there. We have existing players like Poulsen who have shown promise, but need to be given some personal instruction. And lastly, we have an amazing group of young players- There's Giovinco, Marchisio, and De Ceglie from the 2008 transfer window, of which Marchisio has transitioned to world-class but the other two are struggling. We have Candreva (temporarily), Ariaudo, Criscito, Palladino, all of which we have interest in. Then there's the academy, that has Rossi, Esposito, Marrone, Giovinco, Immobile, Pinsoglio, De Paola, Bamba, Giandonato, Yago, Belcastro, Alcibiade, all who are brimming with potential following their 2nd Viareggio win in a row. In particular, Yago, Rossi, Immobile, Marrone, Pinsoglio, and Alcibiade are some of the most promising players from our Primavera in the last decade. Pinsoglio and Immobile may be the best from their position. We badly need a coach that can integrate them into the lineup. 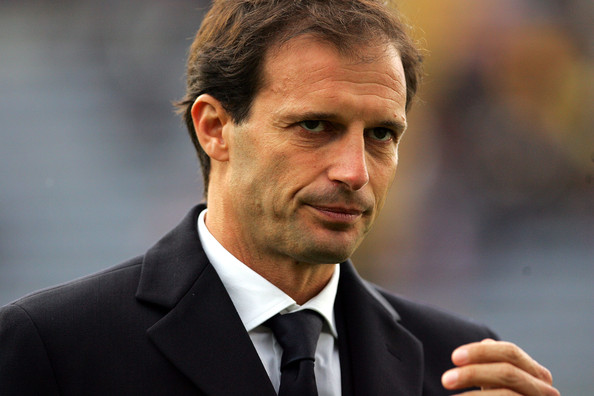 The Dark Horse Candidate: Prandelli is my first choice, but I see a lot of 1992-1994 Lippi in him

So who is good with players, transfers, and youth? Well, if we're looking at the EPL then Wenger of course, but it'd be impossible to pry him from Arsenal. But we've got our own in Italy- Ex-Juventino Prandelli has the most proven track record in all 3 departments, and he has plenty of Serie A and CL experience, though getting him to switch from Fiorentina would be difficult. Ex-Primavera coach Gian Piero Gasperini, over at Genoa has integrated many of his transfers excellently, like Thiago Motta and Diego Milito of best example. He's gotten some of his older players to bring out their best, like Mesto, or Marco Rossi who, dirty player he is, is playing in very good form the last two years. And his record with young players (and specifically, young Italians) is excellent- Bocchetti, Criscito, Palladino, Sculli, Amelia, etc. He'd be poachable. Allegri is certainly attainable now that he's been fired, and he has done well with Cossu, Matri, Jeda, Biondini, Ariaudo, Marchetti, etc. (Btw- Whoever stated in the comments the other day he got sacked for entertaining offers from Fiorentina and Juve, claim your prize. Looks like you were exactly right.) For me, either of these three coaches should be considered far ahead of Benitez.

In addition to all of this, his tactics and rotation are a bit...iffy at times. You think Ranieri played for draws, how about this?