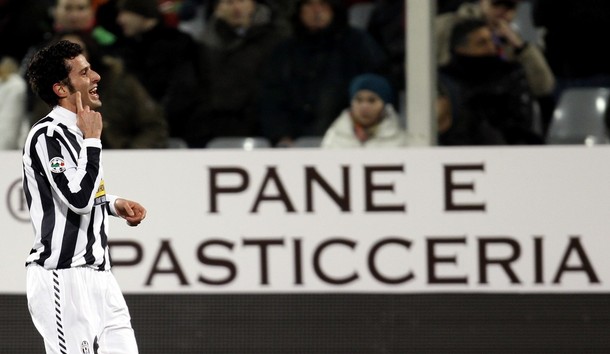 Not the prettiest victory, but a victory all the same in a very hostile atmosphere too boot. Prandelli didn't hold anything back with Vargas, Jovetic, and Gilardino in attack, and at the same time it seemed number 11 received a few favourable spot fouls as well. However, our lads ran hard, and managed to squeeze out three very important points away from home. Obviously there are still some huge questions that need to be addressed as our lack of possession at times is unfitting for even a Serie C side. Hopefully the Zac can find a stopgap solution tactically going forward.

Enjoy the celebration while it lasts Juventini, as it appears both Chiellini and De Ceglie have picked up knocks. I haven't heard anything official just yet but it was clear to everyone watching the game that after Manninger's flying knee to De Ceglie in the first half, in the dying minutes of our victory in Florence, Giorgio was hobbling in pain. Then, as he exited the pitch, three team doctors surrounded him. Ironically in the same game Iaquinta makes his comeback appearance, we could lose another of our talismanic bianconeri. Check the comments section below for the latest updates. Next up, Fulham midweek Thursday.

p.s. shout-out to Manninger for the huge save in the first half.