Being March and Juventus having a piss-poor season and all, the mercato rumors for next year have been in overdrive, for every position. A brief rundown- 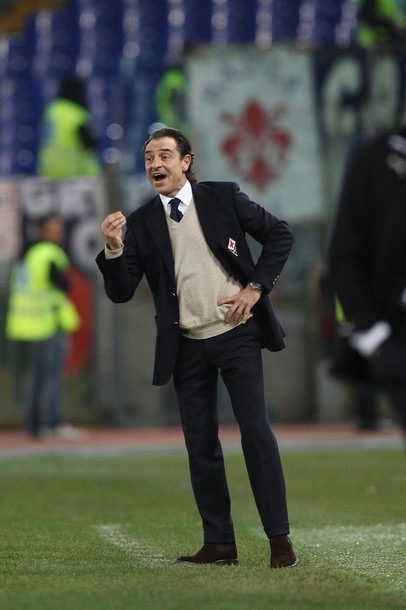 The man is always impeccably dressed.

ALLENATORE: There is a possibility of Zaccheroni staying, and if he does well, he very might well get a longer contract. I don't think he's the way forward, but he's a good coach to get us on our feet again. The front-runner, of course, is Cesare Prandelli of Fiorentina, who we are playing this weekend. He's also been hotly tipped to succeed Lippi with the Nazionale. There's no doubt that Prandelli is a fantastic coach, though one observation how Calcio is funny- Had Fiorentina lost one or two games in the CL and missed the knockout stages, their season would be an unmitigated disaster for Fiorentina. His pros of course is he's a good tactician, and even better at bringing out the best in players. A bit of a hit-or-miss record with developing youth. Big question, of course, is does he want the Nazionale job? If not, would he be willing to cross the Fiorentina-Juventus divide and potentially become hated among his former fans?

Alternatives include Benitez, Conte, Capello, Lippi, Gasparini, and in some circles, Allegri of Cagliari. To me, there are only two I'd like; Lippi and Allegri. Benitez I do not like at all- he's an excellent tactician, but a piss-poor man-manager, even worse at picking transfers, and has an awful record of developing youth. Plus, he is very whiny and would come on a huge salary, no thanks. Conte is better than Ferrara, his success with Bari last year proved his coaching talent. Atalanta was in a dreadful situation when he arrived, he marginally improved the team, I'd like to see him get more Serie A coaching under his belt first. Capello and Lippi, obviously I would prefer Lippi far over Capello, but I'd rather move to the future...I think these guys are in the past. Gasparini's work was hailed over the last two seasons, and he has hit a bit of trouble, but I think that's more due to Genoa selling their best players and having significant turnover. 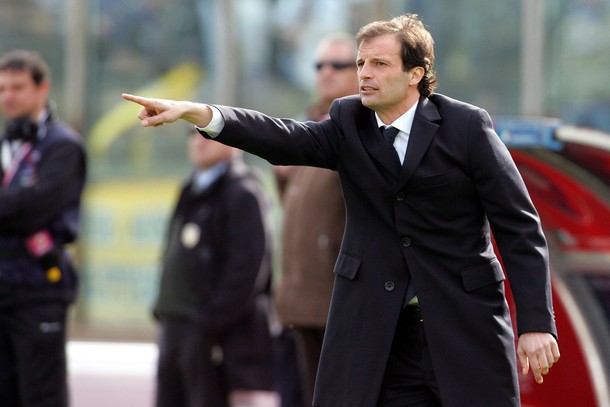 Which brings me to the last mention, Massimiliano Allegri, Mr. Cheerful. I really like this guy, and I've been very impressed particularly over the last few months. Having coached Sassuolo to a historic Serie B promotion in 07-08, he was hired as Cagliari's coach to replace Ballardini, who everyone agreed had performed miracles to save Cagliari that season. To replace him with a coach who had never coached Serie A or B, was pretty nuts and I thought Cagliari had guaranteed themselves relegation. Critics of Allegri were seemingly justified, as he opened his Serie A career with 5 straight losses to open Serie A 2008-2009. Everyone thought Allegri was too green, and that Cagliari's owner, the notoriously impatience Cellino would sack him soon. Credit to Cellino, he held off, and Cagliari went on to be one of the surprises of the season. This season, they also opened in relatively poor form and I wondered if Allegri was like fellow ex-Cagliari manager Marco Giampaolo, who managed Siena to an impressive finish and was sacked the next year. Cellino stuck again with Allegri, and they are in a solid 8th place, only 5 points behind 4th. Numerous players have exploded under his management, ie- Cossu and Matri, who are having excellent seasons. He plays attacking football, he's tactically savvy, a good man manager, and he's ambitious. What's not to like? 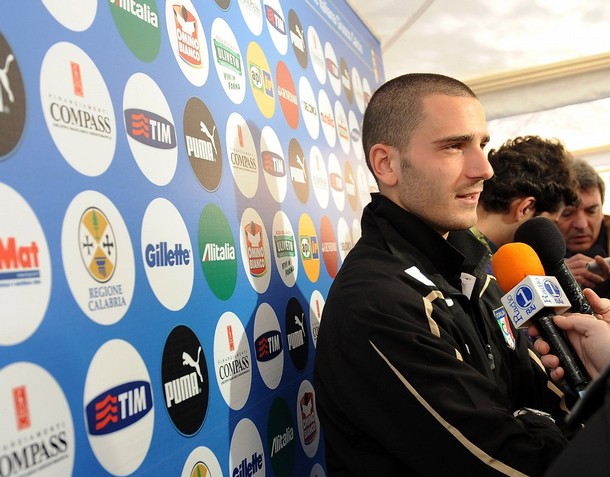 He looks a lot like Candreva in this picture. 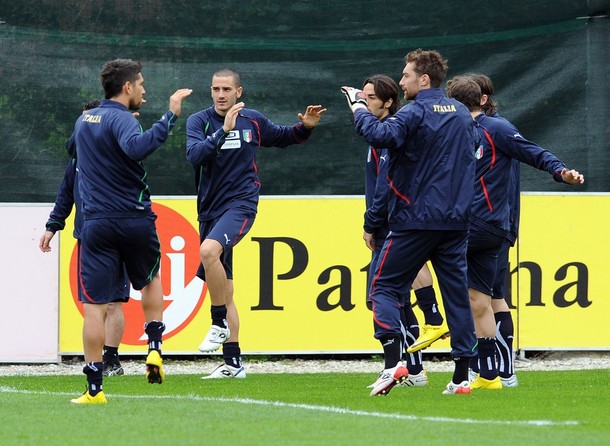 Today, Genoa owner Enrico Preziosi confirmed that Juventus had asked for a valuation of both Ranocchia and Bonucci. This led to a few headlines that we were interested in both, but it's a pipe dream- we're simply asking both in case one is unavailable, we can pursue the other. I personally think Ranocchia has more potential than Bonucci, he's shown more maturity, he's a bit of a better player now, and he's capable of playing well alone, whereas Bonucci seems to be the type of player that needs a strong player by his side. The other advantage of Ranocchia is Genoa owns him in full, whereas Bonucci is co-owned by Bari and Genoa so negotiations would be a bit more complicated. The downside, of course, is that Ranocchia is likely out for the season, whereas Bonucci may be going to South Africa.

I'd be pleased with either of them, though, and I think we can strike a deal. We have decent relationships with Genoa, as of two years ago 1/2 of their squad was former Juventini, and we still have co-ownership in Criscito and Palladino that could be used as makeweight. I'd be willing to give up both, even though I like them- Criscito is a great player, but I think De Ceglie is just as promising, and ditto for Palladino and Giovinco. Zaccheroni seems to have put a decent amount of faith in De Ceglie, benching Grosso for him, which absolutely delights me. Negotiations won't be easy, though; Inter's interest in both of them is also well known, Inter made a superswap for Motta and Milito last year and have Suazo on loan, and before us Juventini and Interistas forget, Genoa has an interest too. Their defense has been terrible this season, and so they very well might want to keep one, if not both of the players.

Back to Cagliari, we have Ariaudo on loan who is playing fairly well, a few weeks ago he was named in Goal.com's XI of the week, which surprised me because I didn't even know he was getting regular playing time. Back a year ago, Ferrara (when Ranieri was still coach and Ferrara headed up the youth sector) gave a nice interview to the Gazzetta, describing Giovinco, De Ceglie, and Marchisio's progress with the first team. Added at the end, although younger and still largely in the Primavera, was Lorenzo Ariaudo, described as having the technical talent but also the humility to know his place in the team. Will he be recalled for next season? Hard to say. Cagliari have the right to sign him in full, though Ariaudo of course has the right to turn down Cagliari's offer. We might see him sold on co-ownership to Cagliari for next season. 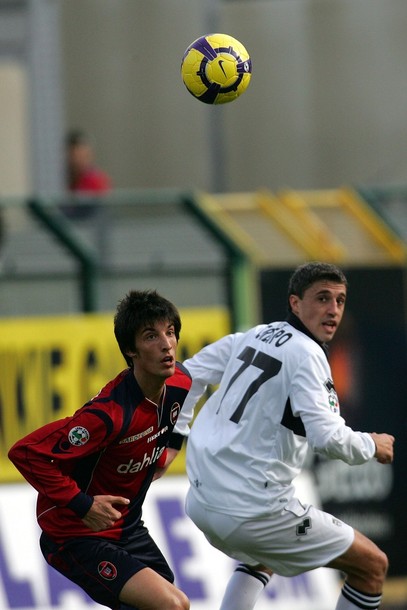 Clichy of Arsenal has also been linked to us, which is a nice story, but very unlikely. The club has an option to sign Cannavaro for next season, but I don't see it happening. We will have to settle Molinaro's situation, of course, though it seems pretty clear he won't be returning. His agent said it'll be decided after Easter, but basically confirmed Stuttgart wanted to take up the option for full ownership.

D'Agostino wants to go anywhere that's not Udinese, and his agent says there are 3 clubs interested in him, none of which start with J. Likely Napoli, Lazio, and Palermo. The big rumors recently have involved Franck Ribery, of Bayern Munich. Depending on which paper you read, either San Gigi or Diego is going to go to Munich as part of a down-payment. Laughable. There are a lot of reasons why I don't want Ribery at Juve- He'd cost far too much, he's injury-prone, he's a locker room cancer, etc, etc, etc. No thanks. Other laughable rumors include Felipe Melo going to Arsenal in exchange for Cesc Fabregas. Don't I wish! 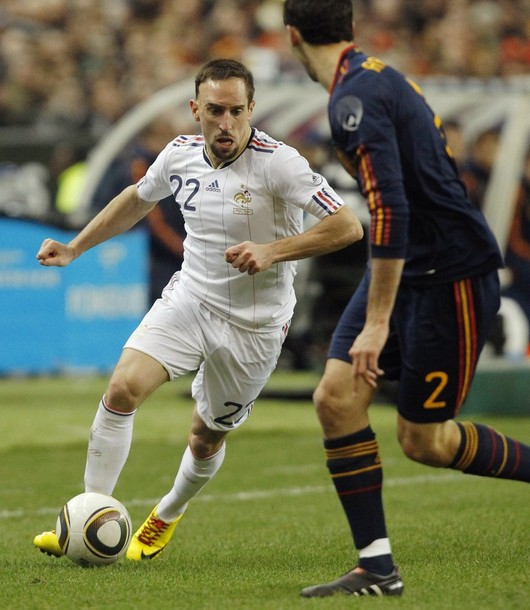 Limped off injured against Spain.

Only one strong rumor over the last few weeks, and that's of Kevin Kuranyi, who I have already addressed, and responded with a resounding "Blah." Oh, and supposedly Van Persie for Melo. Ha. 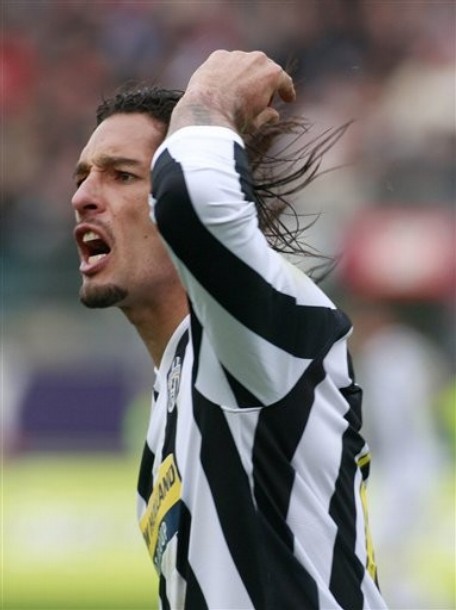 He likes to complain. 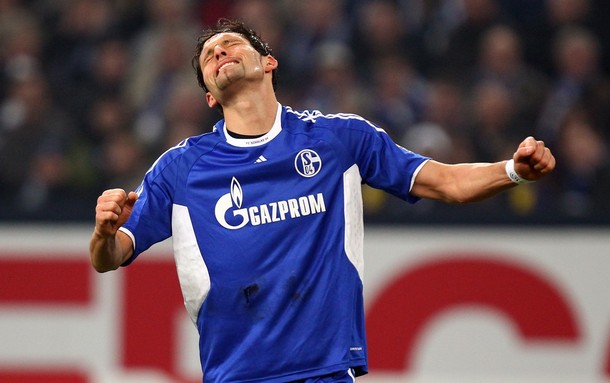 Evidently, so does his twin.