Share All sharing options for: BOOM- Inter and Milan caught red-handed in Calciopoli

This won't come as a surprise to any Juventino who has done research into Calciopoli, at all. There's too many conflicts of interest between the FIGC, Inter, and TIM for Calciopoli to be legitimate. Full story after the jump. 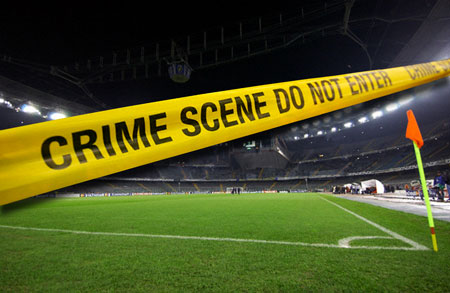 There has always been swirling reports of Inter's involvement in Calciopoli, be it that they were guilty themselves, or that they had been actively working to create the whole thing. Most Juve directors accepted their punishment without appeal, simply because they wanted to get the whole thing over with and move on. Lucky for us, Luciano Moggi, in true "Old Triade" style refused to accept his punishment, and has been fighting his ban and conviction through the courts the last few years. A few weeks ago, you may remember his lawyers found evidence of tape recordings involving Juventus that had gone missing; key prosecution witness Attilio Auricchio, a good friend of anti-Juventino Franco Baldini, responded that "he couldn't remember." Auricchio, if you didn't know, is an ex-policeman in charge of handling the wiretaps, who has an outstanding charge for tampering with a mayoral election evidence in Rome. Many of the wiretaps Auricchio "lost" had been used to convict Juventus.

Auricchio has stated the same thing today, in response to a massive change in the case. Moggi's defense team has found evidence of many phone calls between Inter's management and the referee designator. For those who don't know, essentially Calciopoli was charges of a lot of wrongdoing, but at the end, the only thing Juventus were convicted and relegated for was, basically, too much contact with the referee designator, Bergamo. Moggi was accused of having too personal of a relationship with Paolo Bergamo, and exclusively so. There were no convictions of Moggi manipulating the transfer market, there were no convictions that Juventus had actually fixed or altered the result of any game. (Lazio and Fiorentina were busted for match fixing)

Today, Moggi's lawyers uncovered some bombshell evidence. Phone recordings, for "some" reason TIM and the police investigating never submitted to the sports tribunal. The first is a conversation between Moratti, Facchetti, and the referee designator, Bergamo, as well as the secretary of the Italian Referees Association, Maria Grazia Fazi. In the recording, they speak about a dinner the four had the night before an Inter 2-0 win over Livorno (which was back then, a team challenging for UEFA Cup) that was riddled with refereeing controversy. In addition, Milan manager Adriano Gallani who avoided Milan's relegation by claiming it was low level management (Meani) speaking with referees, is recorded on tape with the other referee designator, Pierluigi Pairetto. Information about the tapes are not completely available yet, but one conversation Milan had stated that referee designator Paolo Bergamno stated, “I just got off the phone with Moratti and he wants to have dinner with me and Facchetti about the referee situation.” This is was what started the investigation into Inter's relationship with the referees.

Theses wiretaps, which will come out more fully in the future, cast four huge doubts over the Calciopoli case:
i. Moggi was convicted of having an exclusively close relationship with the referee designators. Obviously, the other big teams had a very close relationship with Bergamo as well. (Pairetto and Bergamo always maintained they were in contact with other team managers as well. They claimed everyone was in contact, thus it was impossible for them to be favoring one team or another, as they couldn't favor everyone.)
ii. The missing Moggi tapes, used to convict Juventus become even more important. Where are they, and why have they been lost?
iii. Moratti and Facchetti claimed they never spoke with the referee designators, obviously they completely lied about it.
iv. If TIM and the police never handed these tapes over, what other tapes are there out there? Why were only the Meani and Moggi tapes introduced?

Lastly, these aren't from Tuttosport, this report is from a credible source, La Stampa. Knowing our management, they won't pursue anything, but I think I speak for all Juventini when I say FORZA MOGGI, keep digging!!