First off, perhaps to no one's surprise, Alberto Zaccheroni is officially not the right coach for Juventus going forward, whether he secures us fourth spot this season or not. After watching him substitute his way to his own demise against Napoli, one could finally conclude that he simply does not fit the bill as Juventus' head coach. More on him, and Sunday's game against Atalanta after the jump. 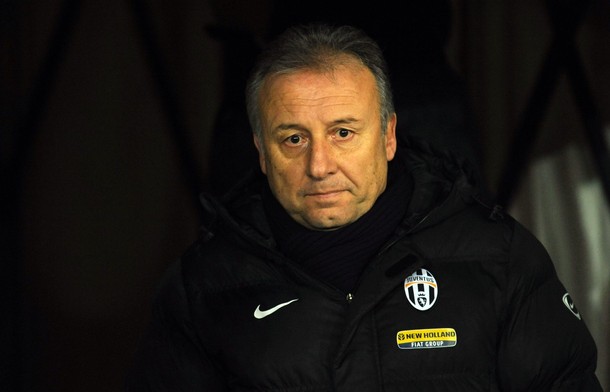 Let's start off where most of our games come to an end, the beginning. In true Juventus fashion this season, we took the lead against Napoli within the first ten minutes of the match, then we proceeded to suck. Obviously nothing new there, however the final straw came in the 66th minute when Alberto clearly decided to try and play for the draw. Simply put, watching Zaccheroni substitute Grygera in for Del Piero was one of the most heart breaking moments of my life as a bianconeri fan.

There we were, technically still in the game at 1-1, with our fading hopes of taking advantage of another week where Palermo hadn't captured full points, and our coach concedes the tie with close to 30 minutes remaining. Pathetic is one word that comes to mind. In my opinion, no team should ever play for a draw unless you're playing with less than eleven players. What's worse is that he did it in the least intuitive way possible, finally proving once and for all he's a completely mediocre coach at best.

To stifle Napoli's push forward, and more specifically to keep their full-backs and wide midfielders honest, Zaccheroni should have added Giovinco as a third forward instead of adding Grygera as our fifth defenseman. A substitution like that would've had two side effects. Firstly it would've made Napoli a bit more nervous going forward, and secondly we'd still have a fighting chance at scoring. Isn't Seba a better forward than Grygera is at defending anyways? Also, it's not like Amauri can do anything by himself once isolated, so by taking Del Piero off for Grygera he effectively took both strikers off as well.

Of course I'm assuming Seba was fit enough for a little run when I noticed him warming up on the sidelines at some point during the game. Oh well, what's done is done. Time to move on to our next horror show. Jae over at the Atalanta Offside put together a preview correctly chronicling Juventus' fall from grace this season, so stop by and do a little light reading if you care to re-open some old wounds. For now, I'll just shamelessly rip some stuff from him on the side from Bergamo:

There will likely be no changes to the side that beat Cagliari, except for Tiribocchi coming in for Chevanton who limped off injured in the first half against Cagliari. Doni will serve his final match ban.

Atalanta – W W L D L – Things have picked up as of late and hopefully that will continue as we make our last desperate grasp at avoiding relegation. Goals have finally started to go in.

A couple things to note here ahead of this home game. We had three weeks to mount a comeback in the standings and now there definitely won't be a fourth opportunity thanks to Miccoli's hat-trick against Bologna this evening. There's no one to blame but ourselves here people. Consider that a sign as to how the rest of our European efforts will fair. Also, as mentioned ahead of the game against Napoli this week, the ultras in both curvas are planning a mass protest tomorrow and won't be in the stands for the game. Here's the translated version, but you can read the orginal Italian piece on the Drughi's website.

"On Sunday March 28 during the game Juventus-Atalanta all the ultras groups of the Curva Sud and Curva Nord will abandon the stadium in protest against the owners, directors and squad. We are all definitively fed up of this arrogant administration, which is presumptuous, incompetent and good only with words."

"We can’t stand for any longer this team constructed largely by players who are unworthy of the glorious Juventus jersey, who do not respect or honour our colours and have the gall to insult those who have always supported this club."

Concise, provocative, and it speaks to the times. In similar news, reports are coming out of Italy that early Saturday morning, hundreds of leaflets calling for the Blanc and his colleagues to leave the club were found scattered outside the club's headquarters at Corso Galileo Ferraris in Torino. The leaflet's read "Disgrace - directors, go away" and "Never so low in 103 years of history." Now that's being proactive. It's time the management really get the message that we have them in our sights and enough is enough. Bravo tifosi!

In other team news, Chiellini will not be available for this one as he's recovering from a slight muscle strain suffered against Napoli. Legrottaglie returns from suspension, with Grygera, Grosso, and Zebina ready to go as well. In midfield, Camoranesi is suspended for reaching the yellow card limit so he'll be unavailable, as well De Ceglie, Salihams, and Poulsen who are still recovering from injuries. In attack, Iaquinta will not be available again, however Amuari, T-Rez, and Del Piero are called up. Giovinco is also available Zac, just in case you forgot.