Share All sharing options for: VIA BLANC E SECCO

We've officially hit rock-bottom. I figured losing 4-1 at home to Bayern Munich to get knocked out of the Champion's League was pretty close, considering we were losing tons of games and were already out of the Scudetto race, but we managed to do one more, losing to Fulham 4-1 when qualification should have been relatively easy to get bounced out of Europe twice in the same scoreline. It was all too familiar- an early Trez goal inspired some hope, a penalty showed the changing momentum, and the floodgates opened. It's kinda appropriate that while our best XI (more or less) was spanked by Bayern 4-1, our 2nd team was defeated by the same to Fulham. That said....I can't entirely blame the boys. 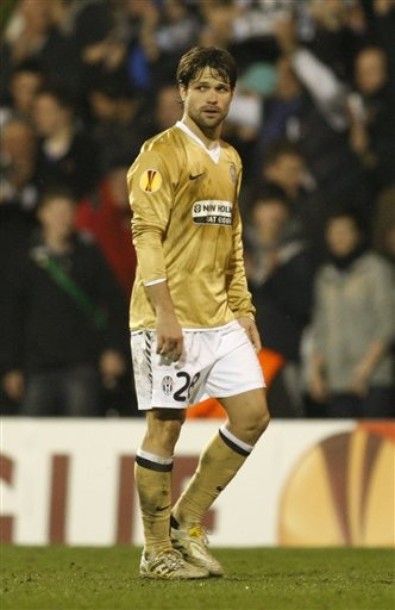 I still believe in him...

As I said, this game signifies rock-bottom for Juventus. In what has been our worst season since I've been a fan, we managed to make it even worse, it is embarrassing and I wish the season finished now, 4th, 5th, and 6th spots be damned. For some reason, some people care a lot about the UEFA coefficient, and some of them have said something along the lines of "Juventus must beat out Palermo for the 4th spot because Palermo will get bounced easy and humiliatingly so." Which is a stupid argument, because we'll probably do the same thing, who cares who goes through.

Why did we Lose Today?

I can't blame Zaccheroni or the boys entirely for this match, yet again, injuries determined our fate. When we came out with Chimenti, Brazzo, Zebina, Grosso, and Cannavaro in defense, the question was not "will we keep a clean sheet" but "how many goals will we concede?" When Cannavaro was swapped for Grygera, it only became more telling. We played the bulk of the game with 4 natural fullbacks, and most of them 2nd-string fullbacks at that, playing in front of a nearly 40-year-old keeper making his 2nd start in 2 years. The age of our defense started at 34, then was "only" 32 when they swapped. With Melo in typical bidone form, there was little protection afforded to an already weak backline.

An already weak backline that was also very poorly affected by the referee. To progress, this defense needed a neutral refereeing game. A defense composed of Buffon, Chiellini, Legrottaglie, etc, might be able to cope with some poor decisions (at least cope enough not to concede 4) but not our 3rd-string defense. Juventus committed 18 fouls, Fulham 15, and yet, all cards went to Juventus except for an 88th minute yellow for time-wasting. 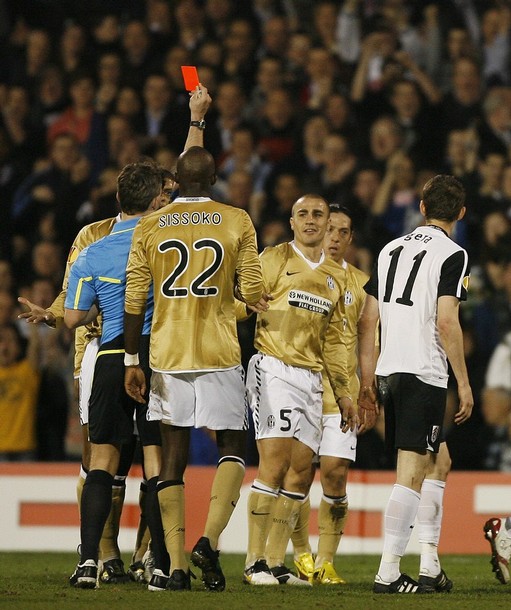 "You're kidding me, right?"

The straight red to Cannavaro was a joke that completely altered the game, and I'm not so sure if Zamora's first goal didn't involve a push on Cannavaro earlier. This questionable refereeing continued plenty in the 2nd half, Diego's handball seemed ball-to-hand and while you can call that a penalty, it's 50-50 and the decisions had already been going completely against us. It was already over when Zebina was sent off, but a straight red for his offense seemed extreme as well. There was fouls in all of these incidents, but a referee has to use a little discretion from time to time based on the severity. I find it laughable that all of these incidents were punished to the maximum, and yet somehow no Fulham player made ANY foul worthy of a yellow card the entire game. That's simply a joke.

But ultimately, all the responsibility comes down to Blanc and Secco. Their project has failed, miserably. Everything at Juventus seems like it has been assembled in hodgepodge fashion, with no organization, clearly done by people with no knowledge of Calcio. You can't just sign random players and hope that based on their previous form, they will fit in well at Juventus. Likewise with the coaching. I don't blame Zaccheroni because he had to field his 3rd-string defense, but our 3rd-string defense should be better than this, and that is squarely Secco's fault.

Having 3 CBs in a squad is suicide, and it's not hard to think of a situation where it breaks down- One player injured, one suspended, you're down to one CB. Then he gets sent off, you have none, which is obviously exactly what happened today. We can thank our lucky stars that Legrottaglie's suspension is 1-game, and that Chiellini's injury is not serious. If Chiellini was out for the next 2 months, and Legrottaglie's injury against Siena was more serious, we'd be completely screwed. I have no doubt that Ariaudo would have performed better than Grygera or Zebina at CB. You need 4 CBs at minimum to compete on multiple fronts. In 07-08, we had Boumsong, Legrottaglie, Andrade, Criscito to start out the season, as it progressed you can add Stendardo and Chiellini to the mix in place of Andrade and co. Last year, we had Legrottaglie, Mellberg, Chiellini, and Ariaudo which we all thought was thin.

Quote of the Day, from poster j- "will buffon, chellini, etc run out of patience?

Our fullbacks have been rubbish for the last few years as well. We have a lot of them, Zebina, Salihamidzic, Grosso, De Ceglie, Caceres, Molinaro, etc. Not one is a champion. Zebina, Salihamidzic, and Grosso are all old, mediocre, and only fit to be reserves at best. De Ceglie and Caceres are inexperienced and young, and while I believe they have great futures, their replacements are weak. Remember back when we had bench options like Pessotto and Birindelli to play fullback if needed? Not anymore, not by a long shot.

Most of this season, I've been arguing that our starting XI is full of holes, and that was highlighted by the Bayern game where we were thoroughly thumped, despite fielding a strong team. We've needed fullbacks, centerbacks, and passing midfielders for a while. I won't harp on Melo's uselessness because I think it is pretty much well established, on the contrary, this game, as deserving for the Europa League, highlighted Juve's poor mercato in finding reserves. 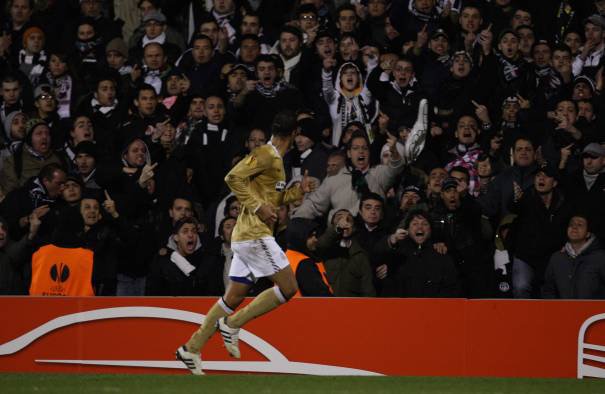 He should have left a long time ago.

The Buck stops with Blanc

Ultimately, Secco is responsible to Jean-Claude Blanc, and Secco's failings to build a powerful team despite all the cash means that Blanc should have canned him a while ago. Adding Bettega to the team is of huge importance, it adds someone who lives and breathes football, but that doesn't fix the last few mercati and it doesn't guarantee success in future ones.

Blanc is also responsible for the injuries- the last two years have been plagued by injuries, particularly last year, and that has only increased massively this season by about 55% to 58 injuries or so. Blanc is the President of Juventus, and it's his job to sort it out. Is it the medical staff? Is it Vinovo? I don't know, and I don't think anyone is positive. Whatever it is, it seems unlikely it's a freak accident. He needs to hire external teams to do research on Vinovo, have some oversight over the doctors, or get a 3rd-party to review training practices. He has not done anything, and that is also unacceptable. 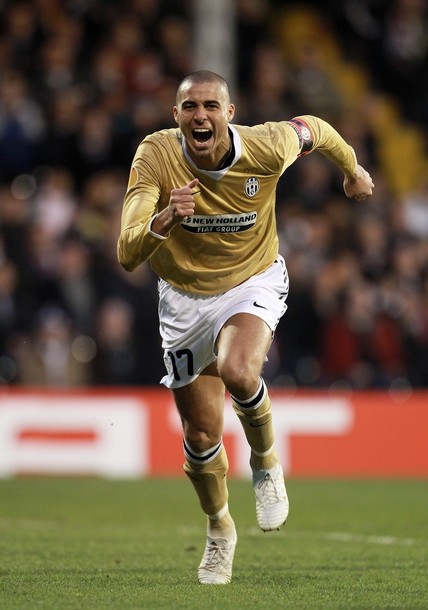 Cobolli Gigli's tenure as President of Juventus was relatively successful, and we had done a good job of getting back to a competitive level, we just needed a bit more quality. Jean-Claude Blanc's has been an unmitigated disaster, from the coaching selection, to the players, to everything. He needs to resign as President, and right now I'm wondering if it's even feasible for him to stay with the club in a financial role. Secco needs to get out as well, promote Andrea Agnelli to President with Bettega as Vice-Director, and get in people who know Calcio, like Marcello Lippi this summer, whether administrative, as transfer director, or even coach.

The Juventus Offside Shitlist:
-Amauri: (5 Weeks)
-Blanc: (Lifetime Achievement)
-Felipe Melo: (2 Weeks)
-Chimenti: (4 Week) On here until he stops playing.
-Grygera: (5 Week)
-Secco: (Lifetime Achievement)
-Zebina: (1 Week) From last week's JOS- For the record for other Juve players, here is how to get onto the list. Play like a bidone, and then tell the fans to STFU and “vaffanculo.” JZ clearly reads this blog.

I don't expect Blanc or Secco to have the balls to resign, but it's the only way for Juventus to move forward during the season which has been a colossal "Great Leap Backwards."