If you haven't heard of the Torneo di Viareggio, smack yourself upside the face. Like the Toulon tournament for national teams, the Viareggio classic is one of the most prestigious world competitions for youth teams. Held in Marcello Lippi's hometown, this is the 62nd annual tournament, always held during Carneval season. In recent years, Juve have dominated the tournament, confirming the tremendous talent our Primavera holds. We have been in the finals 5 of the last 7 tournaments, with our most recent win being last season. And perhaps you should pay even more attention this year, as while the senior team sucks it up, the Primavera is romping to victory, with 11 goals scored and 0 conceded in the group stages.

The tournament is an invitational, with 48 teams competing. The first section is the group stages, 12 groups divided into two sections, A and B. The winners of each group, and the 4 best runners-up enter into a 16-team playoffs. Most Serie A teams have a team in the tournament, many Serie B, and a few Serie C, Serie D, and Eccelenza representatives. The tournament also invites many worldwide teams, like Chivas, Red Bull NY, Spartak Moscow, Gremio, Maccabi Haifa, and Anderlecht of Belgium. After the jump, a review of the Primaveras completed games. 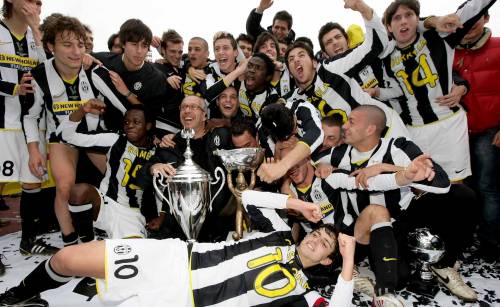 SUMMARY: Juventus started off from where they finished the last edition triumphantly. Then it was Sampdoria in the final, now it is a clear success against the Polish team of Lega Warsaw, who quickly conceded to the power of the bomber Immobile, at the 2nd minute with a header from an Esposito cross. The Bianconeri were clearly superior on the technical field, such as Belcastro and more disciplined in a center-midfield formed by Marrone and Giandonato. Excellent, also the goalkeeper Pinsoglio who stopped the Polish attack, saving a penalty at the end of first half. Immobile again struck with a double with a penalty in the 44th minute after an excellent move from Belcastro. There was a bit of trouble in the 2nd half, after a red card to Marrone in the 53rd minute, who stopped a Polish counter-attack by fouling the last man on Kosecki who has heading towards the goal. Some risks with the cross from Lisowski (60th minute) but the Bianconeri attacked again, with Esposito hitting the post in the 67th minute and then the third goal came with a great header from Alcibiade, a central defender with very good confidence in front of goal. (82nd minute) 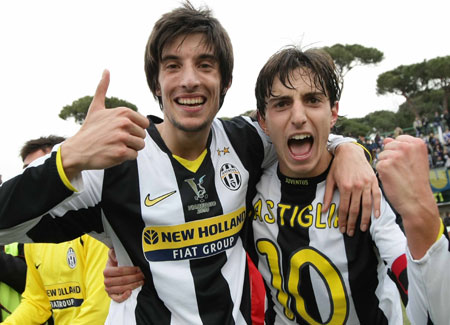 SUMMARY: Juventus marched on in their defense of the Viareggio Cup; After the victory against Lega Warsaw, it was Vicenza next to fall to the powerful blows of the Bianconeri. The game result was never in doubt, there were no problems for Juventus to bring home the 3 points against a Vicenza who started well, but were clearly inferior to Bruni's boys. It only took a few minutes for Juventus to demonstrate their intentions, in the 6th minute Belcastro was found in the penalty box from a great pass from Immobile and made no errors, burying it diagonally. It wasn't enough, as Juventus continued to attack, with Pirrotto blasting a venomous shot from the edge of the box, though Vicenza's keeper Pampaloni responded well. The second goal, however, arrived in the 30th minute and Ciro Immobile scored it, who put his head to a perfect assist from Esposito.

The game didn't change in the 2nd half, Juventus continued to dominate and scored the 3rd goal with a personal goal from Belcastro, who did well to spread the ball with a precise diagonal shot in the 52nd minute. The win was confirmed by Fischnaller in the 72nd minute, who just came on a few minutes earlier. Yago's umpteenth cross was met by Fischnaller with a great turning header. It finished with the Bianconeri victory, who left the field met by applause from the public watching the game. Many players looked excellent out there: Other than Immobile of course, Yago and Esposito played very well, and Bamba, the fullback of the defense, who did very well defending but also contributed much in attack with his pace. Another impressive young player was Luca Belcastro, who scored a double today and had many great plays, both on the wing as well as in center-midfield. He had excellent technical skills, and excellent vision for passing. 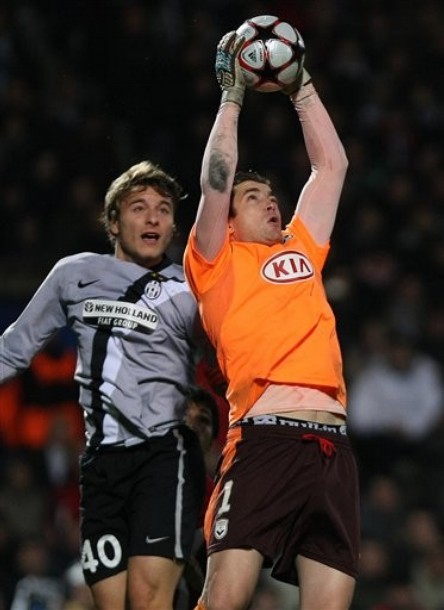 Immobile, who has played in the Champion's League, is the Viareggio top-scorer currently with 6 goals. He won the Golden Boot last year.

In the Torneo Viareggio, there was a preview of the two teams who battled at the Armando Picchi in Livorno, the teams of Zaccheroni and Cosmi. It was less interesting than the battle of the senior teams, as the Juventus coach, Bruni, almost already assured of finishing first, changed almost all of his starters, except for the center-back Alcibiade, though who played as a midfielder, since Marrone and Giandonato were called up to train with the senior team. It didn't start out so positively for Juventus, as Simeoni, a left-winger for Livorno, messed up a perfect opportunity, after a very big error from Kirev, who came out for the ball and missed it. The rest of the first half was relatively boring, with two defensive lines playing very high, plenty of offside calls made, though a good performance from Ceccherini, a central midfielder born in 1992, who anticipated well, passed well, though left the pitch in the 56th minute because of injury.

What changed the match was a error from Conti, similar to that of Kirev, though Fischnaller played like a true poacher, inbetween Oussou and Ceccherini, finished well. The second half was all Juventus; Libertazzi doubled the scoreline in the 76th from an assist from Alcibiade, in the 80th minute Fischnaller doubled his tally with a brilliant solo move, and in the 81st minute, Belcastro closed out the match scoring the 4th goal. In the 68th minute, Juventus player Pirotta was sent off for a 2nd yellow card, at the same time Livorno's coach Ruotolo was sent off for his protests to the referee. In the stands was Alessio Secco, watching the game before traveling to Livorno for the match of the senior team.

Juventus Coach Luciano Bruni- "I wanted to experiment a bit, and give some time to a few players who have played little or none, to give them time to prove themselves. I had the response from them that I wanted, though we played well, there is always something to improve. Alcibiade played excellently, he gave me his availability to play this 3rd match, and played with dignity and awareness. First position in the group is the award to start the tournament for us, but it's not enough for us to be content with that, it is not in our DNA. I hope to see a few players physical conditions improve, and whoever we play next, might seem simple, but we will not underestimate them. It will not be easy to recover physical energy quickly, since we saw our players played 90 minutes in the rain, though with our mentality, winning will always help. To change, we need to calm our nerves a bit, as we had our 2nd player sent off in 3 games.

Gennaro Ruotolo: "I'm not sure why I was sent off, because I was limiting myself to chatting a bit and asking for explanations from the linesman. I can't say that the referees really convinced me, but to send me off in our last match doesn't really make sense. The game was changed from some of our errors, it seemed to me that up until this incident, we were playing better and we were getting close to taking the lead. I am happy with the performance of my players, who played with dignity. We leave the tournament with our heads held high, despite the heavy defeats we have had, in a group that had some of the strongest European teams; Lega Warsaw, and Juventus who are the strongest youth team in the world. 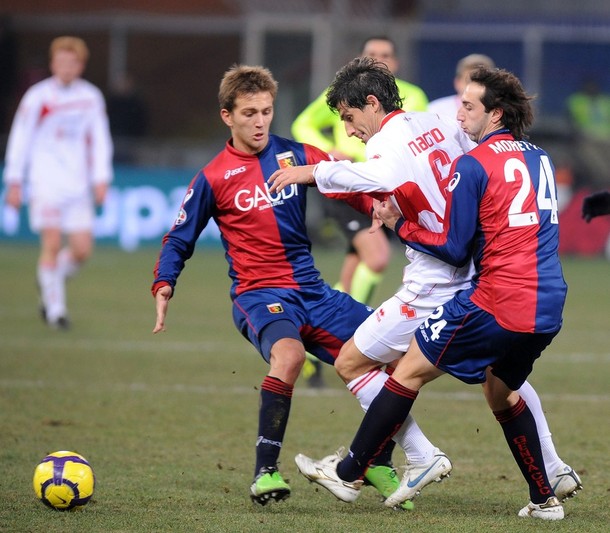 With a sumptuous hat trick, Ciro Immobile brought Juventus to the quarterfinals of Viareggio, after the 3-1 victory won against an excellent Cesena. The game opened up in the 38th minute, when Immobile received a long precise pass from Yago, controlled the ball, and beat keeper Teodorani who was coming off his line. Cesena battled hard, and after 4 minutes in the 2nd half, found the tying goal in the 49th minute from Tabanelli, who anticipated everyone at the near post, and turned the ball excellently into the net. Cesena, however, had not yet fully met "Ciro the Great" who scored with a brilliant half-bicycle kick on a corner, putting the ball under the net. He later added to his tally by converting a penalty coolly, won by Yago.

Ciro Immobile was definitely the great protagonist of the game, but many of the Juventus attacks were stamped by the authority of Yago, who returned in January from a loan to Bari. The ex-Barcelona man played at the top of a 3-man Juventus supporting attack, with Esposito and Belcastro, supporting Immobile up top, though there was excellent interplay on the wings. Yago had excellent technical ability, excellent vision, and executed his plays very quickly, there were the most important evidences of his excellent play, as shown by his assist for the first goal. He still needs a bit of continuity, because he sometimes fades out of the play, but it's an aspect that can certainly be worked on and improved.

Luciano Bruni: "We knew that the game wouldn't be the easiest, because Cesena proved in the group stages to be a very well organized side. We had perhaps the luck to go ahead, but then conceded stupidly an equalizer. I liked the courage of the team to press on after conceding. The weather wasn't exactly optimal. We don't put limits on this team, and we live game-for-game. We have an excellent squad and the quality still yet to show.

Stefano Protti: "We played a good game. We were able to equalize, but Immobile scored a great goal and we went behind again. We wanted to keep the game in balance, but then there was a penalty given that I didn't like at all. If we were to play a team a bit inferior, then we'd be able to cope with it, but against Juventus that was not possible. Without the penalty, perhaps we could have played to win, but it closed the match. Fiorentina and Juventus are great teams, Fiorentina is more compact and disciplined, but the Bianconeri have a lot of individual quality that Fiorentina lack."

All of the above game statistics is from the Viareggio website, most summaries are from CalcioMercato and have been translated by yours truly. Roma, Inter, Milan, Napoli, and Genoa all fell in this round, so they will not advance to the quarterfinals. The draw has been made, and Juventus will play Sassuolo next.

For more information on some players in the Juventus Primavera, check out this post from a few months ago.