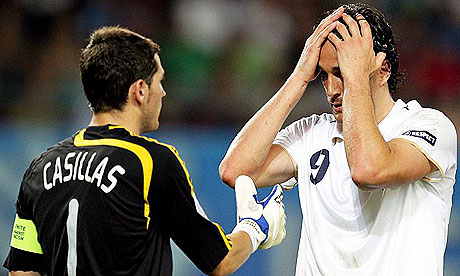 I have done a double translation on Luca Toni's outburst, taking the Italian to English translation and doing one more: translating it into what he meant.

“If he only chose Italy because Brazil dumped him, then it’s not right that he should be our centre-forward.

"I'm jealous that I was only rejected by one National team. Anyone named Luca Toni should be starting for the Azzurri, instead of some Brazilian."

“In any case, there are many talented strikers in Serie A, including those who do not necessarily play for Juventus, Milan or Inter.

"I scored 31 FREAKING goals for Fiorentina in one season. I scored 39 for Bayern in one season as well. Why don't any of the big clubs want me??"

“I’m sure that if he is in good shape, Amauri will go to the World Cup. I will give it my best shot.

"I officially throw down the gauntlet to Nicholas Anelka for the title of "Le Sulk."

“Indirectly, Lippi let me know that he is following my progress.”

"Lippi's assistant's cousin told me he hears I'm back in Italy, somewhere."

Simply put, this is a ridiculous interview to give. First of all, Amauri is shit and shouldn't be playing for Juventus, few are seriously talking about an Azzurri call up right now. Second, most of the Amauri-to-Italy speculation was from his slimy agent, Grimaldi, and the press. I'm sure Amauri is as annoyed about being asked about it as Lippi is with the Cassano question. Third of all, I don't care if Luca Toni scores 100 goals for Roma in the next few weeks, he shouldn't be starting for the Nazionale. Before WC06, he had scored 31 goals for Fiorentina. Before Euro2008, he scored 39 for Bayern with 24 being in the league. In both situations, we made him our starting forward and built the team around him. In both situations, he was an utter failure.