Drawing at Home is an Improvement

Share All sharing options for: Drawing at Home is an Improvement

That statement alone shows how far we have fallen. A draw at home was enough to improve our recent home record, something like four losses in a row, not all of them deserved, but losses none the less. I know it's a bit late, but I felt like reviewing the game to see what improved, and where we might go. 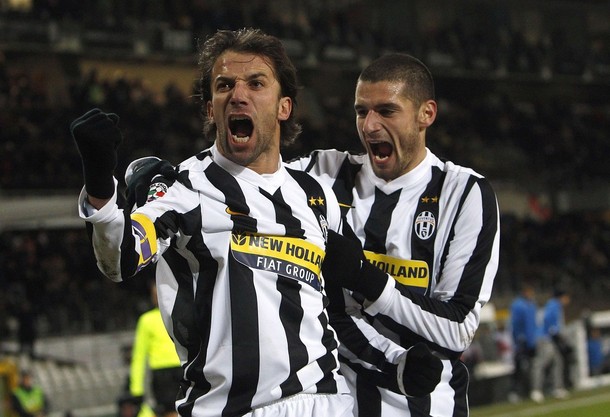 Manninger: 6.5- Made a great save on one of Lazio's two shots of the game. The other went in, and he couldn't do anything about it. One of those days.

Grygera: 5- He didn't look physically fit the entire time, looked like he was struggling with a knock. Lazio sat in their own half the whole game, so you'd expect him to venture forward. His impact offensively was non-existant and when switched to the left side, he was beaten to the goal. A mediocre showing.
Cannavaro: 6- Had very few problems coping with Lazio's attackers. I still think Legrottaglie should be starting over him, but in this game we probably could have started Chimenti at CB and not had too many issues, such was Lazio's attackers poor form, the defensive nature of the team, and Chiellini's great form.
Chiellini: 7- Had Lazio's defenders locked up from the first minute...and almost had a chance to score. A rock.
De Ceglie: 7- I was very pleased with De Ceglie out there, who has been inconsistent in recent weeks but definitely has talent. Continuity would do him very well. He had pace, something our defense sorely lacks, and unlike Grygera, was continually beating his defender to the ball in the Lazio half. Delivered several very inviting crosses that no one managed to get on to. Still effective when switched to midfield with Caceres introduction.

Candreva: 6- Decision-making isn't quite there yet, but for his 2nd appearance for the club, it was very encouraging. Some great passing, enjoyed taking Lazio players on, and for the most part, did well to hustle back and chase Lazio players down.
Sissoko: 6.5- I think we can all agree he'd be more effective if someone would just tell him to curtail his forward movement, but even so, he had a very solid game. The "headless chicken" running is often mocked, but sometimes you just need someone who follows the other players and pressures them, particularly when our midfielders often seem to be lacking energy.
Felipe Melo: 6- Slowly but surely, looks like he may be getting his confidence back after an absolute disaster over the last 2-3 months. Did his job, though he still makes plenty of unnecessary fouls. 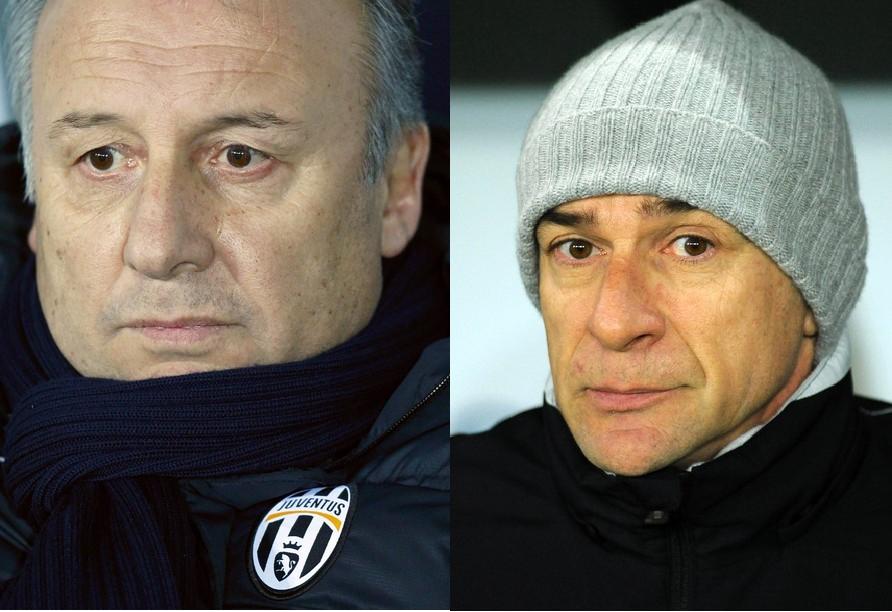 Anyone else see a similarity here?

Diego: 6.5- I don't get why people are picking on Diego. Sure, he's not dragging our team to victory by himself, but he's looked determined and in form over the last few weeks. Needs to simplify his game a bit, but he is a very good creative option and does well to hold the ball under significant pressure. Had an excellent shot that hit the post.

Del Piero: 5.5- Today's performance is the one that suggests he can't play 3 full games in 7 full days. Few players can, and not a 35-year old. Looked a bit tired and slow, though he combined pretty well with Diego and I'm sure the rest he gets this week means he'll be raring to go this weekend.
Amauri: 5.5- He wasn't an absolute disaster this game, I'll give you that. He did alright to hold up the ball and flicked some passes on with his head. That's nice and all, but if there isn't another player up front, it's kind of pointless. My beef with his performance is two things- #1, a striker should be scoring. Amauri hasn't scored in 3 months, and he doesn't look like he's going to. #2- a striker should be making runs. Service hasn't been great over the last few weeks, but Amauri doesn't make enough runs anyways. If Trez or Iaquinta weren't injured, I guarantee they've had scored a few goals in this timeframe.

Zaccheroni: 6- He's got a lot of work to do, as Roberto outlined yesterday. Yet again, we gave up when we took the lead, we conceded off a set piece, and we didn't look threatening in front of goal. That said, I think it was an encouraging display...but I don't know how much credit we can give to the team or Zaccheroni. It may have just been Ballardini's tactics why we had the lions share of the possession. Having conceded after scoring, off a set piece, I could only grin when Paolucci was sent on with 7 minutes to be our hero. Some things don't change. 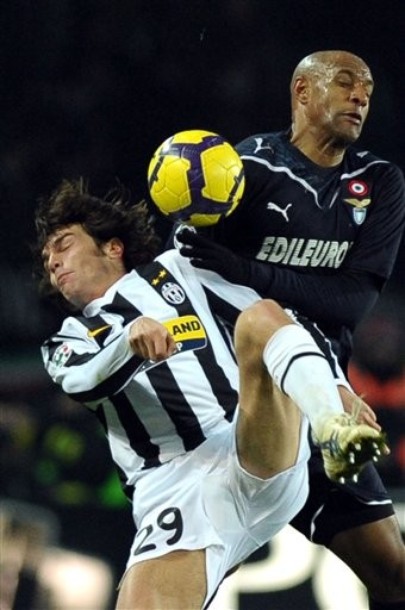 Things I think I think:
#1- Wow, did Lazio play like a relegation-threatened team or what?! Ultra defensive, playing classic catenaccio, and parked the figurative team bus in front of the net. I'm not criticizing them, you go with what tactics work and if 1 point is what Ballardini wanted in Turin, then he's justified. Credit to Lazio for snuffing out our attack. Two thoughts on the catenaccio though- First, I don't think it's always a good tactic and while it might have been Sunday night, I hope Lazio aren't playing like that in general. Few relegation-battling teams that go out and attack get relegated. The classic parking-the-team-bus happens all the time, though. Secondly, the catenaccio tactic is for a team that is tactical, but doesn't have quality. Lazio has the quality to play a real game in their team, so I double-doubt whether its' the best tactic for them.
#2- The penalty incident...of course it provoked a lot of "Rubentus" and "Ladri" comments, but it's a bad call, and no Juventini are denying it was a non-penalty. Del Piero himself said if they had given it against us, he would be angry, and if you watch the video, ADP isn't appealing for the penalty at all, contrary to Ballardini's thoughts. It's the second penalty we've gotten called for us all season, one would expect if Blanc+co. were fixing the championship, we'd get a few more than 1 every 11 games. Then again, they are fairly incompetent.
#3- Takeaway point from this game for me, De Ceglie needs to play more at left-back. Grosso has been nothing but a liability the past two months, and he's not a long-term solution. PDC is 23, and a Juventino to boot. Simply put, I think it's hard to say that Grosso is playing better than PDC, and if they are at the same level, why play Grosso? Worse scenario, we sell PDC 1-2 years down the line for a higher value.
#4- Milan drawing to Livorno this week was very disappointing. Yet again, Inter are the runaway winners of Serie A and it just makes me want to bury my head in the sand. It's not just the fact that I utterly despise Inter, it's the run of any team dominating for this long, and so easily, that makes it boring. (other than Juventus, of course) If Milan had won their 4th/5th/whatever-you-want-to-call-it in such easy fashion, I'd still be yawning. 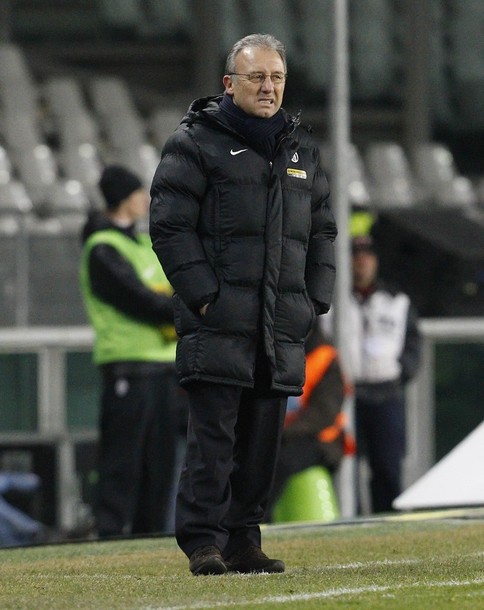 Why, oh why did we give up having just scored?

#5- The Mercato closed today. I'm not gonna bitch and moan about Juve's non-moves on the market, because frankly, we don't have any money. What I will bitch about is not using the players we acquired. Candreva looks like he'll get a fair amount of playing time, but if Paolucci keeps coming on in the 88th minute every other game, what a stupid move it was to bring him back, for him, us, and Siena. With Trez returning soon and hopefully Iaquinta, he'll see even less of the pitch, though he should be playing ahead of Amauri right now. At least he moves.
#6- Speaking of the mercato, what a classic finish to it, the Genoa-Parma-Atalanta triangle. Only in Italy. Crespo moves from Genoa to Parma, who sends Amoruso to Atalanta, who sends Acquafresca back to Genoa as Crespo's replacement. Musical chairs, they should just live in each others houses/apartments while they are at it.
#7- Of all the managers to replace Ferrara, I like the idea of Zaccheroni, though I'm not sure I want him on the bench next season. He's fairly experienced, he's Italian, and he's old. The Benitez rumors worry me, because I can easily see him arriving this summer and I do not like him, at all. Sure, he's a great tactician but his man management is poor, he has failed to develop any young player at Liverpool, his transfers have been disasters, and he whines, a lot. Hate Ciro if you want, but he accepted responsibility when he screwed up. Rafa always blames it on the referees, the weather, the management, anything but himself.
#8- I hope you've seen Okaka's game-winning goal against Siena from this weekend. What an absolutely absurd attempt for a young inexperienced striker who rarely scores, yet that is (partially) why it is so brilliant. He's black, too, and I don't see anyone objecting to him playing for the Nazionale.

That is all for now. Sempre Juve!!