Juventus travel to Amsterdam to take on an Old Foe

Share All sharing options for: Juventus travel to Amsterdam to take on an Old Foe

Why are we in Amsterdam again? Maybe Camoranesi ran out of his stash and needs to load up on some brownies. If he does, we should all hope he plants them on Amauri for the flight back to Turin, or manage to get Zebina stoned off his ass and get lost in Schiphol. (which is a legitimate possibility; that airport is massive, it's confusing, and that's when you're sober.)

We're embarking on our Europa League campaign, which still feels like a Coppa Italia, except it's the first one, so there's kind of a desire to win...kind of being the operative word. We were the first to win every Uefa tournament, there are teams like Atletico, Liverpool, and oh yeah, Ajax, but still...since we won our last Champion's League, they ruined it, and as a consequence, the Uefa Cup sucks. A nice little rebranding, getting rid of the odd 5-team group stage, and the Europa League still sucks. So pardon me for being relatively apathetic about this whole tie.

Coincidentally, the last time the Champion's League was a real proper "Champion's League" (winners of each league, not the top 4) we defeated Ajax in the final, and now we've been drawn against each other in the first Europa League, an attempt to make Uefa's ugly stepsister relevant. We beat Ajax 1-1 in the Stadio Olimpico di Roma, winning on penalties, and that seems like ages ago. Ajax had won the tournament the year before, and our victory caused some serious tensions in Amsterdam; there was a divided pay scale between the black Ajax players, many of them from Suriname, which eventually caused players like Seedorf, Edgar Davids, and Kanu to leave Amsterdam.

Neither us, nor Ajax, are the same team we were back then, (hence being in the Europa League) Ajax's fall-from-grace came a bit before ours as the team started disintegrating in the late 1990s, and they are no longer the powerhouse they once were. That said, they still are producing talent- Wesley Sneidjer, Ryan Babel, Luis Suarez, Huntelaar, Ibrahimovic, and Van der Vaart all developed at Ajax.

RECENT FORM:
Juventus- Slowly but surely improving, though clearly it is because of a FIGC conspiracy to get us into 4th place. In a few weeks we might be ready for this game, but we're still playing mediocre. It's better than a month ago, though.
Ajax- I don't pay ANY attention whatsoever to the Eredivisie, frankly, I'm impressed I can even spell it. A quick look at the table shows Ajax is in 3rd place, 9 points behind 1st place. That doesn't seem to tell the whole story though, as Ajax has scored a whopping 65 goals thus far, 13 more than PSV and more than double every team in the league save 2 teams.

FORMATIONS AND LINEUPS:
Juventus- Cannavaro and Iaquinta stayed behind for the trip, and their spots on the plane have since been replaced by Alena Seredova, Beatrice Trezeguet, and Sonia Del Piero. (Though only Sonia traveled on the same flight as the team) Poulsen is still recovering, but other than that, the only injury is Chimenti, who has alzheimers or something and is replaced by Pinsoglio. Holy shit, that means we almost have a full squad, you can almost count 1-21 without any breaks. So Zaccheroni has nearly the full team at his disposal, though one would imagine Trezeguet and Camoranesi won't be rushed back from injury. I'm guessing a 3-4-1-2 similar to that of this weekend.

The question of the day is the center-midfield. Shit don't change, that's been our perennial headache since Serie B. Melo and Marchisio are available, Marchisio came on as a cameo this weekend and played wonderfully, and Melo is shockingly, not suspended for the match. Sissoko and Candreva are hanging around, I would personally hope for one DM, and one CM. So no Melo-Sissoko, because barring the creativity issues it presents, it's a surefire red card in there. Personally, I'd go Sissoko-Marchisio: It's tough, yet effective.

I'd hope De Ceglie gets another start over Grosso, who just generally looks worthless whenever he plays, particularly in an advanced position. Up top, I am not quite as adverse to Amauri starting, Trez shouldn't be rushed and as long as he doesn't bitch and whine the whole time, I'm semi-ok with Amauri playing. 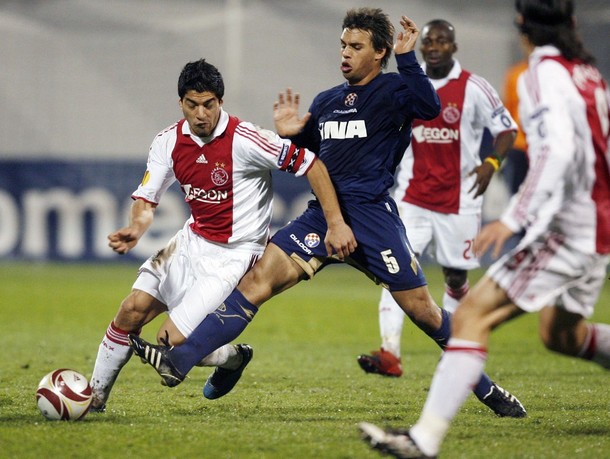 Ajax- Shamelessly copied from Goal.com, because like I said, I don't know anything about Ajax or their league.

It's a shame Ajax has become the mediocre team it has, I believe it's a casualty of the diluting of the Champion's League. Nevertheless, they are scoring a lot of goals and are being led by a pretty competent coach, Martin Jol. I think a 1-1 draw is a likely result, and a decent one for us.

«Juventus and Ajax are similar in a certain sense». This is what lancers’ coach Martin Jol thinks. A great name, many expectations and a common objective: «Juve is a great team even though it is under reconstruction and had a few problems, just like us, after all. We, like the bianconeri, are fighting in the championship to qualify for the Champions League and just like Juve there is always great pressure on Ajax».

The Dutch coach did not let the cat of the bag with regards to the formation he intends fielding: «There will be a few novelties but you will see them tomorrow», but identified the Juventus player who he would like to have in his team: «I would sign Amauri, but only on a free transfer», Jol underlined leaving to intend that Ajax cannot afford the Brazilian’s transfer fee.