The Gazzetta had a report today, saying that Bettega and co. are planning a summer revolution of the squad, and named 11 players who would certainly stay, and suggested others would get the chop. This post is a review of the Gazzetta's selection and some of my input on a summer revival.

Confirmed to Stay: The Gazzetta says Buffon, Chiellini, Sissoko, Marchisio, Diego are seen as long-term anchors of the club, and therefore will be staying. Players like Poulsen, Grygera, Salihamidzic, De Ceglie have supposedly impressed with their determination and professionalism and will remain. Legrottaglie, despite his age, will remain as he has been in relatively good form and is at worst, a capable reserve as a center-back. There is no mention of Iaquinta, but the team has reiterated in the past that they believe in Vincenzo, and I agree. And of course Del Piero will be along forever, as the Gazzetta says, "only he can decide to pack his bags."

In Limbo: Caceres and Candreva are in the same position, as their future with the club depends on negotiations. The management likes both of them, but does not want to pay 11million euros for Caceres or 8.5million for co-ownership of Candreva. Felipe Melo's position depends on three things- how much we could sell him for, if his play improves over the next few months, and ultimately, if he's in the plans of the new coach. The management is not impressed with his indiscipline or his performances. Giovinco it depends on him...as the Gazzetta says, he must decide whether to risk "another year at a club that has not proved to believe in him."

Leaving Turin: The Gazzetta suggests Cannavaro's option for a 2nd year will not be exercised, and Grosso has ultimately been a flop and will be offloaded. Paolucci, Tiago, and Molinaro will be loaned out or sold. Amauri will be the first to be offloaded, and the management will try and get the most for him. The last question is Zebina, Camoranesi, and Trezeguet, each 32 years old, each with a large contract that expires in 2011. Zebina doesn't deserve to be in the category with the other two, he needs to be booted out in 2006. Camoranesi and Trezeguet, the paper says, will not have their contracts extended in 2011 and so, perhaps the management will cash in on them before the contracts expire.

In general, I agree with much of this Football-Italia blog. Below is the full squad, and how I would run things. One note about it- sure, it's fantacalcio, but so is the Gazzetta article. The idea that we could completely overhaul our squad in a summer is unlikely at best.

PORTIERI:
Buffon- Untouchable. The only reason to sell him would be to get a lot of money, which we don't need. Staying.
Manninger- His contract ends in 2011, but he's been a very capable reserve and I don't see why he should leave. Staying.
Chimenti- Promote Kirev to 3rd-place keeper, or let Chimenti stay on the bench. I'm sure his wages are extremely low, so it really doesn't matter. In Limbo. 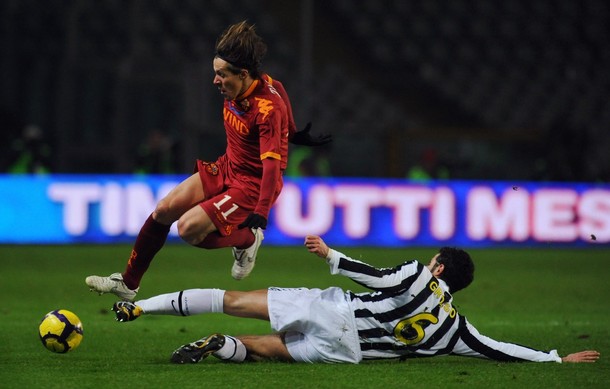 DIFENSORI:
Caceres- You all know I like this kid, and I think we haven't even seen his full potential. Negotiate it down to 8million or so, given that Barcelona and Guardiola don't even seem to want him. Staying.
Cannavaro- We swapped Olof Mellberg for Cannavaro? I think they are on equal level, Mellberg is 4 years younger, and he doesn't come with Cannavaro's baggage. Leaving Turin.
Chiellini- Probably even ahead of Buffon, he is the first player to stay in Turin. (after Alex, of course) Staying.
De Ceglie- I like his versatility, whether playing as a center-midfielder, a winger, or a fullback, and I think he can be a very good fullback. He has pace, he has crossing ability, his defense is at least at the level of Grosso's, and it can improve. He needs to be given plenty of playing time. Staying.
Grosso- He's certainly been a flop, and it's hard to believe, but he sometimes makes me wish for Molinaro back. If we can offload him for the same amount we paid for him, do it. Leaving Turin.
Grygera- Like the Gazzetta says, I like his professionalism and his demeanor. He can play any position in defense, and he's not that old. Staying.
Legrottaglie- SKY's man-of-the-match against Livorno, he's proven this season that despite being replaced by Cannavaro, he's still determined. Capable, and age doesn't seem to be an issue, pace has never been his key attribute, but, a capable reserve at worst. Staying.
Zebina- I am biased as hell against Zebina, but I don't see any reason why he should stay. He's on a high salary, he's been perennially injured the last 2-3 seasons, he's mediocre, and he's 32 years old. It was a huge mistake to offer him a contract extension in 2007. Leaving Turin. 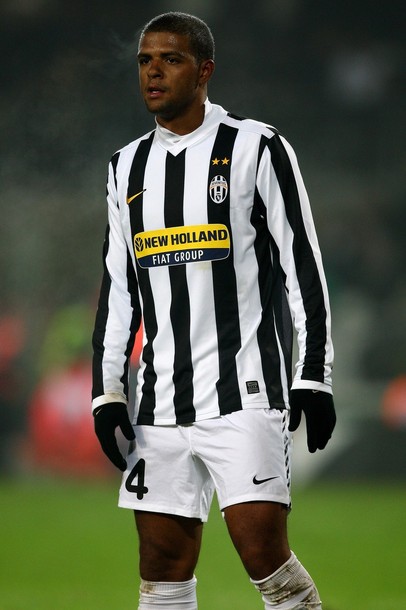 So many games, he's completely clueless.

CENTROCAMPISTI:
Candreva- Valuing him at 17million is high. He's only been here for a month, so it's too early to judge him, but I like what I've seen thus far. In Limbo.
Camoranesi- The Gazzetta suggests he will be offloaded because of his high salary, his age, and his injury-prone status. Given this, and the fact he has 1 year on his contract, I don't see us getting more than 4million euros, and that is not worth it for his importance to the team. Are we better off with the 2.5million euros from Cristiano Zanetti? Or would it have been better let his contract run out. Staying.
Diego- I disagree with most of the criticism he's received this year, and despite a lack of support in midfield and a player as piss-poor as Amauri up top, he's played well. Not what we were hoping, but pretty well. Better players around him will bring out his talent. Staying.
Giovinco- I agree with the Gazzetta, he needs to consider his future. If the new manager doesn't demonstrate faith in him, he should leave for his own sake. Hopefully someday we'll see him return. In Limbo.
Marchisio- No uncertainties for Marchisio, who is one of our best midfielders despite his young age. A model for the Primavera players. Staying.
Melo- I didn't like his signing to begin with. Even before we were linked with Melo, I said this about the D'Agostino deal collapsing. "D’Agostino deal looks like it’s dead...Shame, now Secco is probably going to pick up yet another mediocre DM." If we can recoup a significant amount of his investment, boot his ass out the door. In Limbo.
Poulsen- The Gazzetta says his performances this season have won over some in the management, along with his professional demeanor. The latter I appreciate, the former I am not decided yet. He's played better this season than in past, but is it good enough to stay? For me, he's a "wait-and-see" for the rest of the season. In Limbo.
Salihamidzic- Ditto to the Gazzetta article. His wages are pretty low, he's a decent utility player, and I like the guys spirit. His contract ends in 2011 and won't be renewed, but I'm down with one more year of Brazzo. Staying.
Sissoko- If only he wasn't so injury-prone, he could develop into a world-class player. That said, he's a solid player and pretty young. No doubt he'll be around. Staying. 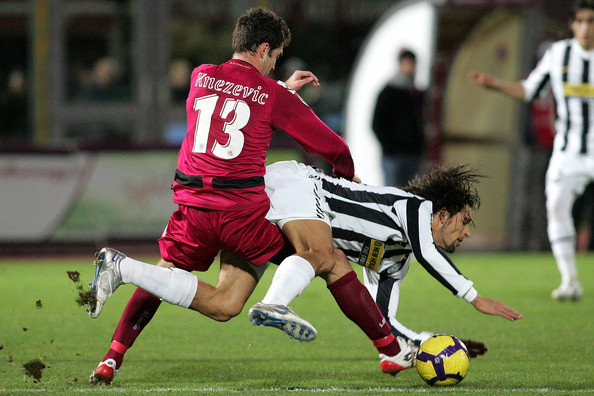 He got marked out of the game by "Him." Seriously.

ATTACCANTI:
Paolucci- Immobile will replace him as the "young talent in the squad that inexplicably never sees any playing time" so he'll likely go out on loan. I feel bad for him, what a fucking dumb move to recall him for one game. Leaving Turin.
Amauri- I don't have to explain. Send him back to Palermo. Leaving Turin.
Alessandro Del Piero- "Only he decides when to pack his bags." Indeed, Gazzetta. Staying.
Trezeguet- Along with Camoranesi, he's the other "big question." He doesn't quite have the importance that Camo does to the squad, but he's not really injury-plagued like Camo either. I see no reason to sell him for a few million euros, particularly when he's our best forward this season. He's the only one who really seems like he's going to score when he plays. Staying.
Iaquinta- Is there any doubt about Vincenzo's commitment to our club? No. The man produces goals, and that's his job. Staying. 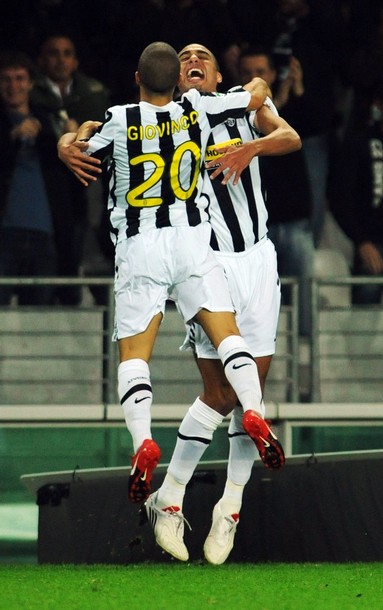 I hope to see this many more times...this year, and next season.

It's Mardi Gras this weekend, so Roberto will be taking control of the ship. Sempre Juve!!