Catania-Juventus: Bianconeri Away, but still a Home Game

Share All sharing options for: Catania-Juventus: Bianconeri Away, but still a Home Game 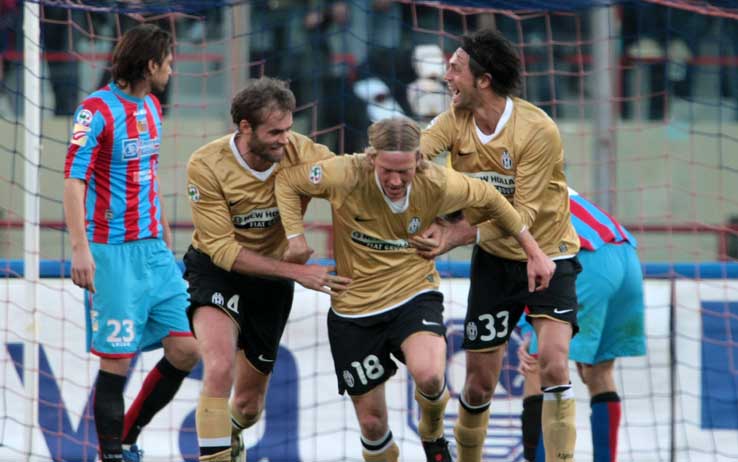 This evening Catania vs Juventus
From Poznan freezing weather to Catania warmth. Juventus dive back into the Championship with the strong intention to delete their delusion for Europa League elimination and to keep going up in classification.
But Bianconeri engagement is anything but easy: Catania is the only Serie A team to have always won on friendly ground, where they obtained 15 points, out of total 18 collected so far. Not only: at the “Massimino”, the Sicilians are winning since 13th December 2009, when they were defeated by Livorno, and in this championship they have the second best home defense, having suffered only 3 goals.

Juve, from their part, have the most prolific attack and very respectful marching orders far from the Olimpico, embellished by last away matches: in fact, on the last three away matches, the bianconeri obtained two victories, vs. Milan and Genoa, spaced out by the draw in Brescia. Moreover, there is a particularly reassuring statistic data for the bianconeri: on the matches vs. Catania trainer, Giampaolo, Juventus has always gained three points: when he led Cagliari, as well as when he was leading Siena, Giampaolo has always been defeated and on five occasions, his teams suffered a total of eight goals.

Del Neri: «This Juve never give up»
«We did all we can to pass on to the next turn and the result is not mirroring what seen on the pitch. Our elimination comes from the fact that at the beginning of this Competition, we still had to know each others, and we left many useful points behind us». Luigi Del Neri, on the press conference held on the eve of the challenge vs. Catania, before focusing on the match, goes back to the one in Poznan. A match with a bitter taste, but which showed Juventus character: «I’m sorry we went out, because we cared about Europa League and nobody can say Juve, in Poland, haven’t tried it all to win. This is the positive aspect, because it proves the team’s will of never giving up, on any match».

So let’s go back to the Championship, well aware of being able to play an important role: «We need a well-established leader. Milan and Lazio are doing important things, but for the time being, we all worth the same. We do all we can to achieve the best result, each Sunday, we did well so far and we are at classification’s third place. We had a difficult start, as expected, but then we found a good rhythm. Too many draws? Well, on home matches we drawn vs. Roma and Fiorentina, not two very little teams, and on away matches we achieved important victories».

Juve has improved a lot since the beginning of the season, but the growing process has not ended yet: «We need a little attention more. On the last two matches, we only suffered goals on free kicks, so we must focus more attention on that and we won’t suffer such goals».

Concerning the match vs. Catania, Del Neri underlines the match’s difficulties: «Catania has got nothing to lose and they are a very fast and well trained team. They’ve got players able to kick to the goal, and we’ll find an atmosphere very similar to the one found in Genova, with supporters boosting the team from the first moment. There will be 30 degrees more than in Poland? I don’t know if this is going to be a problem, but also this one may be a heavy factor». Juve will go to Catania without Marchisio and so it’s likely Del Neri is going to address to the two externals: «Sissoko’s and Claudio’s characteristics are different, and I think the solution with the two external players is the best».