The Old Lady Slays the Devil

Share All sharing options for: The Old Lady Slays the Devil

What a lovely game. 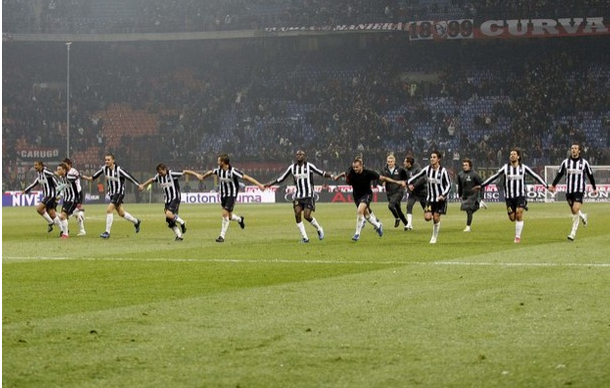 Juventus traveled to the San Siro just a few days before our 113th birthday, and boy, did the Old Lady look banged up. No Krasic, no Chiellini, no Prima Punta....no problem. We played a tactically brilliant game, everyone sacrificing for the side and came away with a 2-1 victory, the first time we defeated Milan at their home since 2005, the last time Mediaset/Milan the FIGC suspended our best player. And in the shadows of the night, Allegri and Milan had a big wake-up call: Surely, they will not be able to ride their superstars to Scudetto glory, it will require much more. For us, the growth of our side defensively and tactically continues to improve and perhaps, put a little hope into Bianconeri hearts.

Storari: 6.5- Never had any miracles to save, but had to stay attentive and be smart. Did his job very well against his old squad.

Motta: 5- Didn't read the play well or make tackles with assurance. Another relatively poor performance.
Bonucci: 6- Was troubled occasionally by Ibrahimovic, but otherwise played another very solid game, confirming that he is Juve material.
Legrottaglie: 6.5- Came into the coaches plans in the last few minutes of warm-up, as Chiellini suffered a minor calf injury and failed to recover. Played immaculately at the back, marshaled the backline well.
De Ceglie: 6.5- Has really grown into his role as a left-back in the last 2 months, such a shame he is out for so long. Looked confident in marking and tackling, and of course, his crossing was money as usual. 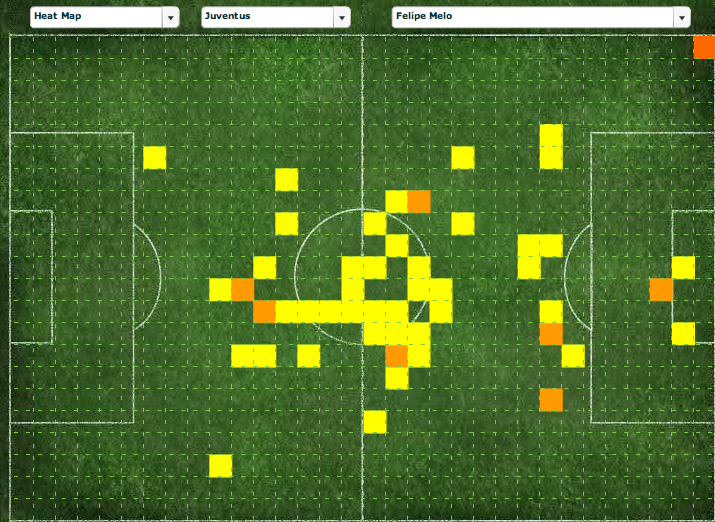 Marchisio: 6.5- A very intelligent and tactical performance from Claudio, who plugged holes, started counter-attacks, and held his flank well, be it on the left or right.
Felipe Melo: 7- A tremendous performance from the ball-winning Brazilian. Was in the midst of every midfield event, tackling and winning the ball back frequently.
Aquilani: 5.5- Bit of a let-down after his performances recently. Was slipping all over the pitch, managed to get a bit more into the game when he changed boots, but still a relatively subdued game from Albertino.
Martinez: 6.5- Battled real hard on his flank, playing with personality. Also managed to show flashes of his technical ability. 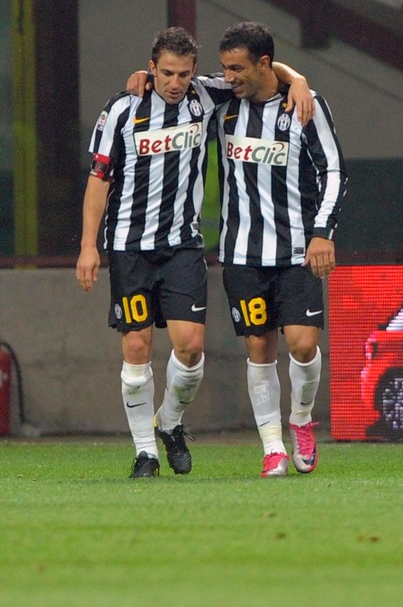 Quagliarella has learned well from Grygera- If I stick to Alex, I can stay at Juve.

Quagliarella: 7- Ran a lot, pressuring Pirlo in midfield and keeping Milan's defense honest. Scored a wonderful header, and also picked out Sissoko with an intelligent cross-field pass for the 2nd goal.
Del Piero: 6.5- Didn't see a whole lot of the ball and sacrificed with Quagliarella by pressuring Milan's midfield, but was effective and intelligent when on the ball.

Delneri: 7.5- A tactical masterpiece. Nothing more to say than that.
Pepe: 5.5- Talk about a tough environment to change positions in. Beaten by Ibrahimovic for Milan's goal, but never should have been marking him in the first place.
Sissoko: 6- ROFL. That is all.
Amauri: s.v.- Brought on to waste-time, so we could launch the ball up to him and the Italo-Brazilian would protect it. Did the job required of him. 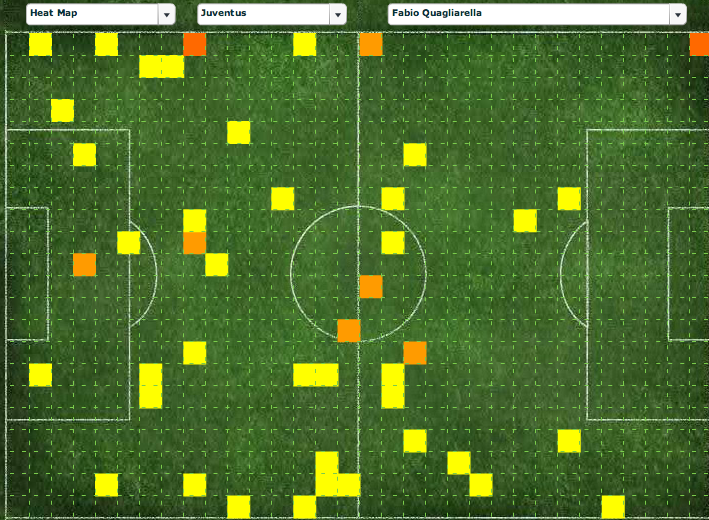 A very hardworking performance from Quagliarella 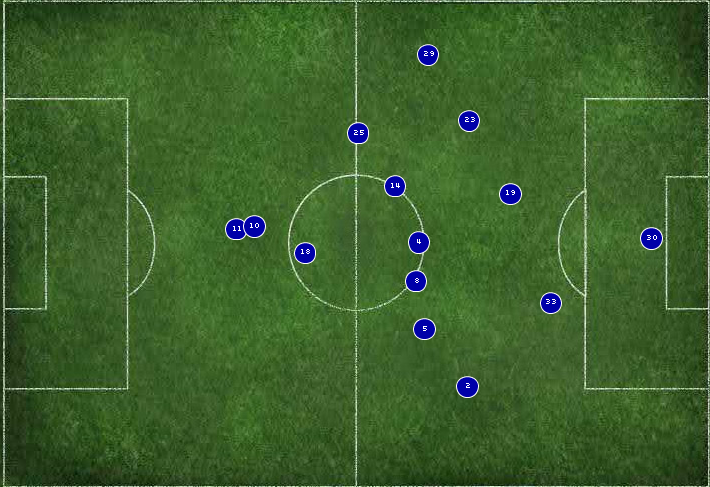 The definition of tactically compact

#1- A Tactical Masterpiece: The team was united, compact, always in position, fighting for the ball, it was brilliant, every coaches dream. As we discussed on the podcast, our team can outrun and outhustle Milan. We bullied them in midfield and acted clinically on the counter-attack. Everyone put in a committed performance, the only underperformers I'd say were Motta and Aquilani.

#2- Legrottaglie's contract must be extended: If you're a long-term reader of this blog, you already knew I'd be saying this. As one who owns not just one, but two Nicola Legrottaglie jerseys (03-04, 09-10), I do love the man. A lot. He may have turned 34, but his experience and leadership are invaluable. Would Rinaudo have walked in and played as well as Nicola? Doubt it. And that was Legrottaglie's first start of the season! He also acts as a great mentor for the team, Motta, De Ceglie, Chiellini have all spoken of the attention he's given them as defenders, and Storari named him as one who welcomed him to Juve and helped him settle in Torino. He needs a year extension, and if he's still working at 35, why not? Even if he's the 4th choice central defender, you'd be hard pressed to find a better one in Italy. Certainly not one with his demeanor, experience, and maturity. 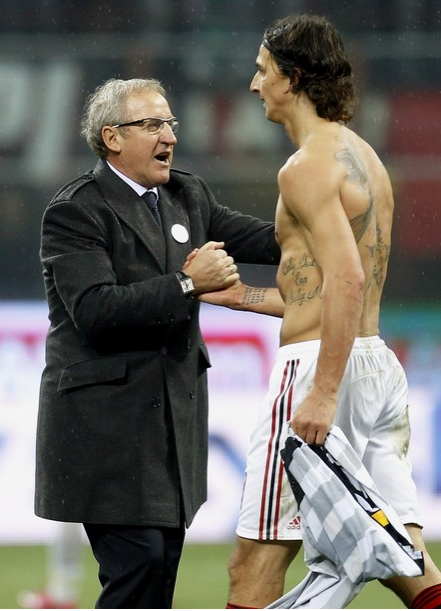 Who gave him their shirt...?

#3- We won without Buffon, Chiellini, or Krasic: It bears repeating. Serious kudos to the entire team who played their hearts out there. More proof that a tactically organized team can easily beat a group of superstars. Imagine this team when we get Krasic, Chiellini, Buffon, Iaquinta, Amauri, Lanzafame, Martinez, De Ceglie, and Traore back.

#4- Injuries are different this year: We've had injury problems, but it seems Agnelli's work did fix whatever the issues at Vinovo were. Buffon and Rinaudo are out with back problems, but most of our current injuries seem to be impact ones. Time for Agnelli to start stocking vitamin/calcium supplements at Vinovo, I think we might have drugstore there.

#5- Del Piero breaks all the records there are: It was just a matter of time though, right?

Gattuso responds by attempting to break his face:

#6- Krasic watch: Totti slapped Oliveira and got a 1-match ban. Gattuso clubbed Del Piero in the face and escaped any punishment. Antonini took a massive dive against Legrottaglie. Felipe Melo went down having hardly been touched by "Milan's Greek guy." FIGC, are you watching? Where are the bans for these?

#8- Team Eats: Uhhhh, a muffaletta and some cheese fries. Not very Milanese, I was in a bar watching the game. There were actually a few Milan fans there, but American football fans are hit or miss. He wanted a yellow card for De Ceglie's tackle on Bonera that resulted in them injured. When I pointed out De Ceglie won the ball fairly before the knee-to-knee contact, he interrupted and literally said "Foul, bro." Cringe. 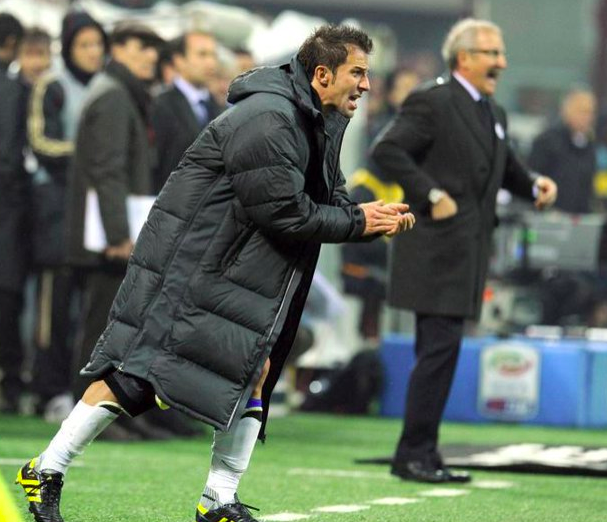