An Interview with Pavel Nedved

Share All sharing options for: An Interview with Pavel Nedved 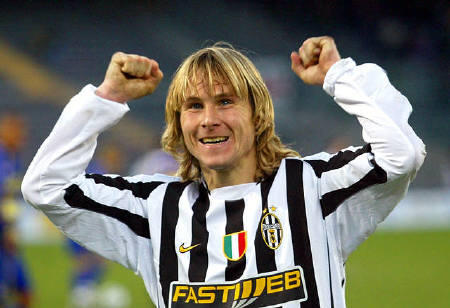 A start. That day, the second part of my life began. I was happy, I enjoyed those moments, and the people around me were crying. It was a strange and magical afternoon.

When and why did you decide to stop?

In 2006, I swore I would return Juve to the top. After the promotion and 3rd place, my head began to not tolerate the training camps anymore. In 2009, we arrived 2nd. To scale the last grade, a very high one, I couldn't be of any help at 37 years of age, we needed someone else. And Juve had a project that I wasn't part of. My agent Raiola tried to make me continue, there were offers from abroad and from Italy, but I didn't see myself in another shirt.

Mourinho wanted you at Inter. Would you tell us about the phone call?

When I heard his voice, I was very surprised. First, he complimented me, and then said "Pavel, I need you to win the Champions." But I refused him immediately, my heart would never allowed me to play for Inter.

What do you miss most about calcio?

The dressing room- the environment, the jokes, the work.

How did your friendship with Andrea Agnelli start?

The first time I saw him on the pitch, he was with his father Umberto, and the image struck me: Juve was an elite club, but also a family. He introduced himself, speaking in English, forgetting that I had been in Italy already for 5 years. I didn't understand a word, and we started to laugh. Andrea and I have many similar characteristics, similar ideals in our vision of calcio, and above all, a common dream that I cannot reveal, but one day will come true.

You're in the Board of Directors for Juve. But what do you do day-to-date?

The nomination surprised and honored me, I couldn't say no to Andrea. My work is to be close to the squad, go to the training sessions, and to keep a dialog going between Delneri, Marotta, Paratici, Pessotto, and to help who needs it.

So will you speak with Buffon?

We saw each other recently, and we'll see each other again soon. I understand his suffering- when you are out of the team for a serious injury, it hurts. Maybe coming to Vinovo would make Gigi suffer a bit more.

Do you already have an office at Juve headquarters?

Not yet. When Andrea isn't there, I take the President's office. It's amazing to divide ones time between the headquarters and the pitch, to understand how to run a team.

Is the work harder of a player or manager?

That of a manager. A player must live like a warrior, eat, run, sleep. Managers have more thoughts to work out.

How is Andrea as a player, who you play with Thursday nights?

Surprising- at the start, I thought that an Agnelli would be a striker, but he plays fullback. He has a similar bad character to me, he gets annoyed if we lose, he runs, he battles. Technically, he defends well, and then attacks. Thursday is a real special night for me, there are Juventini, Toro fans, Interisti, lawyers, workers, managers, engineers, everything. It's beautiful.

What does Calciopoli mean?

A deep emptiness inside, that I struggle to explain with words. I know how much I sweat and how many sacrifices I made to win. Those two Scudetti I feel are mine, and they took them from me.

Is Delneri's Juve ready to win?

We're on the right path. Andrea chose a very competent staff, I see serenity and dedication to work. There's everything to start a winning cycle, at Juve, winning is a normal thing and that must be clear.

Very strong. We have something in common- our style of running, to attack the goal. He crosses very well, now he just needs to learn how to shoot from long distance.

And how is Del Piero?

He's a machine, always in top gear. An example. And I expected he'd continue to play, he has the right head to move forward playing well.\

Ale says he's better than you at golf.

I read the words of that miserable man! He's better than me, but he's been playing longer, I only started at 35 years old. And I'm getting better, thanks to the advice of Dodo Molinari.

Where is your Ballon d'Or?

Uhhh...I think at the bank. They told it to put it there, and not in my trophy cabinet with my other things. I don't really look at my titles, though, I look ahead.

Your biography is called "My Normal Life." Was being normal your real secret?

Yes. My father told me, "You're a man like everyone else, except on Sundays you play calcio for 90 minutes." He was right.

Pavelino, your 10-year old son, is he right-footed or left?

Right, but I'm teaching him to kick with both feet. He plays basketball and calcio, against the wishes of my wife. Near our house there's a gym where I coach him and his friends, we have fun. I spend a lot of time with my family, to recover lost time. My daughter Ivana is 13, and she is very sweet.

Nedved, did you ever get drunk? [What a strange question]

Certainly. At the end of the season, that was one of the first things I did, to clear my head!

What does it mean to you to be considered an example?

I think that's a bit excessive, but it makes me very happy, it's another Ballon d'Or. If my work ethic is an example for children, I'm happy.

Is there something you've done that you never expected to?

Write a book. Right, Michele? [Michele, one of his Thursday night teammates is the co-author and editor of the book, and a great friend of Pavel.] Michele- On Thursdays, Pavel tries not to shoot. One time, he stole the ball in midfield and flew up the pitch, he looked up, but no one was in the box, because they were tired, how on earth can you keep up with him? So he blasted a shot right at the crossbar, his opponents looked at him a little funny, but he grinned and said "I couldn't do anything else..." and then returned to midfield, smiling.