I won't believe any of the transfer market rumors until I see photographic evidence of our players in other teams shirts. 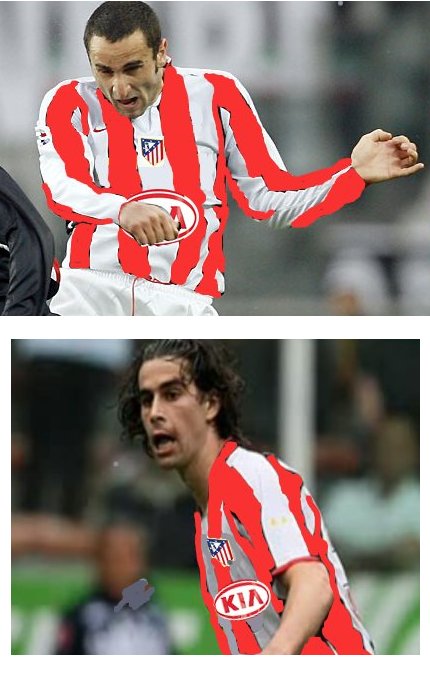 Unless you've been sitting under a rock, you've heard the news. Bettega is back, and he's ready to rock. He's going Moggi-style and kicking people out of the club, whether they want to leave or not. As shown above, Tiago and Molinaro are the heaviest linked to move out, and Atletico Madrid (for which I have a soft spot) is rumored to be bidding to take both on loan. Full thoughts after the jump.

Molinaro- About time. I'm sorry, but I've never particularly liked the guy, and though he got better last season particularly in the defensive department, he's never going to be the caliber fullback we need, and all of you know that. The only defense (ha) I could think for CR28 is that he's young. Oh wait, he's f@cking 26 now! As much as I hate Zebina, I cannot say the same for Molinaro. Sure, I don't like him, but I can't hate someone who gives their best consistently, sometimes they just aren't good enough for the level. If I got signed up for Juve, for example, there's no way in hell I'd be good enough to polish Del Piero's boots. But you bet your ass I'd give it my best shot, and for that reason, I can't hate on Molinaro. Particularly when he wasn't signed to be a starter, remember, he was signed to be Chiellini's reserve in Summer 07, before Giorgio switched to the center.

Two things are a bit curious about Molinaro, though. First, Ferrara made it pretty clear towards the end of the summer he was not happy with the fullbacks we had, so we got Grosso and Caceres. Obviously, that means Ferrara had little faith in Molinaro, so why did he play him when Grosso was given the day off over De Ceglie, who is much younger? PDC has shown significant improvement in my eyes since when he first came back, despite not being given a good run out in the first team. Molinaro is peaked, he probably won't be getting any better, PDC hasn't. The second odd thing is he's been linked with Atletico and Stuttgart. Italians don't go foreign that often, and if they do, it's usually to England because of the money it's the best championship in the world. Everyone's eyes kinda raised when Zaccardo and Barzagli decided to go to Germany, and Maresca/Abbiati nearly got lost entirely in Spain.

A final thought on Molinaro- Rumors in the newspapers have said the fixed price for Atleti could be as low as 3million euros. Rumors about Stuttgart have stated 5.5mil. 3million would be dumber than Molinaro's attempt at a backheel, but given Secco's past work, I can believe it. Molinaro has played moderately well in the Champion's League against players like Robben, he's not too old, he's not cup-tied, and he's pretty experienced. We should aim for at least 7.5million, but of course, we won't.

Tiago- When thinking about Tiago, I said to myself "I still can't make up my mind on him." Then I realized he's been here for 2 and a half seasons. Get the hell out.

Seriously, though. There's something I like about Tiago, maybe he reminds me of my chums from high school, but it's definitely nothing to do with his footballing personality or talent. He's looked good, then utterly mediocre for a month. Does anyone expect him to explode? At the moment, I'd just hope to get frequent "decent" games from him for a bit, but consistency is not his middle name. Two curious things about Tiago, though- First, it seems Juve can't make up its mind on him either. We booted Almiron out of the club after 4 months, and Poulsen was attempted to be offloaded the next summer. For some reason he keeps being confirmed by the club, despite attempts behind-the-scene to kick him out. And then this summer, when I though he'd move on, Ferrara proclaims him a fundamental part of the midfield. The second thing is...he's been here for 2 and a half seasons!

Win-Win- Again, I don't know shit about the Bundesliga, so I cannot say much about whether Molinaro would help Stuttgart. Given their position in the table, maybe so. I can say that both Tiago and Molinaro would probably do well at Atletico, though. Having lived in Madrid and followed Atleti, to which I sort-of-do to the day (cheer for Atleti, not live in Madrid, alas) there are two things wrong with that team. Well, a lot more than that, but two things wrong with the squad. First, the defense makes ours look like Italy at the 1982 World Cup. Luis Perea is awful, and wouldn't be good enough for our Primavera. Pernia, Pablo, and Juanito aren't much better, and Ufjalusi is definitely crappier than he was for Fiorentina. Molinaro would be one of their better defenders, as difficult as it is to believe. The other problem is they don't have a very good central midfielder. Maxi Rodriguez isn't a CM, and Assuncao and Raul Garcia can run a lot and challenge, but not much in the way of passing or playmaking. Without the strong tactics or defensive midfielders of Serie A, I think Tiago could do pretty well in that department.

Essentially, they've had a pretty long run out at Juventus and both haven't really risen to the challenge. Diego, Melo, and Poulsen deserve more chances to prove themselves, but after 2.5 years, eventually you have to make a decision.