Can We Get Some Freaking Prozac Here?

Share All sharing options for: Can We Get Some Freaking Prozac Here?

I feel like a banker the day after Bear Stearns died. Life is absolute shit, and it only looks like it's getting worse. No matter what we do, no matter who plays, we cannot win a goddamn game and it is disgusting. I'll warn you, I'm not censoring my words for this rambling rant of a post so if you have sensitive eyes.....you've been warned. 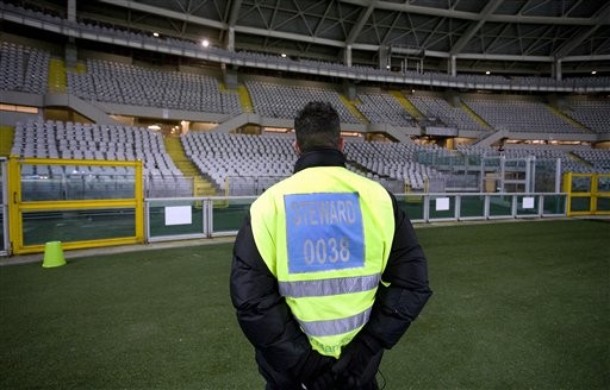 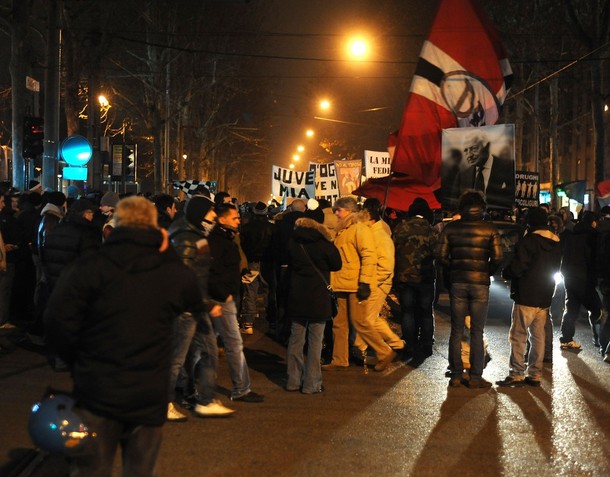 First, as everyone in the peninsula sits and laughs as Juve crumbles, I say fuck them, just as I did when we went out of the Champion's League and just as I said when we were relegated to Serie B. Juve has done more for Calcio and more for the Italian national team than any of those teams (perhaps Milan excluded) can claim to. I wish I was a director at Juve, not only would I be kicking some serious ass upstairs, but I would henceforth ban all Juventus players from playing for the Nazionale. If Juve is shit, you don't deserve to go, and the Azzurri doesn't deserve you either. I'm sure the entire non-Juve population in Italy grinned when Buffon was sent off, well hey fuck you, you don't deserve Buffon in Azzurro either. Enough said. Let's see the Azzurri compete without Buffon, Chiellini, Marchisio, Iaquinta, Grosso, Legrottaglie, or Cannavaro. You think Italy is bad now...

LE PAGELLE:
Buffon: 4.5- I know a lot of you might be mad at me for criticizing him, but that was a Casillas-style, dumb thing to do. If your team is struggling bad, it's a dumbass decision to come flying out unless you know you're going to get the ball. He would have been better off coming to the edge of his box and forcing Riise to take a shot, IMO. Obviously, he was trying to save a goal but not surprisingly, we conceded one anyways. A rare error in judgement.

Grygera: 6- Our best defender of the day. Defended relatively well and put in a couple nice crosses that not surprisingly, no one in the box was able to catch onto. Contained well and offered something up front. Refreshing.
Legrottaglie: 5- Legrottaglie and Chiellini's ratings are the same. For the whole game, they were relatively defensively solid and Roma didn't manage to get very many clear-cut chances or take any shots. Both made a colossal error in being completely caught off-guard for Riise when he charged through and was taken down Buffon, and for that they both get one point off.
Chiellini: 5- Same as above, and his poor clearance led to the first penalty. A rare miss performance.
Grosso: 4.5- Needs to sit on the bench. Offensively, he produces something but it's never a good final ball, and defensively he still leaves giant gaps. Oh, and there's that whole penalty incident. Grosso likes to back up sideways and then stab with his leg, and it didn't go well. Taddei made a hash of it, of course, but there was obviously contact and was no doubt a penalty. 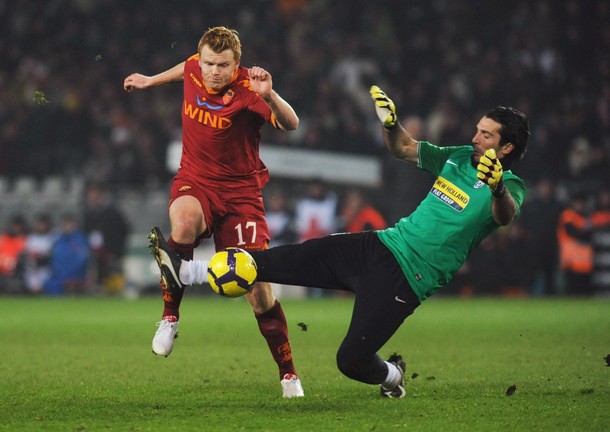 Marchisio: 5.5- Mediocre game tonight, as he had a few chances up top and defended decently. With Sissoko and Salihamidzic, he controlled the midfield for the first half of the game but in the 2nd, lost the battle.
Sissoko: 7- Full of energy, he was endlessly running across the pitch recovering balls, causing pressure, and overall, having a good game. His passing is still garbage, but you know what, at least when he's out there playing, it looks like he gives a damn.
Salihamidzic: 5.5- Not the best attacking display, but for much of the first half Brazzo held his own in midfield, doing well to recover balls and chase down opponents. Like Marchisio, he went missing in the 2nd half.

Diego: 7- Tried and tried, but it's hard when there's no one up top to service. In general, his set piece delivery was excellent though a few corners failed to beat his first man, and looked lively and determined all match. Should have won a penalty on Cassetti who completely missed the ball in a tackle in the box, but like many of the 50-50 decisions tonight, the ref went Roma's way, perhaps he had a new nice Rolex. I don't know why people are criticizing him so much, you could have Zidane in his prime at trequartista, but as long as we have a useless sack of shit like Amauri playing prima punta, you're not going to be that successful. Diego can't do everything himself.

Del Piero: 6.5- Looked very determined, tried his hardest, and attempted to drag his teammates to victory but it wasn't enough. Scored an absolute brilliant goal to open the game...while Totti scored a pretty average penalty. Just saying.
Amauri: 1- I am so sick of seeing him be completely useless and bitch about everything that I was considering giving him a 0, but I'll give him a 1 for actually connecting on a header or two. Like I've said for the last two months- Send him to the goddamn Primavera. Paolucci should have started, he might not be a world-class striker but at least he makes runs or something. 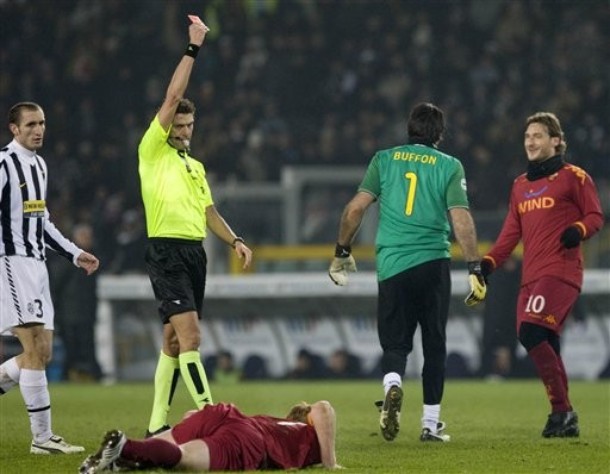 Takeaway points from this game:
-Amauri sucks.
-Grosso sucks.
-Paolucci and De Ceglie can't be much worse, can they?
-See what a regista can do for a team? (Ie- Pizarro)
-Classic Claudio Ranieri, not making one sub. (other than the forced one, of course)
-Poor Spalletti. The first Juve game after his Roma tenure ends is the first time they win one since before he got the job.
-Congrats to Ranieri on getting some revenge. I liked the guy, and he's doing great work in Rome, and he's really eliminated all the Spalletti flaws.
-Did we deserve to lose today? No. Did we deserve to win? No. 1-1 probably would have been a fair result, but that's calcio.
-How much lower can we go? (Do we want to hear the answer?)
-As of tomorrow...we could be as low as 8th place. Genoa, who everyone says is having a poor season, is only 5 points behind us, with a game in hand.
-Juventus.com's homepage- "Luck beats determination." Indeed.

Ciro Ferrara is forced to comment another defeat, which compared to the previous ones showed something different. The Juventus coach in fact commented in this manner: «For what the boys showed on the field, will, determination and temperament, we deserved better».

Unfortunately this was not the case. Asked whether he is sorry with regards to the mistakes by individuals which saw Roma win on a comeback, Ferrara answered: «Apart from the value of the players, when the moment is a difficult one, it is normal that one makes mistakes». He added: «When Buffon was sent-off we weren’t well placed for instance».

After the match, the team remained in the dressing rooms with the coach: «I tried to say a few words to the team in this delicate moment, to evaluate the situation, but nothing more – he stated -. It is a very delicate moment, useless hiding that, a period during which sometimes we deserved to lose, others not, the pity is that we are lagging behind in the table».

Ferrara, however, tried to look at the future, confiding in the team: «This group has strength, character and personality to overcome this moment. It showed this even tonight. They must be strong men and they are». 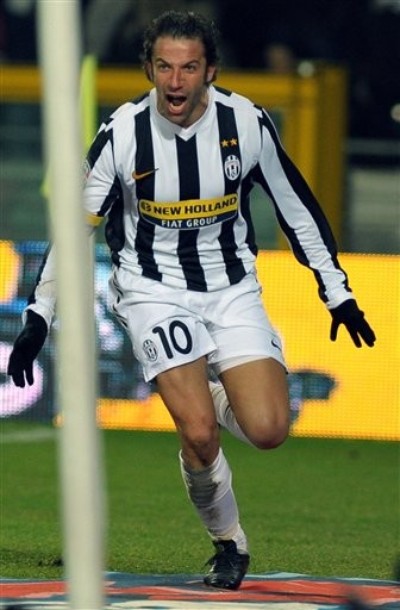 All he's missing is Trezeguet by his side...