Share All sharing options for: Juventus 0-3 Milan; It's All Over

Some have said this is one of our worst games in recent memory, getting hammered by archrivals Milan in our own backyard, our first home loss to the Rossoneri since 03-04. I disagree, while we were utter garbage, the scoreline flatters Milan who were not terribly impressive either. The worst game in recent memory, for me, no doubt was the Bayern debacle where we easily could have lost 7-1, or maybe even worse. That said, it doesn't really diminish the pain of losing to Dinho and co that badly at the Stadio Olimpico. Ratings and commentary after the jump. 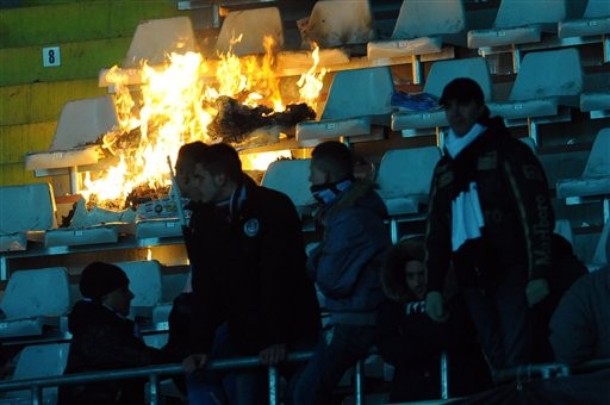 Manninger: 6- Had little to do all game other than pick the ball out of the net. Can't really do anything about the goals.

Grygera: 5.5- His job was to nullify Ronaldinho on the right-flank. Dinho didn't exactly have free movement, but Grygera didn't really close him down either.
Cannavaro: 5.5- Doesn't fill the backline with confidence at all. Should have been marking Dinho for the 3rd goal, but completely lost him.
Chiellini: 7- The only player that can really keep his head high after the game. Defensively, rock solid and on numerous occasions covered Grosso and Cannavaro's ass in what is going to be a very short (or very long, depending how you look at it) World Cup run given the duo's form. Also was one of the few players to look dangerous up top.
Grosso: 5- Leaves massive gaps at the back, which is awful but sometimes acceptable if he's doing something up front. Against Milan he did nothing offensively, and thus only conceded space to Beckham and Co. Grygera and Grosso should have attacked the flanks more, given that Antonini and Abate are still very green, but failed to do so. 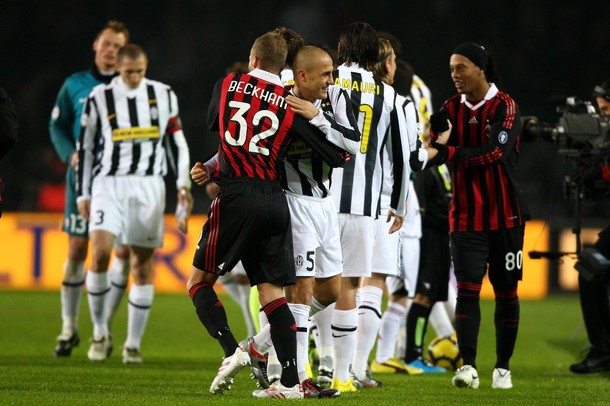 This picture couldn't be more perfect: As Cannamerda and Amauri are fraternizing with their friends (aka, the enemies that just stomped us) Chiellini stands in the back ground, pissed off, with the captain's armband. The only bright spot on our team.

Salihamidzic: 6.5- Another good game from Brazzo. Though he faded in the 2nd half, in the first he was one of the few effective midfielders, playing simple passes and some nice one-twos and doing well to constrain Ronaldinho. Was one of the few to actually build something offensively.
Felipe Melo: 4.5- Yet another garbage game from this year's bidone d'oro. Should have cleared the ball that led to Nesta's first goal, instead, his shittiness left Manninger completely screwed. One has to wonder how poorly he has to play for Ferrara to bench him in favor of Marrone, or hell, Chimenti.
Poulsen: 5- Not as culpable as Melo for the first goal, but could have cleared it too. He fought hard, but with Felipe Melo playing awful, he was alone against a dominant Milan midfield and thus couldn't do much.
Marchisio: 5.5- It is quite apparent that his effectiveness is massively limited playing as a left-midfielder, Genoa game be damned. He did put some decent plays on the wing together, due to the black hole in central midfield, play had to go through the wings. Should have been able to clear the 3rd goal, perhaps the fog from the goddamn stadium burning down obscured the ball. 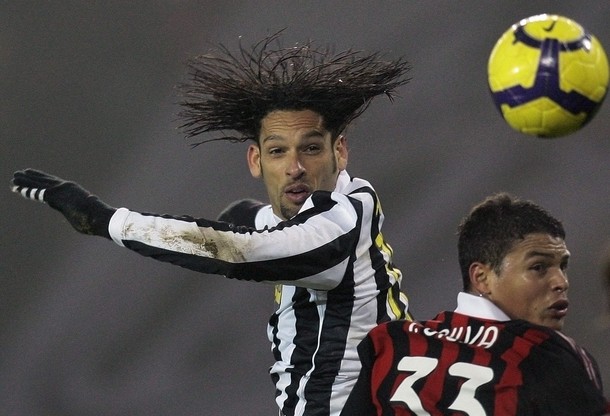 Diego: 6- The lone real outlet for any attacking play, Diego was marked heavily and had no one to pass to. Had a good curling effort on goal.
Amauri: 5- To be fair, he really didn't get any service. I say two things about that: First, when he did get service, he lost possession. Second, he didn't get service because as Diego was dribbling down the field, he was just standing in front of Nesta or Thiago Silva waiting for the ball to be played on him. He needs to make some fucking runs for Diego to pass to.

Del Piero: 5- Another blah performance from il Capitano, though he took a nice free kick late. He's not quite fit, but he needs to play instead of Amauri. Hell, Immobile needs to play instead of Amauri.
De Ceglie: 5- Should have started on the left-wing, and when he came on, Juve had already given up.
Ferrara: 4.5- The game started out pretty well, but the first goal took the wind out of our sails. Two things I blame Ferrara for on this game: First, poor player selection. Marchisio should have started in center midfield over Felipe Melo, De Ceglie should have started at left-mid, and anyone up top except Amauri. Maybe Legrottaglie over Cannavaro, too. Secondly- I don't blame him for Felipe Melo and Cannavaro forgetting how to play within the box, but set piece defending is largely his fault, and it has been non-existent this season. 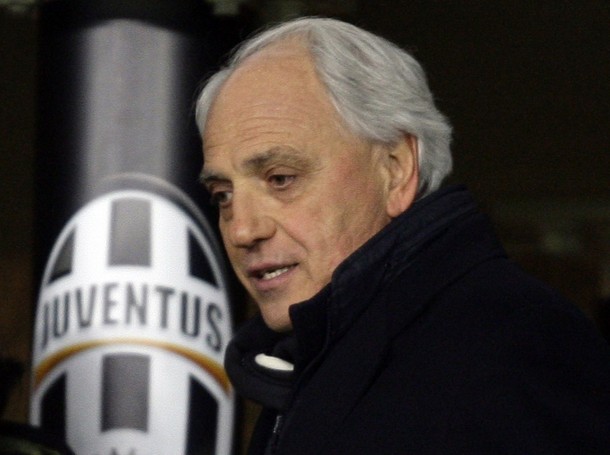 Other Thoughts:
-----So where does this leave us? Do we sack Ferrara, and go for the Guus? I don't think most new coaches will make a big difference, as I said during the game, you can polish a turd all you like, at the end, it's still a pile of crap, and that's how I feel about some of our players right now. It's easier to change coaches than players, but sacking him would just feel like being an Interista. If Gigi Maifredi could coach this team to 7th, why not Ciro? Frankly, if we don't get in the Champion's League, Europa League qualification is pointless, so outside of 4th place, I don't care if we finish 5th or 15th. As I said a few weeks ago, as long as we are top of the table, I'm with Ciro until the summer.
-----Ferrara's shouldered most of the blame over the last month, but even Ferrara's biggest critics seem to be coming around to the idea that the management is very culpable as well. Alessio Secco seemed to have done good work this summer, but it has gone very poorly. Bettega is a step to a competent management that can support our coach, but it will take a while longer.
-----Speaking of transfers, we need to focus less on expensive foreigners, and more on young Serie A talent. Gaetano D'Agostino would have fought for the Juventus shirt, not stood around looking like a dumbass like Felipe Melo does. If we get players that have grown up in Italy, they will know what the Juventus shirt means. Plus, unlike Brazilians or other foreigners, once they are at Juve they are at the top. If Diego became really successful, Real Madrid might swoop for him. Chiellini is unlikely to go abroad no matter who comes calling. Mercato priorities should be some of the following- Criscito, Ranocchia, Bonucci, Cigarini, D'Agostino, and Pazzini. Several of these players are avowed Juventini, for God's sakes.
-----Speaking of Pazzini, we need to go all out for him. Defense should be the priority for this summer's mercato, followed by a good midfielder, but if we have any cash left we need to sign him. He's a Juventino, he's young, and he's a great striker. Iaquinta, for all his hard work, is not a born killer. Trez is, but he's aging. Pazzini is like Inzaghi's predatory nature combined with Crespo's physical stature. (-10 years for both of them, of course)
-----Milan for the Scudetto? I'm certainly pulling for them.

For the masochists out there.

Antonio Paolino's expressions (Juventino on the right) sum it up well. At least I didn't have a screaming Milanista next to me for the match.

That is all. There's a Coppa game against Napoli tomorrow, and I will cry if Felipe Melo AND Amauri set foot on the pitch. We should be throwing youngsters into Serie A matches as long as they keep sucking to say the least..Coppa matches they should be automatically benched for some young talent.