Excuse Me While I Go Puke In The Corner

Share All sharing options for: Excuse Me While I Go Puke In The Corner 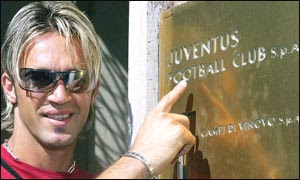 Oh good, he knows how to point.

How the f*ck can you drop two points in stoppage time? You continue to rely on half-retarded pylons (excluding Giorgio) to man your back line. What the hell is Legrottaglie still doing in the Serie A? I have no damn clue. In fact, what's funny about it is, he doesn't either I'm sure. I'm still f*cking fuming. Enter at your own risk, enough with the censoring already.

Jesus that was fucking brutal. It's like someone just riped out my heart and replaced it with some shit wrapped in burning hair in the last dying seconds of this one. We were so damn close then again after a quickly taken kick, our opponents do some damage. Simply put, at times our defense is the biggest piece of shit in the league. They don't know how to play soccer, i'm convinced. In addition there's no fucking emotion from any of them (Chiellini plug your ears). It's like they've all contracted a virus from Tiago rotting tampon from last season. No one shouldn't be worried that only "at times" our guys suck hard. There shouldn't be any fucking "times" at all.

For me I see no above average ability whatsoever back there, and that's stretching it. Absolutely no brains, just slow to react fouling bitches. I kind of saw myself saying I'd miss Cannavaro if injured throughout this season but not this much. Molinaro, Grygera, Legro, they all stink like piss soaked car seats that haven't been aired out for over three months sitting in a New Delhi airport.

"I think that Bologna deserved the draw because they created a number of difficulties for us but even we had the opportunity of scoring a second". Coach Ferrara said after the game. "It is not a good result and we weren't clever because we should have managed to bring the three points home".

"We should have tried to make the opponents run , hitting back. This we did not manage to do and we gave them the chance to attack. We conceded a bit too much on inactive balls and this should never happen".

The draw was not well received: "We took the draw badly. It bothers us because it was our intention to win even though it does not change much in the table. However, I think that in the team we have players who are capable of dealing with victories and even such false steps".

"This is important since on Wednesday we have a very difficult match. Bayern lost this weekend and so did Chelsea and this might mean that the Champions League does have a certain effect".