That game was very different from the game against Roma. Against the Giallorossi, we dominated possession and created plenty of great opportunities for our strikers. This was a much more physical battle with few chances for either side, but an important victory for our Scudetto hopes- the ability to win ugly. Full review after the jump.

Buffon- 7: No miracle saves required like against Bulgaria and Georgia, but he had to be attentive and was fairly busy today.

Caceres- 6.5: His defense was not that impressive, he was megged on more than one occasion and struggled to defend his flank. The Barcelona-loanee improved in the 2nd half and scored a good goal, a goal neither of our strikers seemed to be able to pound in. A dream debut for the fullback, to say the least.
Legrottaglie- 6.5: Cruz gave him a handful and like much of the team, he had difficulties in the first half. Aside from that he looked pretty assured in the back, notably an important block in the penalty box from a low cross with Cruz lurking.
Chiellini- 7.0: A very solid showing, Foggia was lively but Chiellini contained his danger well. Tried to run through Lazio players once or twice, which was a mistake.
Grosso- 6.0: His defending was mediocre, and his offense more so. Molinaro syndrome seemed to spread to him, as he only put one good cross in the whole game, most of them were just blocked by his defender. When crossing, taking a free kick, or a corner, you have got to get it over at least the first guy. I'd rather he sky them alla Oddo than just keep blasting them into the other player. It's his first game in bianconero and I'm sure he'll grow into it.

Camoranesi- 5.5: Perhaps he's still struggling to adapt to his new role, he was pretty absent most of today. He played pretty well for the Azzurri the last two games, and maybe he was tired, but aside from a few good dribbles and one good effort on goal, Camo was "the invisible man."
Marchisio- 6.5: You could tell that he tired in the 2nd half, but he battled hard and well, recovering several balls in midfield and passing the ball well. A good performance, given the circumstances.
Felipe Melo- 7: Another excellent performance shielding the defense, with a few decent forward runs and passes.

Diego- 5.5: Lazio had him locked up well, and maybe it was fortunate his substitution was forced. Didn't seem to be fully fit from the start.

Amauri- 6.5: Powerful up front, he continues to be unfairly penalized by the referee for using his strength. Some good forward headers, he knocked down the ball for Caceres goal and had the effort saved by Muslera that led to the 2nd goal. Nearly scored with a diving header, he hasn't opened his scoring account this season but he's worked hard and played determined. Several times he was running back to help out on defense.
Trezeguet- 6: He's not back, yet. His first start for Juventus in ages, he still looked rusty, although when I saw him go in with a sliding challenge, I knew he was determined. A good volley in the first half, but his first touch and reluctance to shoot were very un-Trezeguet-like. Maybe this goal will help his confidence and bring back Trezegol. It was a delight to see his smile and the way the team was so happy for him when he scored. 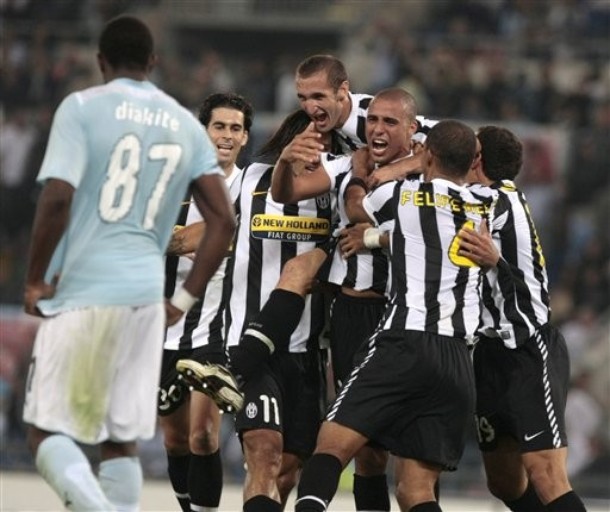 Substitutes:
Giovinco- 6.5: He doesn't have the physical fortitude that Camoranesi, Melo, and Diego have to hold off challenges, and I wonder about his future as a trequartista, maybe he would do better up front. That said, he played well today, but I noticed his best plays were usually when he was out wide. Put in some decent balls to the forwards who were largely service-starved for much of the game.
Tiago- 6.5: Another solid but unspectacular showing. I was a bit surprised Camoranesi started over him given Camo's fitness and the fact he played for Italy just 3 days ago. Tiago improved the midfield when he came on.
Molinaro- s.v.: He's definitely been the biggest loser of Ferrara's arrival, maybe this sub was to make him feel valued by Ferrara. Will he be content to be a reserve after starting the last two seasons? 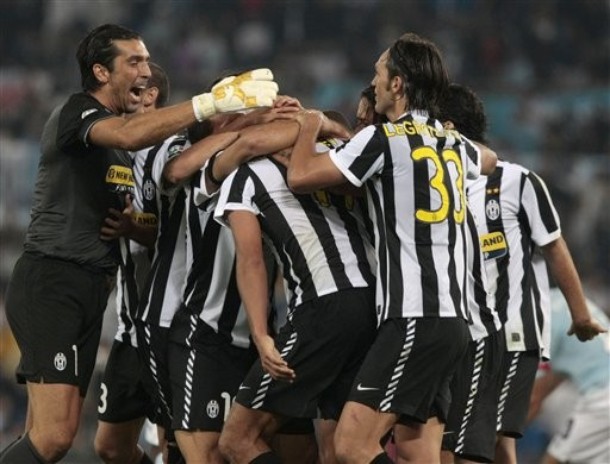 Random thoughts:
Lazio- Ballardini has this team in a good mentality and good physical shape, despite a piecework mercato. Their midfield and defense were full of relative no-namers, but they battled well against our team. If they can keep this up, they will challenge for Europa League qualification.
Ferrara- 5 wins in 5 games for his Serie A career thus far. His substitutions were smart and while the team suffered, it's natural to do so in different games. 5 goals scored and 1 conceded in 2 tricky away games in Rome is a good result.
Julio Cruz- Ha.
I am awesome- I got the prediction right this week, and last week I was 2 minutes from being right. I chalk it all down to luck.
Lazio's disallowed goal- It seemed like a foul from Cruz, but the ref blew the whistle before Mauri shot, so I think it's a non-issue. 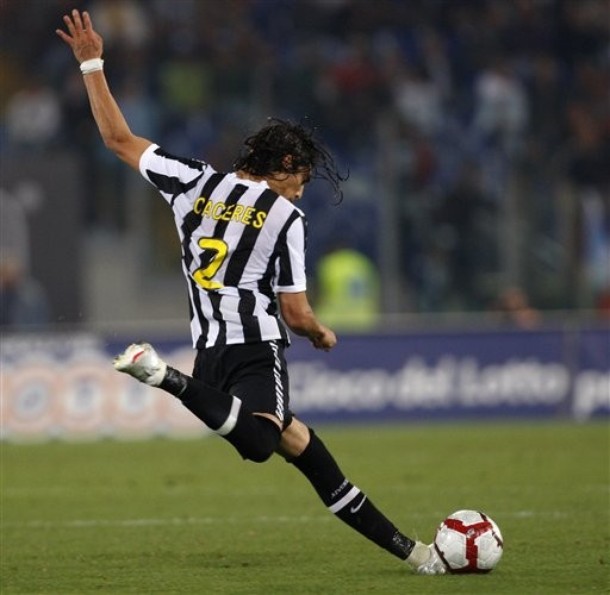 Ciro Ferrara- “First, we dedicate this win to Mike Bongiorno. Winning Rome is not easy, but we've managed to do it twice this season. We knew that there would be problems and that despite the injuries Lazio would make it difficult for us with a very hard work-rate. Admittedly we struggled in the first half in midfield and couldn't keep the ball. [About Diego] “We have to wait for tomorrow's results, but if Diego asked to come off then I think he must have something fairly serious, as he usually wants to stay on at all costs. He felt this twinge when he changed pace and it was limiting him.

[About Rotation] For me everyone in the squad is important. I have a large selection of great professionals and I know not all of them will have played the same over the season, but they will all contribute. I was impressed by Giovinco, [David] Trezeguet who hadn't played yet and Tiago when he came off the bench. We reacted well to that first half. I particularly want to single out [Martin] Caceres, who was effectively making his debut and we thank him for scoring a great goal to give us the lead.

[About Trezeguet] “The goal was very important for him and also the fact he played for 90 minutes with a good level of fitness, being able to come back and help his teammates. Obviously a goal is everything for a striker's confidence and he worked so hard that he deserved this chance. Trezeguet's goal bodes well also for his serenity: it was right to let him play today." [About Marchisio] He is becoming a great player. He works for 90 minutes with both quality and quantity. I hope he continues!”

“Clearly there is a lot of responsibility and I was worried that we weren't the usual Juventus tonight, but I relaxed in the second half when I saw that we managed to win back the ball more often and were more reactive.”

David Trezeguet- «I have not yet reached a definite decision whether to leave Juventus at the end of the season. I must still speak to my family. Even tonight I realized how much everybody loves me and how happy they were with my goal. The goal scored tonight has a great taste. Today for me is a return to great levels. After the injury I worked hard and suffered in order to return and my team mates really helped me a lot. I am drawing close to Sivori? For me it is an honour seeing that Omar was one of my idols.

For now, however, I am interested in re-finding my best condition and continuing to be useful to this team. On Tuesday the Champions League takes off. We showed we are there in the championship and now it is the turn of others to show they are. We are hopeful for this season. The club really did a great deal to make this team more competitive. It is now up to us players to do our part».

Martin Caceres- I dedicate my goal to all the Juventus fans and to my agent Daniel Fonseca, who tomorrow is his birthday. I am extremely happy for this goal, but even more for the victory of our team. At the beginning I was very excited, and a bit nervous, but I managed to overcome it."