The Bianconeri return to Rome

Share All sharing options for: The Bianconeri return to Rome

Back in the Stadio Olimpico di Roma. After the victory against the Giallorossi, our team must be setting up camp in Rome, having some Peronis and Limoncello with the Roman Juventini. We're back this week, to take on the Biancocelesti who are thus far 100% in the Serie A campaign. Lotito has started the sabre rattling early, proclaiming his club as the "model club" for Serie A. If that means limited competitiveness and player-club warfare, he is setting a great example. I don't know why, but I have to admit, i have never harbored any ill will towards Lazio, which is rare given my dislike for clubs of similar statures. (Roma, Fiorentina, Napoli) The exception of course, is the Collina job of 1999-2000, Lazio's most recent Scudetto where we were cheated in Perugia. Anyways, full preview after the jump. 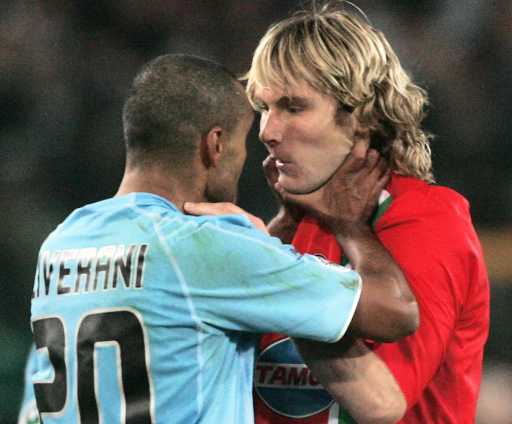 My feelings of indifference towards the Laziali are not shared by all...

RECENT ENCOUNTERS:
Our record against Lazio is fairly mixed since the return to Serie A. The first year, we defeated Lazio comprehensively, 3-2 in Rome following a brilliant Zanetti-ADP display, and then a crushing 5-2 win at home late in the season. Last season in Rome, Manninger conceded an easy goal to Ledesma, before "The Beard" pulled it even with a bullet header off a corner to finish 1-1. The return leg was one we will never forget of course, that, appropriately, of Pavel Nedved's farewell to calcio in which we triumphed 2-0. While our league results have been pretty positive, Lazio outplayed us last season on their way to the Coppa Italia, winning both in Lazio after coming from behind and in Turin. 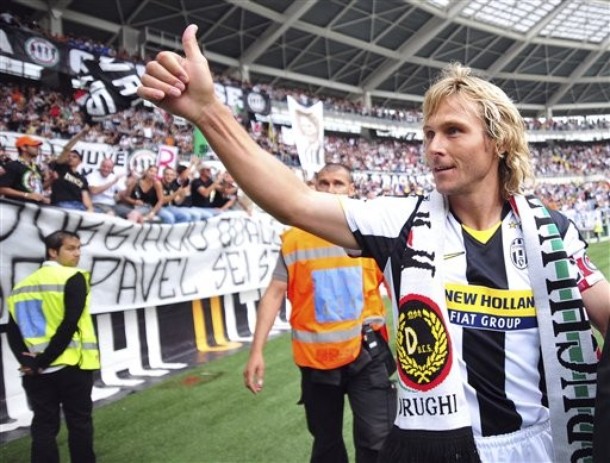 RECENT FORM:
Juventus- (WW)- We've started the season on the right foot. The squad is determined, united, and eager to win. Ferrara has certainly pushed the right mentality onto the team, and with the squad adjusting well to the new tactics, we have played forceful and gritty. Against Chievo we struggled but held our resolve, whereas against Roma we outplayed them in their own home. Let's hope for a combination of the two.
Lazio (WW)- Lazio are another one of the teams thus far 100% in the league, as Ballardini has similarly had a positive effect on his squad. He did well last year with Palermo, giving them more consistency and a big-game spirit, and it seems he's transmitted that to the white-and-blue half of Rome. They defeated Inter in the SuperCoppa, and then edged past Atalanta and defeated a plucky Chievo (as we all know) in Verona. They are in good form as well.

FORMATIONS AND LINEUPS:
Juventus- This is when the season starts to get tricky, with a few injuries as well as fatigue. 7 Juventus players started in the Azzurri win over Bulgaria in Turin, and with the Champion's League starting this week at home against Bordeaux, I would expect several of these players to get rested, namely Iaquinta, Cannavaro, and Camoranesi. Grygera came back from international duty with a slight problem and Del Piero has not been able to resolve his thigh issue quite yet, so left at home are Del Piero, Grygera, Sissoko, Salihamidzic, Zebina, and Sissoko.

In defense, I would expect Legrottaglie to get the nod to partner with Chiellini, giving Cannavaro the rest for the mid-week game. Caceres should certainly debut at right-back as Zebina, Grygera, and Brazzo are all staying home for this game. Left-back is interesting, Grosso played Wednesday but said he's in good condition and ready to start, but he also might be rested for the Champion's League game this week, though Ferrara has indicated he will play. It all depends on how much Ferrara wants to rotate, of course, and here we will get a good look at an important part of coaching; squad rotation. I would prefer Grosso to be rested, a lineup of Caceres-Legro-Chiellini-De Ceglie, which is our 2nd-string defense (except for Chiellini) and I feel pretty good about it. That's a new feeling.

Midfield is a guessing game as always. Tiago, Camoranesi, Marchisio, Poulsen, and Felipe Melo all played international games a few days ago, so no player is "fully rested." The good news about Felipe Melo's international game is that he will receive a length ban I would imagine, for kicking a Chilean player in the crotch, so less exhausting Europe->South America travel for him.

In attack, Iaquinta is widely expected to be rotated out, and with Del Piero absent, one would expect Trezeguet to return to the squad, and hopefully bang in a goal. That would do wonders for his confidence. Diego should return as trequartista as he was not called up by Brazil, though Giovinco could get a surprise appearance up alongside Amauri or maybe slot in for Diego. 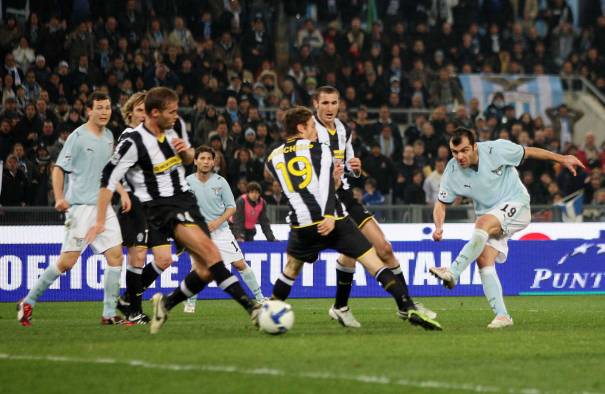 Lazio- Zarate and Rocchi are fighting to be fit for the match, whether either of them will be is anyones guess. Inzaghi Jr, Stephen Makinwa, Siviglia, Brocchi, and Cribari are all definitively out of the match. Ballardini will probably go with his preferred 4-3-1-2 with Brazilian midfielder Matuzalem as trequarista and Juve-killer Julio Cruz up top. (God, I wish he retired) For better information, check out Cathal and Franco at the Lazio Offside, they do good work.

KEY PLAYERS:
Diego- Duh. This kid has taken to calcio like he's been here for 5 seasons. What has impressed me a lot about Diego is his excellent tactics and his willingness to chase down the ball when the other team has possession, in general, sacrificing for the team. It shows despite playing in the most arrogant position, he is humble and a team player.
Cruz- I need not explain why.

KEY BATTLES:
Ballardini v. Ferrara- Push- Both are young Italian coaches who impress both with their tactics as well as motivational skills. Both are very good coaches.
Cruz v. Bianconeri- Bianconeri: He has a fetish for scoring against us, as does Rocchi, but I'm confident we can keep them quiet. 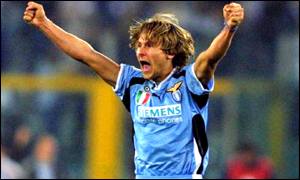 «We will be playing against a team which has the same amount of points as us and which immediately achieved important results, especially in the Super Cup. I know they have some problems with the line-up and that Rocchi and Zarate might not be available but Cruz will be there for sure and he is a player who often caused harm to Juventus having scored even against me. In any case, I hope to find the best Lazio opposing us. We have a delicate and difficult match ahead of us against a team which will create various difficulties. We are returning to Rome immediately, but we have already forgotten about the victory we had a fortnight ago even though we want to win again and continue down the same road».

[Regarding international players] «They all got back safe and sound even from a psychological point of view thanks to the many victories obtained. Only Grygera suffered a blow which must be evaluated. Caceres returned today whilst Felipe Melo will join us in Rome but there are no problems with him. The same applies to Grosso who immediately fit in well. I think there will be some changes with regards to the last match also due to Tuesday’s Champions League match».

[About fatigue and rotation] «With so many matches to be played it will be harder to recuperate the physical and mental energies and we will have to manage our strengths. We knew this and this is why we wanted to build an ample team. I will have to rely on everyone».

Other previews and prediction: 2-0 to the Bianconeri. I think we're going to hold this one, a refreshing change from the past two years where we returned from international breaks horrendously.
Lazio Offside
Football-Italia
Football Italiano
Goal.com (EN)

LAST WORD: This man is insane.