Wow, that was everything I had hoped for. Class performance from our boys today, we dominated possession and took the game by the scruff of the neck. If you haven't yet checked out the photos Roberto posted, check them out here.

Buffon- 7.5: While he probably could have been a bit more attentive on Roma's sleezy cheap goal, he more than made up for it with that brilliant save on Totti. A goal at the end of the half for Roma very well could have changed the game. How a man as big as him has the reflexes he does is confounding, he defies the laws of physics.

Grygera- 8: His offensive contribution was mixed, and he started the game a bit slowly, however Zdenek made some terrific challenges and looked defensively sharp throughout the rest of the game. If he can get some consistency, I see no reason why we need to dump him.
Cannavaro- 8: I'll try and refrain from anti-Cannavaro comments, but you all know my position on him and nothing will change it. He got roasted once by Menez, but made great blocks, tackles, and generally looked defensively untroubled.
Chiellini- 8: An absolute monster in the air, the Cannavaro-Chiellini partnership is starting to gel so it seems. Equally capable when switched back to left-back.
De Ceglie- 7: The worst of the defenders but there is absolutely no shame in that tonight. Defensively he looked quite good to me most of the game, and offensively he worked hard. His crosses started Molinaro-esque but they improved. Ferrara obviously believes in him and with a solid run-out in the team, he will be our new starter.

Marchisio- 6: Still hasn't really found his form this season, though he played better last week against Chievo. Roamed the midfield and caused plenty of pressure but didn't really do anything that stood out in my mind. Unfortunate to go off with an injury that will likely cost him some Azzurri caps over the next two weeks.
Tiago- 7: To quote Datasport, "every game he looks more like the player Juventus thought they had bought 3 years ago." Goddamn it took a long time, but it seems Tiago is finding his position in the team. He was smart with possession and determined without. His performance was good today, but not brilliant.
Felipe Melo-8: Maybe he'll win me over after all...and then probably head out to Real Madrid the next day. He started out pretty poorly and conceded that led to De Rossi's goal, but was brilliant for the rest of the game, someone needs to take a video of his performance today and show it to Sissoko. He sat deep in midfield and broke up plays excellently and covered defensively for the fullbacks when they ventured forward. Scored a great goal at the end to cap off a great debut. A good game, but to quote Yule Brenner, "This doesn't mean I like you."

Diego- 9: One word, genius. This kid is destined for some great things, as Datasport put it, it looks like he's been playing at Juve for 10 years. There has been almost no problems with him, he has adjusted instantly to Serie A and much of the credit has to go to Ferrara for building the team around him. Two great goals and created plenty of opportunities. Just as Sissoko can learn from Melo's performance today, so too can Giovinco. Diego's first goal made me wonder if Giovinco would have had the physical strength to hold off Riise. The Zidane comparisons are premature, but one thing that reminded me of Zizou was the fact that Diego isn't that fast on the counter...not that there's anything wrong with that.

Iaquinta- 7: As usual, ran his heart out for the team and was a bit unlucky to not score. This man bleeds bianconero.
Amauri- 7: While not quite as good as last week, Amauri was very threatening today and won his duel with Mexes, though he was desperately unlucky to not get his name on the scoresheet. The referee unfairly called him back a number of times because of his size, a clash, the Roma player drops to the ground, whistle went against him, lame. A presence in the air.

Subs-
Camoranesi- 6: Camo didn't do it for me today, he looked to be in decent form but didn't seem to find his place in the 3-man midfield.
Poulsen- 5.5: Ran around and carried the ball but didn't do much. C. Zanetti had a class game for Fiorentina...too bad we don't have him to come off the bench.
Legrottaglie- 7: Came on, read the plays well and had Totti locked up in the air. Can't ask for anything more.

Random thoughts about the game-
Ferrara: Goddamn I love him. Great team selection and the tactics were great, as Juve owned most of the possession. Under Ranieri there were several changes we were all crying out for, ie- Given the strength of our CBs, why not occasionally move Chiellini to LB and play Stendardo-Legro in the center? I grinned when he did that today. It hardly could have gone better today, and a lot of credit needs to go to Ferrara.
Roma: Julio Sergio, really? What the hell man, look out Doni. And that was a classy goal, and by classy, I mean scuzzy like scoring when a player is down injured. Cassetti is and always has been rubbish. Menez has a lot of maturing to do. De Rossi was pretty crappy today, especially given his primary job was to stop Diego. He did not do that. Cerci has a bright future. Who needs 2 Roma-born-and-bred players when you have 2 Torinese on the pitch? Roma started with 4 Italians, we had 7. (8 if you consider Diego/Amauri to be half Italian)
Del Piero v. Totti: Some Romanistas have laughingly suggested that Totti is vastly superior to ADP. You can do all the backheels you want, but match-winning goals are a bit more important. Totti hasn't had any against us the last 3 years. ADP had had 2.
Rocchi: Good god, the first half he was whipping out that yellow card like he was Chinese. (Sorry, had to put that in there. What does that mean, anyways?) Then the 2nd he wasn't. A pretty good refereeing performance but too often he whistled for fouls that he shouldn't have.
Inter: The Scudetto race is officially on. 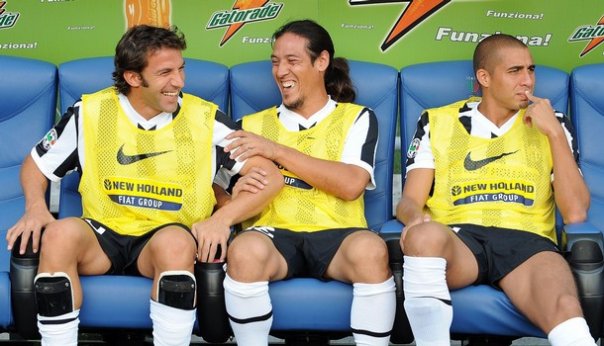 When this is on your bench...your team is in good shape.