SECCO, I HOPE YOU BURN IN HELL

Share All sharing options for: SECCO, I HOPE YOU BURN IN HELL

Honestly, I'm so infuriated that I can't even post anything coherent. But this more or less explains it for me. 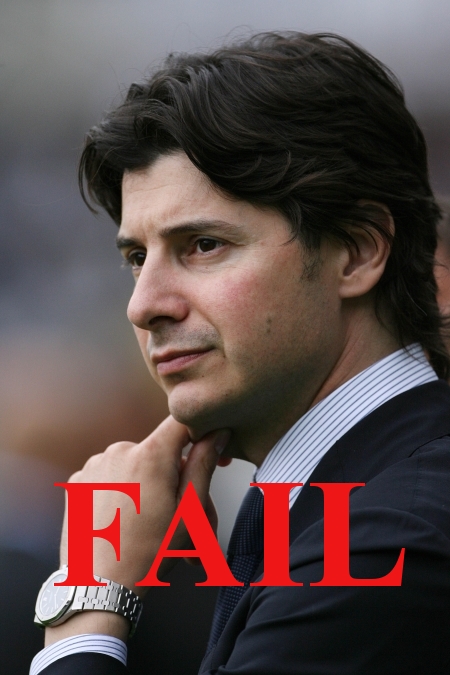 It doesn’t make sense. It just doesn’t. Why have Juventus, on the eve of a season when they do seem to be competitive enough to fight Inter for Lo Scudetto, sold Cristiano Zanetti to Fiorentina?

Granted, it’s not the biggest transfer shock of a summer which has seen Kaka, Cristiano Ronaldo and Zlatan Ibrahimovic move for ludicrous amounts of money, but Zanetti’s £1.5m switch to Tuscany is, in its own way, a major surprise. More than that, it could turn out to be a potentially costly own goal by the Bianconeri officials who had spent most of July and August repairing the damage caused by their calcio mercato deficiencies over the past 36 months.

Granted, he did have less than a year left on his contract in Turin, but he was sold for such a measly figure that finances shouldn’t have been the deciding factor. And even if Zanetti left at his own request, surely Juve could have convinced him to offer his services for just another 12 months? It’ll be up to the major players in the move [Zanetti himself and Juve sporting director Alessio Secco] to answers those questions, but the fact remains that La Signora are now missing a potentially vital element in their ranks. Although Zanetti’s fragile muscles mean that he isn’t physically up to the challenge of a whole season uninterrupted, he was unique to the Old Lady.

(IMFUCKINGPORTANT) Zanetti was not just an ordinary midfielder for the Italian giants, he was their only playmaker, the man in their ranks who could organise and dictate the tempo of the whole side. The only deep-lying central midfielder with true vision and one of only a few in the squad who can pass a ball accurately over 40 metres. His departure is all the more noteworthy given that Juventus opted against signing the more creative Gaetano D’Agostino recently by spending £20m plus on the Viola’s Felipe Melo. Possibly because they already had Zanetti at their disposal. Perhaps Martin Caceres, despite the assurances of Secco last week, won’t be the club’s last summer buy after all…

Non-coherent angry ramblings:
#1- Goodbye Scudetto. No, I'm not overreacting, I'm serious. We're going to be battling for 3rd/4th place, at best. Everyone is excited about our mercato, but our defense is still garbage, and now our midfield is lacking any kind of fluidity.
#2- Sissoko isn't going to be playing until October. Then he's gone for a month+ for the African Cup of Nations. Oh, he also fasts during Ramadan.
#3- Who is going to be passing the ball in midfield?!
#4- What the fuck is with undervaluing players? Has Secco ever heard of trying to squeeze money out of sales, Mellberg, Marchionni, and Zanetti sold for collectively 9million euros. Are you KIDDING ME.
#5- Why are pieces of shit like Tiago, Zebina, Almiron, Poulsen, etc still on the team when we sold 3 decent players? You're supposed to shed the shitty parts, not the quality reserves.
#6- Secco is back on my shitlist. Also, Corvino shits on Secco.
#7- New mercato- Sell off the Italians, sign foreigners. Or traitors. At this rate, we will be Inter in 5 years. (maybe faster if we can force Del Piero, Buffon, and Legro into retirement)
#8- To Fiorentina, really? Why don't we sell Camoranesi to Inter, I think he would feel home with all the Argies there as well and Inter could really use a trequartista.
#9- New tactics- Prepare for long-ball from the defense, hopefully to Amauri's chest or Diego's feet.
#10- I need a drink.

Apologies for the swearing, but good Lord I have no idea what Secco is doing.