So this is the week when the teams start to resolve co-ownership or exercise contractual options, or else it goes to the envelopes, in which case we hire Moggi as a consultant for the week. Deals resolved thus far this week after the jump. 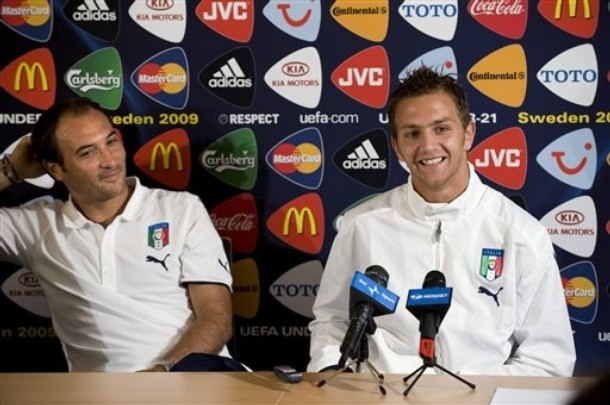 GENOA - Genoa Cricket and Football Club announces it has exercised, according to their jurisdictional rights, the option of acquiring rights from the teams Juventus Football Club and Us Città di Palermo for the players Domenico Criscito and Bosko Jankovic

Disappointing Criscito won't be with us next season, but Secco made a decent deal here. To get co-ownership, he set a pretty high price of 7.5million euros, so Genoa payed a premium for him. It was obvious that we weren't that interested in him and that he wanted to stay in Genoa, so we get a nice chunk of cash and retain half of his rights. Hope you succeed in Europe next year, and hope to see you back in Turin someday Domenico. (Side note- Mimmo is getting married July 7th, congrats)

Raffaele Palladino- This one was obvious. Our frontline is crammed, and we're not playing with wingers next season, hence, no room for Palla. Despite a low goal return, partially due to playing wide, Raffaele has done well with Genoa and the two teams agreed to renew his co-ownership for the next season.

Davide Lanzafame- Similar situation to Palladino, in that there's no space for him at Juve, so Palermo and Juventus have agreed to renew the co-ownership terms for the following season. I hope Palermo gives him a run-out, though I'm not holding my breath, because the kid has some real talent. Maybe we should loan him out to Bari again, now that they are in Serie A.

Andrè Cuneaz- Who, you might say? A young midfielder from the Valle d'Aosta who we signed from a local team two years ago, his co-ownership has been renewed with Mantova of Serie B.

Another two youngsters raised in the Juventus youth sector will not be returning to base. These are goalkeeper Andrea Pozzato who will remain at Canavese after having renewed his contract up to 2012 and midfielder Matteo Cavagna who was transferred to Ravenna permanently.