The Official Biography of Diego

Share All sharing options for: The Official Biography of Diego 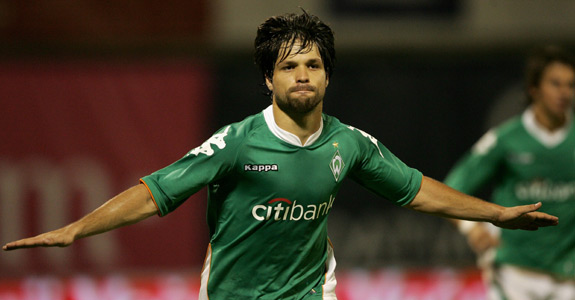 First of all my heart goes out to those of you who've been waiting awhile for this piece. Truth be told, every time I started it I got carried away watching You Tube videos of him from adoring Werder Bremen fans with everything from Tina Turner to Autobahn inspired trance soundtracks. Their admiration for this guy is truly something to behold. Finally though following alongside the post on our mercato arrivals, we now present the first official biographical post on our newest signing, Diego Ribas da Cunha.

Born on the 28th of February 1985 in Sao Paolo, the Brazilian began his career at Comercial FC Ribeirao Preto at age 5. He then moved to Paulistinha Sao Carlos before he joined FC Santos, a popular domestic outfit and the hometown club of Pele, in 1996 at the ripe age of 12. He made his first team debut four years later, and by 18 years old he wore the captain's armband guiding his side to two Brazilian titles in 2002 and 2004. Pele later described the teenage sensation as a "worthy successor".

Taking a jump across the pond in search of something more, Diego joined the popular Portuguese side FC Porto in 2004 for € 8 million as a replacement for the Barcelona-bound Deco. Cue the speed bump. Reports suggest the then Porto coach, Co Adriaanse, was unhappy with the defensive effort of his midfielder which eventually led Diego to lose his regular first-team place. After two years of the on again off again routine, Porto sold him to Germany's Werder Bremen in May 2006 for only € 6 million. Talk about good career moves.

While playing in the Bundesliga under the keen eye of long time Werder Bremen player and now coach Thomas Schaaf, Diego's potential was finally being tapped by employing him in an attacking-minded formation. Schaaf decided to give the playmaker as much of a creative role as he could handle, and the young Brazilian responded in kind. For three seasons he led the northern German side to new heights domestically and internationally including a German League Cup title, a German Cup title, and two praiseworthy runner-up performances in both the UEFA Cup and Bundesliga competitions. Bayern Munich President and German football legend, Franz Beckenbauer recently praised him as "a player who can make the crucial difference". 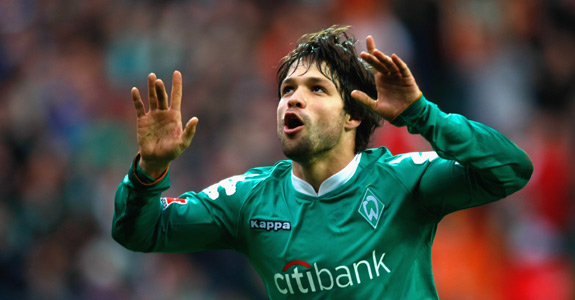 In the last two seasons our Old Lady has had her fair share of memorable performances, some worth mentioning more than others. The "others" in this case were those tormenting instances when our attack couldn't muster enough creativity through the middle when we desperately needed to. In fact, during Ranieri's tenure we were practically toothless in that respect. Now with the addition of Diego, our side can finally boast about a "crucial difference" in our opponent's final third again.

What excites me about him as a player is his hunger for the ball and his physical presence while on it. From the dozen or so Werder Bremen games I've watched, ever since rumours of Juventus' interest in him began two years ago, he consistently displayed a unique attacking talent for the game. While employing the same flair and technique one would expect from an attacking midfielder born in Brazil, Diego exhibits an unusually large sense of strength and determination most of his countrymen typically don't share.

As a result, adjusting to Italian football shouldn't be a problem (ahem, Tiago), especially after Ferrara's already confirmed we'll be employing a system similar to the one Diego enjoyed in Germany. "Diego will be accommodated with a different system to the one used in the last two years, but it would be wrong to build a team around him. He is a great champion, but the individual must be at Juve's disposal. After all, if Diego is missing then we cannot be without a Plan B. It will be a 4-3-1-2 system, but that can be changed to 4-3-2-1 or 4-2-3-1 depending on the circumstances. With the characteristics of the players we have right now, I'd say 4-3-1-2 is the best solution."

With so many talented youngsters ready to make their impressions with Juventus on the highest of stages, the future of our club has never looked brighter. Next season we'll be ushering in a new era of football, one year before the completion of the Delle Alpi re-construction. Therefore along with a brand new stadium all of Europe can envy, we'll have a style of play that'll be sought after just the same.