Internationals: Where are our Juventini?

Share All sharing options for: Internationals: Where are our Juventini?

A brief resume of the goings-on of our various international players. 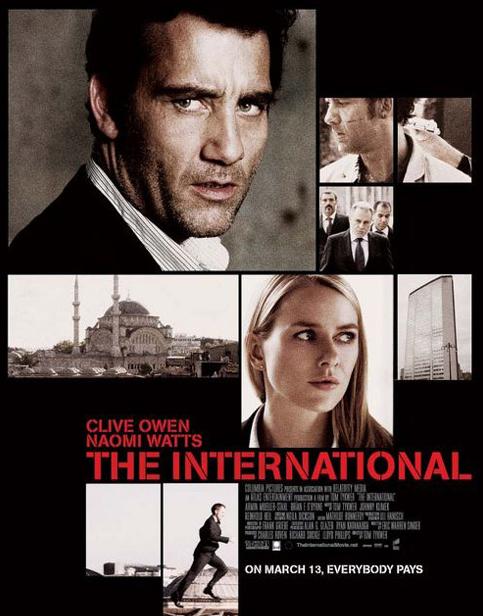 Sure it's already over for the summer, but I'll recap some of our player's national sides.

Italy: I won't go one-by-one since you all are probably familiar, but Italy is looking good to make it to South Africa, again. In one horribly large run-on sentence: Buffon is still god, Chiellini is officially a starter, Cannavaro is still average, Legrottaglie is on the bench, Camoranesi called up when not injured, Iaquinta is pushing for a starting role, Del Piero is plotting to sink Lippi's boat, Marchisio, Giovinco, and De Ceglie have been left to the U-21 Euros, and Amauri is still sitting around watching the mailbox for his passport. 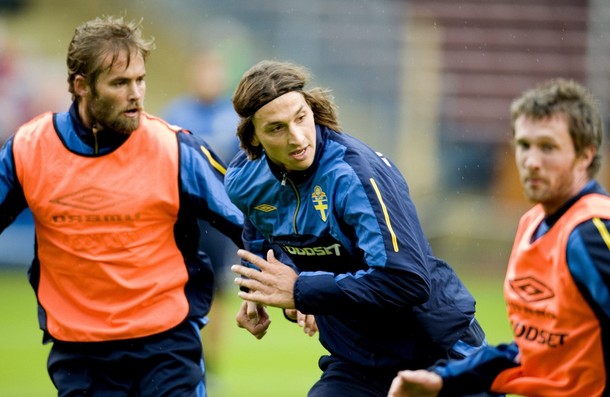 Sweden: (Note: Sweden needs a blogger.) It's not going well for Olof Mellberg and co, who are tied with CRTBA (shamelessly ripped from Chris) and Portugal at 9 points, 4 behind the playoff spot and 7 behind group leaders Denmark. Mellberg has been starting every game, and with 2 goals conceded in 5 games, it appears their problems aren't in defense as much as their anemic offense, which before the Malta 4-0 drubbing, had failed to score in 3 out of 4 of the qualifying games. Sounds like some big Swede is choking...
Portugal: In the same group as Poulsen and Mellberg, Tiago earned a recall to the national team after several years, coming off some good performances for Juventus. He played in the friendly drubbing against Brazil, and then in the qualifying match against Sweden where he had an average and unremarkable game before being subbed at 62 minutes. Even if Portugal makes it to South Africa, don't expect Tiago to be part of the team. 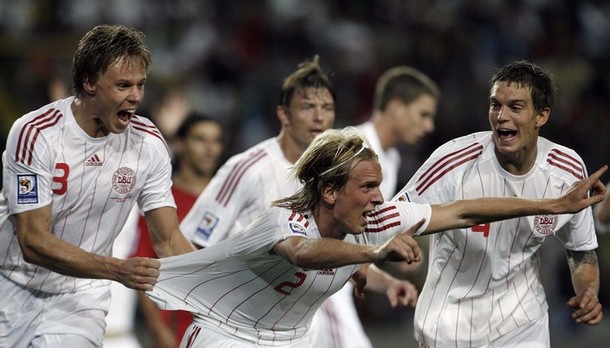 Denmark: On the other hand, it is going wonderfully for Christian Poulsen and his fellow Danes in their group. With Portugal and Sweden, few expected Denmark to make it to the World Cup but they sit 3 points above 2nd-placed Hungary. Poulsen has started every qualifying game, and the Danes have been winning impressively: In 6 games, 5 clean sheets, and 13 goals scored. Poulsen has grabbed two of those, 1 against Albania and a crucial late 89th minute goal against Portugal that tied the game before Jensen scored a stoppage-time goal to win it 3-2 for Denmark and put them solidly in place for qualifying. Why can't Poulsen bring his Denmark form to Juve!
France: For the first time in God knows how long, we have no players in the French national team. Seriously, I can't think of the last time this was true, probably pre-1996.
Czech Republic: Grygera has been starting most games, though qualifying is not going smoothly. The team is in 4th, 2 points behind Poland. The team has been doing mediocre, with a relatively impotent offense and a defense that has been letting them through in big games. (2 against Poland, 2 against Slovakia) Qualification looks like it's going to be a tough one, which is sad for a team that has some great talent. Maybe a certain Czech Fury could help.
Austria:(Also needs a new blogger) Austria is in 4th place, tied with Romania, and like the Czechs and Swedes, a very longshot from making it to South Africa. Manninger has been starting most games, and the team has allowed 9 in 6 games, though by all remarks Manninger is playing quite well.
Bosnia and Herzegovina: Alright, Brazzo retired from the team but I was stunned to look up that they are in 2nd behind Spain, ahead of Turkey and Belgium. 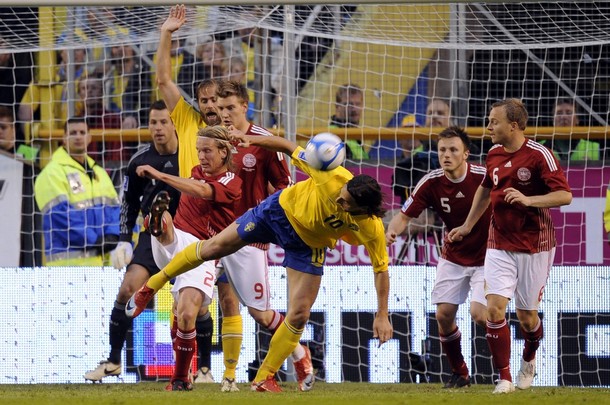 Mali: Mali's world-cup qualifying doubles as qualification to the 2010 African Cup of Nations, so in each group of 4, the top team goes to South Africa, and the top 3 go to the African Cup. Mali is in 4th after two games played, with 1 point. There's plenty of games left, but obviously a poor start for Sissoko and co. Sissoko played in one of the games, the other he was out with injury, and played well. Other notables playing for Mali are Kanoute of Sevilla, and recent-treble winner Seydou Keita of Barcelona, who is Sissoko's cousin.
Brazil: In Conmebol's crazy free-for-all, every-one-in-one-group qualification, Brazil sits at the top, though it hasn't been entirely smooth with goalless draws and a loss to Paraguay. Diego has been not called up, sat on the bench, missed out on the bench, and has started. Maybe a Brazil fan can enlighten me on what that means. 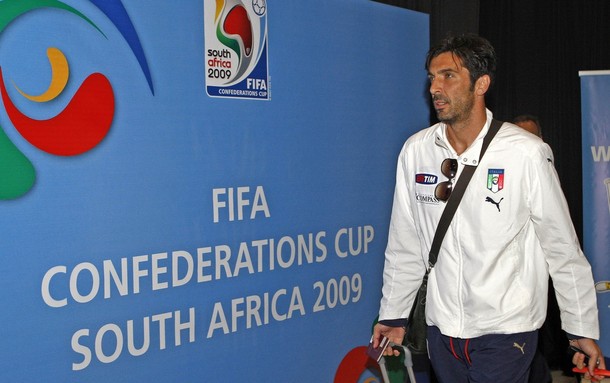 Confederation's Cup:
Brazil: I think we can officially declare that Dunga doesn't have a problem with Amauri, he has a problem with Juventus, which would make sense given his Viola past. Maybe it's because we've never really had a large jungle-contingent unlike our less-illustrious compatriots Inter, Milan, Roma, etc, and instead preferred to develop Italian talent. Amauri has cooled off, which is a great reason for Dunga to ignore him in favor of superstars like Luis Fabiano (a total of 8 goals this season, in a goal-happy league) and Nilmar, who is an international scrub still. But now he's ignored Diego who has picked up an impressive 33 caps (at age 24) having debuted for the Selecao at age 18. Unless Diego's injured, I don't see why he'd call up flops like Julio Baptista instead. Sure, Bremen was disappointing in the league but Diego was crucial in their two very strong cup runs, in the Uefa Cup and the German Cup. We're happy to keep our two Italian-Brazilians at home anyways.

USA:
Giuseppe Rossi (Yes I know he's not a Juventino, but I couldn't resist) 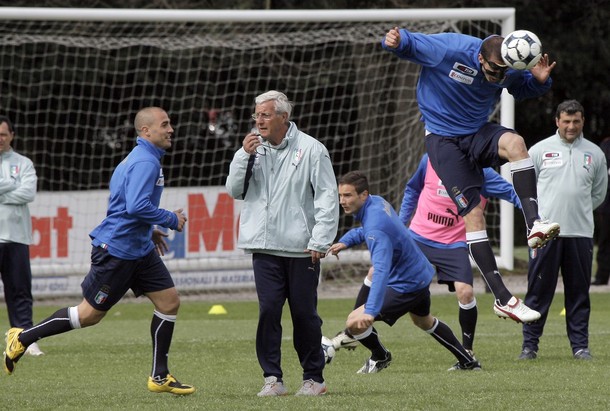 Italy: Let me take this moment to point out Juventus has 6, yes, 6 Italian internationals deservedly going to the Confederation's Cup. Milan has 3, and Roma and Inter both have 1, two less than Fiorentina, and the same amount as teams like Sampdoria, Udinese, and Napoli. Viola fans, nice work. Everyone else, play some more quality Italians.

Gianluigi Buffon- He's superman. 'Nuff said.
Giorgio Chiellini- The future captain of Italy and Juventus, Chiellini will put some much needed pace, grit, and steel into a iffy backline.
Nicola Legrottaglie- Deservedly called up to his first international tournament, capping a wonderful return to form over the last two years. He'll probably get some playing time, though I would expect him to play second fiddle to Cannavaro, reports today suggest Lippi may keep the Legro-Chiellini partnership intact. Wonderful if true, but Fabio's gotta have small injuries for that to happen. Stupid as it may be, as long as he's Italy's captain, he will be playing. Edit: Indeed, he has a right-calf problem.
Fabio Cannamerda- It'd be nice if Chiellini could do the Nazionale and Juventus a big favor and repeat last summer's heroics.
Mauro Camoranesi- Is Mauro in shape? Yes. Is Mauro healthy? Yes. Then he'll likely play. Can he remain healthy for two weeks? That's the question, Jimmy.
Vincenzo Iaquinta- Without a doubt the most in-form striker in Italy at the moment, Iaquinta saved our skin the other night, after a Gilardino brace, he completed one of his own to help Italy to defeat the mighty New Zealanders, 4-3. In January his place at this tournament wasn't assured, much less his spot at Juventus. In March, it looked like he'd play like he did in Germany, from the bench. Now, I think Lippi has to give him a starting shirt. 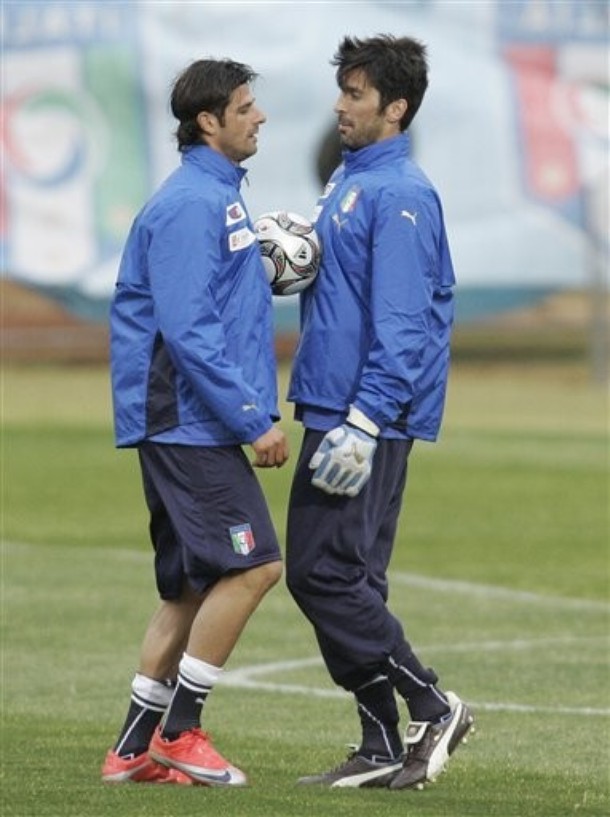