Ask any competitive athlete in any discipline what they think of second place, and they'll tell you it's kind of like being the first loser. This Sunday is our last game of the season and coincidentally our last chance at some form of self-redemption this year. However, what's more important is that it's Pavel Nedved's last game of his career with the bianconeri.

Answers to questions about whether or not Juventus could have done better this season given the cards they were dealt with, will be left for another post in the future. For now, we speak about a man who's work ethic should never be speculated upon.

Since his birth on August 30th 1972 in the Czech Republic, Nedved devoted every single aspect of his life to football. There simply couldn't be any other explanation for a man who's career has lasted this long. Incredibly, even at 36 he continues to be the hard-running midfielder we've fell in love with since he began wearing our colours back in 2001.

Let's take a second or two to just talk about this man's left foot shall we? How many times have we seen 'top-flight' players around the world running along down the left flank, get into the eighteen yard box, and blow the chance sky high cutting back inside to take it on their dominant foot? One too many my friends. Pavel Nedved doesn't know the meaning of cut backs. In fact, he has a phobia about going anywhere but towards the net. Wait, did I mention he's right footed? Anyways apart from his great left, he always had some of the deadliest touches in the game.

It's truly been something to behold seeing him crack-off a bomb with his left or right out there for so many years. It's so beautifully veteran-like that it touches a football fanatic's heart. I think I'll miss that the most really. Here's a little cracker from this season you'll surely remember. I don't know what's better though, the fact that a brilliant Polish commentator called Pavel the "Czech-ski Express", or that he hit this against those Roma fans who just adore Pavel in every way, shape, and form?

Those types of goals from him are legendary. Speaking of legendary, how can we forget about his hair? Unbelieveable. I've been going to Halloween parties as Pavel's highlights on and off for four years now (sometimes I went as Tiago's tampon). But seriously though, I'd be the envy of every girl there. Did you know each lock is cut to a length so they can never cover his eyes?

Of course in the end the legend has his regrets. His biggest, and most widely known, has been his quest to lift up that Champions League trophy one day. "I'd give up everything in my life for the Champions League, everything apart from my wife and kids of course," Nedved noted. "Even the games of golf with Alex Del Piero and Mauro Camoranesi which I enjoy so much. I'm missing the Cup with the big ears, it's the trophy which I desire the most. I'll be delighted to end my career in Rome next May, the venue for the 2009 Final, in the city where my Italian adventure started. I want to lift that trophy into the capital sky."

Well, we know how that one ended. Another year gone by and yet that space in his heart remains empty. No doubt that's been a big part of Pavel's commitment to a strong work ethic well into his later years- to one day raise that trophy he "desire[s] the most." Now think about just how dissappointed he must feel for missing the 2002-2003 final against Milan at Old Trafford.

"I regret not playing in the Final, even if the outcome may still have been the same," Pavel claimed. "That yellow card underlined just what kind of player I am. When I step on to the field of play I just give my all, without ever making any calculations. I lost the opportunity to win the European Cup and I didn't know whether I would have got another chance." 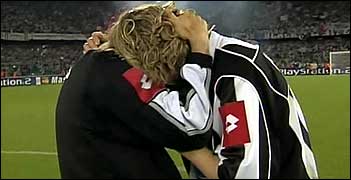 Anyone here think that game wouldn't have gone differently had he been playing? Gianfranco, put your hand down. That year he was awarded the Ballon d'or for Europe's top footballer. Enough said. But don't feel too bad for the guy, scroll down:

Not bad old man, not bad at all. Football has opened many doors for Nedved, and true to his style, he probably opened a couple himself. He was a born leader who lead by example. He took every game seriously, and that sort of professionalism visibly rubbed off on his teammates making this decision that much harder to swallow. I was always happy to see him wear him the captain's armband because of that. This Juventino will certainly miss Nedved very very much. Forget about trying to replace a Nedved. We shouldn't even bother trying.

Those who claim him to be malicious or soft have certainly misjudged his game. Nedved has been a great asset to this club and one of the best examples of what it means to be a bianconeri. On Sunday playing in his final game against his former team, you can guarantee he'll have an enormously respectful sending off. Grazie Pavel, thank you for all the wonderful memories. This Sunday there should be nothing more important than Nedved. A player who never played for second place.