Share All sharing options for: Antonio Conte: The next "great Italian manager"

Conte was one of my favorite players of all time, probably in my top 5 if not top 3. (Probably Tacchinardi, Del Piero, Conte) Who can forget his versatility, his clutch goals, his balding head, or his sheer passion for Juve? This summer I wrote a Juventus Legends piece on Conte, check it out if you never saw it. Everyone loves former players going on to be coaches. Why? Because we can continue to follow our idols, they don't die. Baggio just seems so distant to me, just a wonderful memory now. This, we can say, is then a preview to the wonderful career he will have as a trainer. 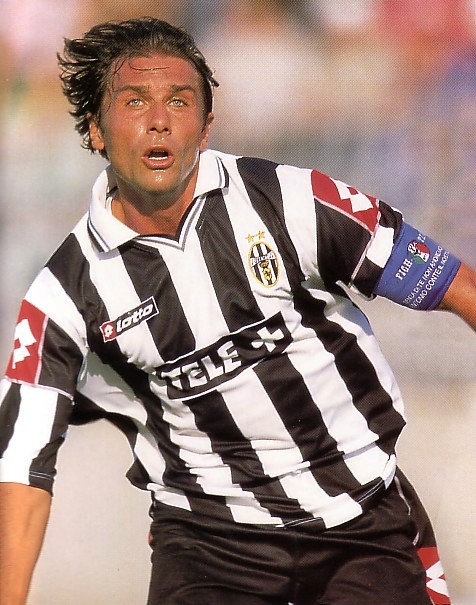 This piece isn't really about Juventus. It's more about Antonio Conte and Bari, about profiling a legend and his beginnings as a coach. Antonio Conte is going to be a wonderful coach. Who is surprised that such a tactically brilliant player would start so brightly? He started his coaching career as an assistant at Siena for a season alongside current Lecce coach Luigi de Canio, before signing with Arezzo as their head coach. (According to wikipedia, Arezzo was first named Juventus Football Club Arezzo. There's 10+ such tribute clubs across the world) Many may remember his Arezzo, as his only season with the team was our season in Serie B, 2006-2007. Despite coming off a positive season in 7th place, Arezzo was one of the "smaller teams" that was punished by Calciopoli. This understandably led to severe difficulties at a club that was already struggling financially, and was slapped with a 6-point penalty. He was sacked not even two months into the season, and then reinstated in March where he led the team to 5 straight wins, 19 points from 7 games. (though a 5-1 hammering from Juventus in May) The team was close to salvation but dropped to the dungeons of Serie C/Lega Pro on the last match day.

Despite the positive fight towards the end of the season, it is never a good thing for your club to be relegated. But the odds were stacked against him from day one. He was unemployed for about 6-7 months before Bari came calling....and that's where the story starts. Despite being from Lecce, he signed on with the Salentini's archrivals Bari in December 2007. 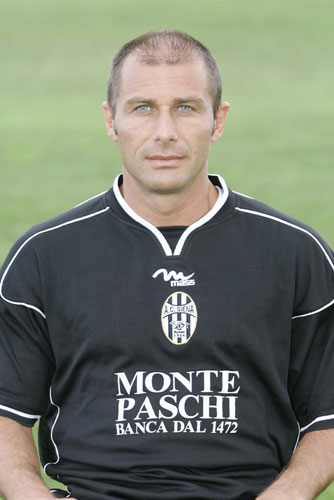 Let me tell you a bit about Bari for a second, because I am sure most people are unaware of their history, and it's pretty important to understand why the media is buzzing about Conte. I've always followed them, no worries loyal readers, Juventus was, is, and always will be my primo amore. But being Barese, I've always been a simpazzante. Bari is one of the more famous/storied teams from il Mezzogiorno, but ever since being relegated to Serie B in 2001, it's been somewhat forgotten. Perhaps because its' most famous player, Cassano, was sold the summer of relegation.

The next season the team made an effort to get promoted back into Serie A, but fell flat and finished in 7th. The next few years would be midtable mediocrity, before in 2004 the team was relegated to Serie C having lost a playoff to Venezia. Thankfully, Napoli and another team (Ancona I believe) took their place due to financial difficulties. The team always had talented players, such as the great keeper Jean Francois Gillet (of Belgium) who could easily be playing in Serie A but stuck with the team during relegation and up to the present. Bari became known as the team that choked, that couldn't put together consistent wins or grind out victories. Anotherwords, the team became the Roma of Serie B. Several years of midtable finishes followed, and when Italy won the World Cup in 2006 I couldn't help but think of the San Nicola, Bari's stadium built for WC1990 and if the team would ever get out of their average finishes.

The team did, but in the wrong way. In 2006-2007, Inter was storming to the title with Marco Materazzi banging in the goals. Juve was pushing to the Serie B title, whereas Conte's Arezzo and Bari were plummeting towards the drop. Bari hired the Matrix's father, an ex-player and coach, to save the team from relegation. Giuseppe Materazzi did well to bring the team into a 14th place finish, though only a few points above the relegation drop zone. As Conte's Arezzo dropped into Serie C, the team confirmed Materazzi as coach for 2007-2008. The team was no longer mediocre, it was awful. By December, the team was in 18th place and Giuseppe Materazzi announced his resignation to the Matarreses (yes, as in the President of Lega Calcio, and no, no one in Bari really likes his family) after a 4-0 crushing defeat to promotion chasing archrivals Lecce. 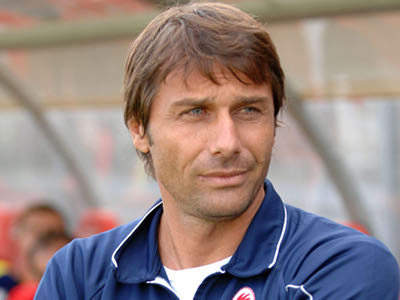 It was time for Conte. Immediately, the team picked up some positive results, but no one knew whether it was because of the coach-change-honeymoon. The team finished in a comfortable 11th place, perhaps back to mediocrity. Bari announced Conte was their man for 2008-2009, confirming him for another year on the bench. As Francesco of the Italy Offside suggested, Bari was not necessarily a favorite for promotion, but alongside Brescia, favorites to be in the top 5. Great predictions, Francesco, the top 6 are the same as your top 6.

The team started out well, not excellently, but good enough. During the spurts of Salernitana, Sassuolo, and Empoli at the leaders position, all which have faded a bit, Bari was plugging along in 5th-6th place. The team's defense was solid, but the goals were not coming fast enough. It was December when things started to go into overdrive. The team put together some great results, and while it drew a few times in February, by March the momentum was clearly with Bari. When Bari defeated fellow promotion candidates Sassuolo on the 29th matchday in March, for the first time in years, Bari was at the summit of Serie B. It has not lost its' leadership since then, and is assured of a spot in Serie A for next season. (Excellent for all Bari fans considering bitter rivals Lecce are almost certain to drop to Serie B, why do you think they voted against the Serie A/Serie B split!?) 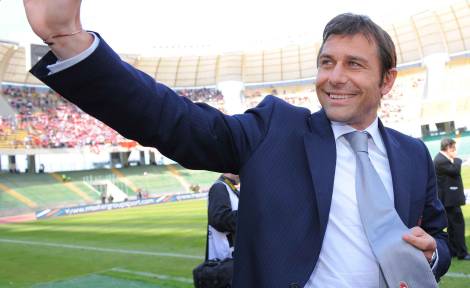 What's most impressive about Conte is the spirit he brought to the team. For a group of prestigious choking underachievers, he has given the team a winning attitude, picking up several impressive scalps on the road. The team has continuity; for a team known for inconsistency, this is huge. Under Conte, the team notched up its' most consecutive victories in Bari's 101-year history, in any division. He's tinkered formations, played young players, and aided impressively in the development of players such as Ranocchia, Lanzafame, Barreto, (20 goals in Serie B this season), Masiello, and Guberti. Veteran fan favorites such as Gillet and Gazzi have also had great seasons as well. The team has played an attacking yet defensively-tight approach, with the 2nd-best attack and 2nd-best defense in Serie B despite several goal droughts in fall.

Taking note of this, the media has expounded that Juve could be his next destination, and fans have picked up on it even if they have never seen Bari play. Conte has always admitted it is his dream to return to La Vecchia Signora, to continue his storia of amore with the club. (after a tough loss earlier this season to Sassuolo, Conte shook his head responding to links to the Bianconeri and said "Juve? Yes, to (Serie C) Juve Stabia.") Alongside fellow ex-Juventini Prandelli and Gasperini, he has been heavily linked to the Juve hotseat following his impressive exploits with Bari and continued questions over Ranieri's leadership.

The current rumors have suggested Lippi wants Cannavaro as a technical director, Conte as a coach, and Lippi would return as the Transfer Director. Conte is a very good coach, his tactics, man-management, and professional demeanor have all been top notch, but I do not believe he is ready for Juventus. He has done well with Arezzo and Bari, but Serie B is much different from leading your team against a team like ManYoo in the knockout stages. 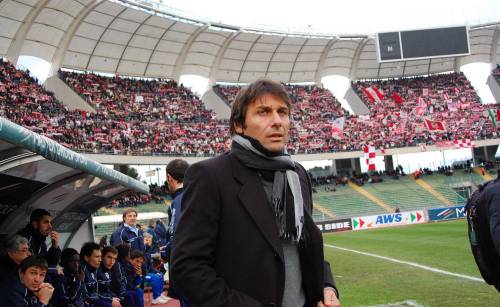 I would like to see him coach Bari in Serie A next season, to see how he does. It will be difficult, as many of the promising youth that have flowered under his leadership are not owned by Bari; ie- Lanzafame, Baretto (Udinese), Ranocchia (Genoa), and Guberti (free agent seemingly destined for Roma). As I found out while coaching Bari in Football Manager, he is going to have to replace 1/2 of the team, whether due to inability to rise to the challenge of Serie A, or precisely this loan-situation. I'd like to send a few Juventini to his squad, as we have done already (Lanzafame, Bianco, Volpato, etc) perhaps Castiglia, Daud, etc. Coach Bari for a few years, and then if he has proven his mettle, join La Vecchia Signora again.

The reason I wanted to write this post was despite all the media news around Conte, I imagine few people really know what he's done or where he has been, other than that Bari is currently at the top of Serie A. With Gasperini, Prandelli, Spalletti, etc, we can all watch their teams play, hear their soundbites, and check the Gazzetta's pagelle the next day. Not so true with a coach in Serie B. I do hope you enjoyed the post about Conte, Bari, and the rigors of coaching in a crazy Serie B world.

Now here is a question for all of you...do you think Conte is ready to head back home to Turin? Of the following, who would your preferred coach be for next season? For me, it would be Gasperini, I like him better than Prandelli. Or Deschamps, but I don't think the board will bring him back.It will certainly be interesting, as I cannot imagine Prandelli or Gasperini leaving their team with Champion's League qualification. (which is why I'm secretly rooting against Genoa...though I also believe the team is not ready for the Champion's League yet) Vote below!

Who do you want on the Juventus bench next season?(answers)