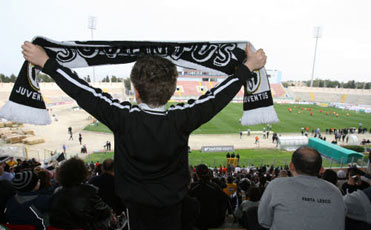 Champions League, Scudetto, Coppa Italia, and now second place. I'm feeling really depressed about my beloved club tonight guys and girls. Ideally I'd want to write something here that would rally us around the team in a positive way but I can't seem to muster that kind of thinking right now. This isn't about the draw against Reggina yesterday, or the loss against Lazio (I could really go on here)... but this has been brewing for a while. I just feel as though we've lost our way and I so badly want my Grande Juve back.

Here's a snippet of an article I found recently that represents a little piece of where these feelings are coming from;

Comparing the Triade of Antonio Giraudo, Roberto Bettega and Moggi to Giovanni Cobolli Gigli, Jean Claude Blanc and Alessio Secco is like comparing The Three Tenors to the Marx Brothers. And when you throw Ranieri in front of the camera as well, you really do have a comic act that surpasses anything ever seen in Hollywood. Turin-based newspaper Tuttosport have made it clear that they have no trust in the current Juventus project, and this morning blew up a huge front page picture of the quartet minus their weakest link Secco, headlined: "Restate Tutti?" - "Everybody Staying?"- goal.com

Fuck keep Blanc if you must. From what I can tell his only job has revolved around our Delle Alpi reno. But come on, Secco and Gigli just need to get the fuck out. Bring in some ex-Juventini who've worn our colours with intensity and pride (fast forward video to 2:35). We need one or two veterans there who've played the game at a high level and who know what it takes to win. Not some bunch of posers and University grads, myself included. This argument also refers to Ranieri's (at times) way too diplomatic diposition and his extremely predictable style of play i.e. wing wing wing wing wing cross cross cross cross cross.

The ultras of the Curva Sud have come together in protest and have released a statement warning the directors that they won't stand for another season like this. "Juve are a prestigious side and we won't let anyone turn this into a provincial club that is sent spiralling by any old opponent," slammed the supporters. "Enough of these false champions," added the open letter- C4

Enough of these false champions indeed. Stop the penny-pinching! Every die hard Bianconero/a feels to a certain degree what was discussed here. In the end, I guess that's the positive thing we can take away from this post. In Italy we've got the most amount of supporters, and thanks to blogs/forums like these we can try to amass and mobilize an even greater number of voices throughout the world. Whether or not we can get Secco or whoever fired because of it remains to be seen, but you have to start somewhere right?