Juventus-Inter; Not what it Should be

Share All sharing options for: Juventus-Inter; Not what it Should be

Two weeks ago, I would have been a lot more excited for this game. But with the Scudetto race over, we are just playing for pride. With Milan approaching, 2nd place is still up for contention, and some say we absolutely need to beat out Milan for it. I frankly couldn't care which we finish, both of them are losing spots and whoever wants to be the "closest loser" can have the honor. Inter coaches and players are saying the Scudetto isn't won yet, which is understandable given the clubs history, but it is. Even if Juventus wins, 7 points is too great to conquer, especially given our recent form. But there's still pride. J. Zanetti called this game bigger than the Milan derby. For us, this is certainly bigger than the Derby della Mole. Let's hope Claudio and Co. can keep the 3 points in Turin. Full preview after the jump.

Statistics from Juventus.com....
Juventus.com brings you all the information you need to know to follow the match at the Olimpico in the best manner.

INTER IN AWAY MATCHES
The two defeats suffered during the 2008-09 championship were both suffered away from Milan, even thug the first only on paper since it happened during the derby with Milan listed as the home team. He second defeat came on the last match day of the first round a heavy 3’1 defeat suffered in Bergamo. The rest of the matches brought great satisfaction with 11 victories and only 2 draws, the first of which in the first match of the tournament (1’1 against Sampdoria) and the second in Florence (0-0). Definitely positive is the outcome of the first round, having registered an en-plein with 5 favourable results in as many encounters. The victims were Catania, Lecce, Bologna, Genoa and Udinese. It is good to note the encounters in which Mourinhoàs formation suffered a negative balance in terms of occasions. The circumstance occurred during Atalanta-Inter (8-4), Catania-Inter (7-4), and during Bologna-Inter (4-3). At home, the nerazzurri risked losing during Inter’Roma. A match which ended in a 3’3 draw complete with controversies and which saw the giallorossi dominate in terms of goal chances by 8-5.

THE MOST FAITHFUL
There is one item of data which explain best the strength of Inter during the 2008-09 season. The 5 most utilized players by Mourinho in the championship represent without any doubt the best virtues of the team. The most present is Javier Zanetti, who gathered 31 appearances in 32 match days. Right after the captain is the traditional block represented by Julio Cesar, Ibrahimovic, Maicon and Cambiasso. In all, 25 players were utilized up to now, as opposed to Juventus who made use of 28 players (including the 3 Primavera talents: Ariaudo, Daud and Immobile).

THE APRIL VICTORIES
There is one precedent with an interesting coincidence in which Juventus and Inter met on the 18th of April. It happened in 1971 and even there Inter was launched towards the victory of the scudetto and the margin in the table was 10 points (at the time the points for a victory were 2). The match ended in a draw with a goal in each half. The bianconeri had gone ahead thanks to Marchetti but were equalised thanks to a goal by Inter midfielder Bedin ten minutes from the end of the match. It is, however, a month which traditionally favours Juventus when the bianconeri meet Inter in Turin. The positive series was inaugurated in 1955 with a 3-2 thanks to goals by Praest, Montico and Manente in a year which saw the bianconeri and the nerazzurri unusually placed in mid-table. On the 19th of April 1959 the result was the same but the match was very exciting with the milanesi ahead until 10 minutes from the final whistle when Ferrario and Boniperi turned the result round to a final 2-1 in the nick of time. Another memorable match is that of 1972, decisive in terms of the title race because on that particular Sunday Juventus managed to gain leadership ad the possibility of winning its 14th title. The absolute protagonist was Franco Causio who scored a hat-trick which represents one of the greatest feats of his splendid career. A penalty scored by Brady decided Juventus-Inter in 1982 and inaugurated the series of 1-0 results in April which pursued in 1994 thanks to an own goal by Riccardo Ferri after a cross by Roberto Baggio and came to an end in 1998 thanks to a winning right shot by Del Piero in what was one of the most controversial matches in the history of Italian football. On the other hand the 3-1 on the 14th of April 2001 leaves no room for arguments. In just 12 minutes from the beginning of the second half Tacchinardi, Inzaghi and Del Piero guide Juventus to a victory which is difficult to replicate and which allows our opponents only the chance to get back a consolation goal scored by Christian Vieri from the penalty spot.

Recent Encounters: Who can forget these? For me, they are the most memorable games since Calciopoli, except for maybe the exciting thrashings of Milan. An incredibly tense 1-1 draw at home, followed by an emotional 2-1 win in the San Siro that broke a several-year long home fortress streak. Earlier this season was a game to be forgotten, while Inter was luckily to win, Juventus looked unnaturally scared, creating few chances and generally not having possession.

Recent Form:
Juve- WWW-PointlessInternationalFriendlies-DL.
Inter- WWWWD. Most of them probably undeserved. Two weeks ago was why they are winning the Scudetto and we're not. We draw Chievo 3-3 at home, same weekend, Inter beats Udinese on a freak own goal. 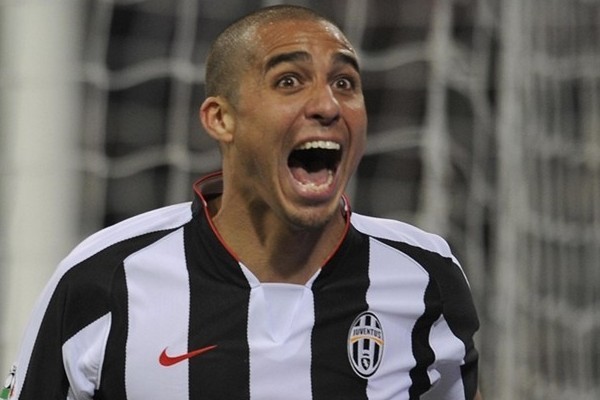 Formations:
Juventus- 4-4-2, baby. Inter's midfield is full of dumb, slowwitted ballwinners. I'd propose the trident for this game, but I think that would be conceding the midfield battle too easily to Inter, especially with Marchisio, Zanetti, and Sissoko out. Ranieri is going to miss out on Camoranesi and Marchisio (suspended), whereas Brazzo, Sissoko, Zanetti, and Manninger will take no part due to injury. The big question mark, obviously, is the midfield, as we'll be missing 5 players. Some have suggested this is the chance for the flops to prove themselves (Tiago+Poulsen, but I wouldn't call Poulsen a flop yet) but if that's our center-duo, I may cry. Play Nedved as a goddamn center-mid! He's been excellent there thus far and that would free up space for Giovinco to play on the wing. Expect Marchionni to fill in for Camoranesi on the right. Up front? That's a tricky one. Amauri is back in the group, but I don't expect to see him play coming back from an injury. Iaquinta is unbenchable right now, so it's a straight shootout between ADP and Trezeguet to partner him. I would like Trez to start this one, we need a penalty box striker, plus it would be a good show of faith from Ranieri. If we have a midfield of Giovinco-Nedved-Tiago/Poulsen-Marchionni, there will be plenty of creativity and service for the two forwards.
Predicted lineup: Ranieri's gonna kill me on this one. Buffon; Grygera, Legrottaglie, Chiellini, Molinaro; Marchionni, Tiago, Poulsen, Nedved; ADP, Iaquinta 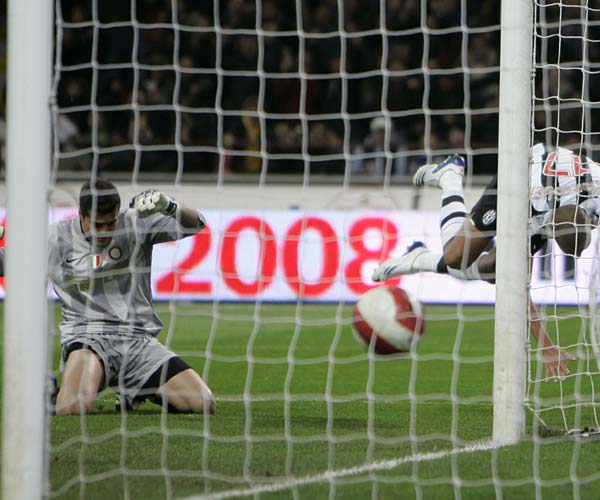 Not Atalanta 4-3-1-2. Sacking Mancini and hiring Mourinho did nothing. Mourinho's 4-3-3 went out the window pretty quickly, and he reverted to Mancio's 4-3-1-2 with Stankovic going from transfer-listed to fundamental player. He also followed in his footsteps by bowing out of the Champion's League in the round of 16. Lovely. Mancini, Obinna, Maicon (good), and Jimenez are all injured, Adriano is AWOL probably drinking in the favelas.
Predicted lineup: Cesar; Santon, Cordoba, Chivu, Maxwell; Zanetti, Cambiasso, Muntari; Stankovic; Balotelli, Ibrahimovic.

Key players to watch:
Juventus- The Calabrian Cannon. Duh. Have you seen him recently?
Inter- The Only Schnozz Bigger than Chiellini Zlatan recently said if he was a Juventus fan, he would jeer himself, and he's expecting it. Good. Expect a lot of Zlatan Zingaro chants, and yet another anonymous game. 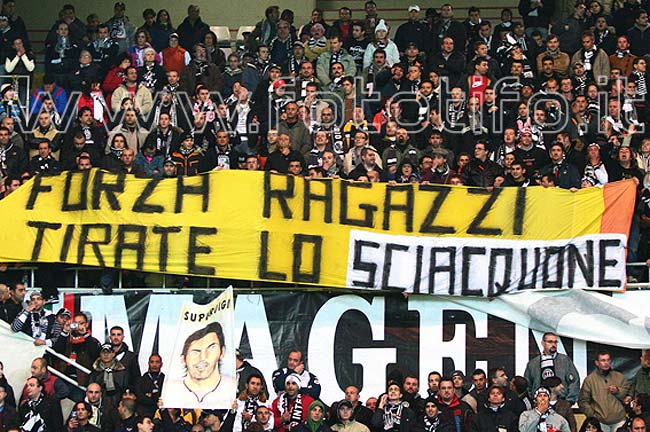 Key Battles:
The Flops v. Bald Ballwinners: Inter; Ugh. Please Claudio, the derby is not the time to try out Tiago-Poulsen. Muntari and Cambiasso would eat Tiago alive.
World's #1 v. Dida #2: Push; It's well known Buffon hasn't been the same this year, but this game should be all the inspiration. The other guy is pretty damn good, but he's Brazilian, give it a few years.
Italian Schnozz v. Zingaro Schnozz: Giorgio of the Jungle; Nuff said.
2007-2008 Molinaro v. 2008-2009 Molinaro: Push; I'll give the kid some credit. He's upped his game, particularly the defensive part since last season. Could someone teach him to cross a goddamn ball?
Ranieri v. Mourinho: Ranieri; I'm wholly unimpressed with the Arrogant One. After losing in Milan and losing to Hiddink, Ranieri is gonna finally get some Chelski revenge.

Prediction: 2-1 to the good guys. Tiago has yet to score for Juventus, I think he's the only one in our Starting XI, and it'd be sweet for him to score on his old manager.....but it's not gonna happen. Iaquinta and the Furia Ceca as a nice retirement present.