Genoa's victory on Saturday pretty much destroyed any remaining Scudetto hopes for the Juventini. Once again, a disastrous return from a break seems to have ruined our season. Naturally, we've already started to think about the mercato, possibly changing coaches, and the prospects of the upcoming season, but there's still 7 games to go.

What is there to play for? Well, the Coppa, for one. But as we all know, it is a worthless consolation trophy, and that's it, though it'd be nice to put a Silver Star on our jersey ahead of Roma. What else? Pride. That's all that's left, and with tough games against Inter and Milan, that is paramount. Some might say we should finish 2nd ahead of Milan, frankly, I couldn't care. Thanks to Uefa monkeying around with the Champion's League, the top 3 in Italy go directly to the group stage. Milan finishing ahead of us would only convince them that their team isn't in crisis; other than that, I don't think being the bigger bridesmaid is terribly important.

For now, everyone generally assumes Ranieri will be at the head for next season to finish out his contract. Since silverware is an impossibility (except the Coppa, but again, no one cares about it) it's time for Ranieri to tinker with the squad. Why are we so shit after breaks? Why do we have one of the better defenses in the league that absolutely goes to hell against Pelissier at home? (Mellberg, I'm looking at you.) Is Tiago actually going to cut it at Juve or is he going to remain at this wildly inconsistent level? Can Giovinco get an extended run out in the league? Where is De Ceglie's best position? Is Zebina better than Grygera at right-back? What the hell is going to be our starting lineup next season? There's plenty of others. 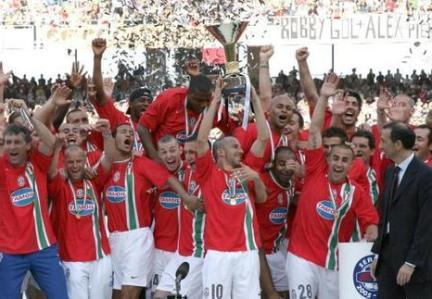 If this was last season, I would say beat Milan and Inter, and the other results are slightly less important. But we're building, presumably, to win the Scudetto next year. We can't lose or draw with the Cagliaris and Chievos at home, no matter how good they are, if we want to be Champion's. Perhaps these games will be even more important than the other two, with nothing to play for, can we summon the grit and determination to beat 3 relegation-fighting squads? We've had mediocre results against these squads with the Scudetto on the line.

With the Derby d'Italia coming up, most Juventini are understandably not as excited for it as we were only two weeks ago. But the run-in to summer break, however disappointing it may be, should not be discounted or ignored. This is the time for Juventus to figure out if we can win the Scudetto with this squad and this coach, and if not, what we need to chance.