I don't get it, honestly, I don't. I am a big fan of Cassano, having watched his genius-yet-insane "coming of age" story, if you will, at Bari. I really hoped Moggi would swoop in and sign him, but sadly, Roma made a better offer. (and now they are buying Baptista and Riise...) Moggi pulled out over questions of Cassano's behavior, yet again showing his astute judgment. (He also pulled out of the running with Gilardino over questions of the players ability to thrive in a top-3 environment. Jury's still out on that one.) More after the jump. 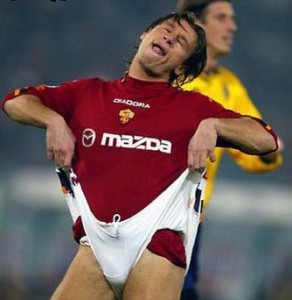 You knew this picture was coming...

Cassano is no doubt one of the best players of the world, and because of that, he's been linked with one of the best clubs in the world. Given the fact that Sampdoria won't be asking for an exorbitant amount of money, and you can see where the rumors come from. I'm fine with rumors. We've been dealing with Diego-to-Juve in Tuttosport for over a year now, nevermind the fact that we have a younger, Italian Diego at the club already. But this rumor seems to be picking up some steam.

The question has been posed to just damn near every single Juventus player, staff, janitor, youth player, patron.....etc. over the last few months. What do you think of Cassano at Juventus? Opinion, not surprisingly, has been sharply divided.

Not my major concern anymore...

In the "Sure, he's a great player and Juve could use him" camp
-Cobolli: "Nothing is impossible. Nothing is possible." Brilliant attempt to rival Rumsfeld, Cobolli. He later openly said we were following him. Great.
-Ranieri: "If Juventus were able to give him to me, I would gladly take him." Alright, a bit less confusing. Thanks, Claudio.
-Marchionni: "I played with him in the Italy U-21s...He could be the heir to Del Piero." Somewhere, Giovinco is crying. Goddamnit, Marco.
-Tiago: "Cassano has quality and he could definitely add something to the team." Is he officially off the Juve shitlist?
-Del Piero: "We have different roles, and could play together. As long as we bring in champions, it's good." I'm not so sure about the different roles, but Del Piero is definitely up to the challenge.
-Buffon: "To win, you need champions, and Cassano could certainly help. 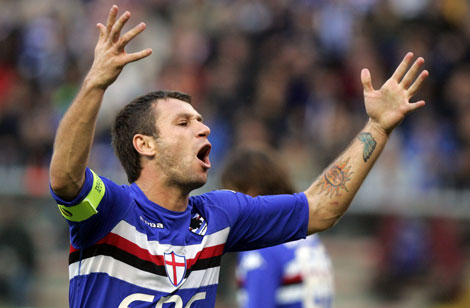 In the "What the hell is the management smoking and where can I get some?" camp.
-Ranieri: "I sincerely think we are set without him." Interviews always distort things, complimenting Cassano doesn't mean he's coming. I don't think Ranieri wants him.
-Chiellini: "He would be a fifth striker and it’d mean changing the tactical system. Antonio has great quality, but he would only be reinforcing an already exceptional group with David Trezeguet, Amauri, Ale Del Piero and Vincenzo Iaquinta. Dealing with five strikers of that quality is fantasy football, unless of course we adopt a different system." Thank you, Giorgio. Thank you.
-Serafino Ingardia: Alright, so I'm getting desperate to add people to my camp. And yes, it's a Channel4 blog, but they occasionally publish some smart ones. Selective reading, people.
-Me.

I suspect several members of the squad don't want him on the team, for the reasons Chiellini and others said, but these are just quotes where they say he's good. I think T.O. is a damn good wide receiver (sorry for the NFL reference non-Yanks) but did I want him to join the Bills? Hell no. I just don't get it. I don't have problems with his temper, he has done an admirable job of keeping it in check for over a year. As captain of Sampdoria, it seems Peter Pan may have finally grown up. But we just don't need him. Chiellini is right on the money, we have 5 great strikers, and it's hard enough to find them all enough playing time. Vice-Nedved? I don't think so, I've never heard of Cassano being able to play left-mid. Nor do I think he would enjoy it there. Playing him on the wing would just be a waste of his talents.

Same argument as the Diego one, too. If we chose to play Cassano as trequartista behind Del Piero and _____ (filll in the blank) why wouldn't we be giving Giovinco a go there? Cassano and Diego are just going to force Giovinco out of the club, who has shown remarkable patience, tactical versatility, and all of his qualities in the brief time he's been playing. We already spent 20million+ on Amauri, let's not do it again. Let's save the money, and buy a winger to replace Nedved properly.

The only way I see Cassano arriving is if one of our strikers leaves. Iaquinta, maybe Trez (although after 5 straight summers of hearing that, I'm not buying it), or shudder, Giovinco. Then, it would be an alright purchase though I still think our money could be spent much, much better reinforcing other areas of the team. It also bothers me how much our management discusses in public. Maybe the fact that Cobolli refuses to name other targets means we really are not going for Cassano, and it's a smoke screen. That'd be Moggi-esque. But after last years Amauri saga, it could be true. I miss the days when Juventus wouldn't make any specific comments and then we wake up and Pavel Nedved is wearing a Juventus jersey. Or Vieira.

It could be all smoke and mirrors, or it could be that where there's smoke, there's fire. Buying Cassano is just plain the wrong move when we have a good mixture of experienced, professional and loyal strikers up front.

Oh, and he's an avowed Interista, too.