The March On Rome

Share All sharing options for: The March On Rome

Match day after match day for the last few months, it's become more and more mathematically obvious that we're Inter's only competition for the Scudetto this year. Sta sera, our club will be up against a notably depleted, but cagey, Roma side that must fall if we are to continue the chase for the Serie A title. The Darkside looks like a lock tomorrow at home against last place Reggina, so coming away with three points at the Olimpico will be huge. 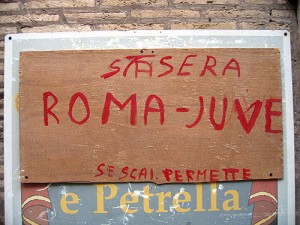 Will the real ‘Capitano' please stand up?

Tonight, Totti and I will be watching Del Piero while only one of us hopes he provides the same sense of urgency he did against Bologna. Coming from behind in the second half was spectacular to watch and most of the comeback, if not all, was written on Del Piero's face well before our first goal. That's why he gets the armband, and for me there's no one better in Italy. Tonight, along with finding his legs, he'll need to find the same intensity here. Our players will respond in kind so he'll be responsible for setting our all-important tone here.

Speaking of our players, according to a statement released yesterday on Juventus' official website, both Marchionni and Nedved have "completely recovered" from their injuries. Will they be featured here? Probably, but not from the start. My guess is Salihamsandwich and Giovinco will get the nod. As for Legrottaglie and Marchisio, neither of them trained with the group yesterday and their conditions "will be evaluated" before this one a.k.a. Spalletti mind-fuckery.

Since we all love goal.com for it's hard-hitting analysis' and their no non-sense approach to transfer rumours, I thought we'd all enjoy this effort they made in figuring out some key match-ups:

Both coaches must deal with extensive injuries, so some creativity and formation-fiddling is necessary. The one who can adapt to the absences best will definitely have the advantage.

Since taking over Juventus, the ‘Tinkerman' is undefeated in this match-up with two wins and a draw in Serie A. The Giallorossi will be hoping Spalletti can break that unpleasant trend in order to keep their European objective intact.

The match-up between the goalkeepers will be an interesting one. Doni, cementing his place in the starting line-up over the past years, is a keeper with incredible reflexes, but lacks the decision-making ability and poise of the ‘master' shot stopper, Buffon.

The Italian international has found his feet again after returning from a long layoff, and in each passing match he seems to be building towards the commanding presence he was. If the ex-Parma player is at his best on Saturday, then Juventus will be far more confident of taking home three points.

Veteran wing-back Tonetto excelled in his midfield role last Sunday against Sampdoria and a repeat performance would certainly help the cause. The 34-year-old made the left-side his own, running tirelessly and even grabbing an assist in the process.

Salihamidzic also was a top performer in the 4-1 win over Bologna. The former Bayern Munich star was a force to reckon with and it will be interesting to see who will come out on top on that side of the pitch come Saturday night.

Two golden players of Italian football, they are set to have several one-on-one confrontations. Their experience and passion for the sport has blessed Serie A for several years and these players, full of character, will attempt to lead their sides to victory with a classy showing.

Only one is actually nicknamed ‘The Beast,' but you cannot help but feel this is a conflict between two strong individuals who could decide the match. Chiellini has recovered from a nose break in time to try and tame Baptista, whose confidence will be high after a brace in Genoa.

With Daniele De Rossi and David Pizarro suspended, Matteo Brighi will have to pick up the slack in midfield and do plenty of ball-chasing. Meanwhile, Tiago should be able to dictate the play for La Vecchia Signora with a second choice midfield line being his opponent.

Vincenzo Iaquinta has the chance to show his worth with both David Trezeguet and Amauri out of action, and he notched a late goal in this contest last season. Mirko Vucinic is a doubt to feature, but has the quality to turn the match in I Lupi's favour if he does pull through.

Tonight two things are pretty clear for me. With a loss, Juventus can probably kiss the Scudetto goodbye. However with a win, we'll come out the other end stronger than before having won five in a row. This game stands to be another turning point in our season. Hypothetically speaking say we win in Rome, and Reggina exploits Inter's defensive woes. Can you say 'Jackpot'? We'll be at the top of our game and Inter will have just begun their famed degenerative mental tailspin. Ahhhh la vita è bella. 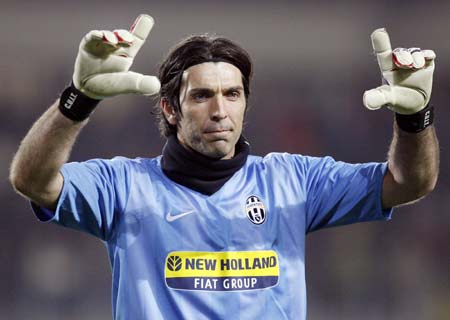