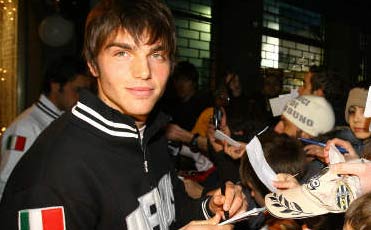 Paolo De Ceglie has officially become a legend in my books. Granted I'm only two years older than him and I might not have the necessary experience required to pass on that kind of judgement, however my books are still my books and he's officially a legend in them. Now unfortunately I wish I were reporting some good news here that can accompany our Coppa Italia semi-final birth, however what would another post nowadays truly be at the Juventus Offside without a new injury to report?

Claudio Ranieri will have to do without Paolo De Ceglie for a long period. The injury suffered during the match against Napoli will force the defender from Valle D’Aosta to a stop of many weeks.

The tests which De Ceglie underwent during the day at the Fornaca clinic, where he has been recovered since last night, have shown the damage to the fourth and sixth ribs on the right and the complete fracture of the fifth rib on the same side. This fractured allowed the penetration of a small amount of air into pleural cavity which is known as pneumo-thoraic trauma.

Such a prognosis is relative, apart from the objective clinical evaluations, also to the specific guidelines with regards to pneumo-thoraic trauma.

The player will remain at the Fornaca clinic for a period of up to 5 or 7 days.

The injury is so serious they don't even suggest any recovery time. I know we all truly wish Paolo a successful recovery and hope he can one day achieve the goals that his great potential suggests. Unfortunately these sorts of injuries can happen and are apart of the game. We never know when they will occur and it's best not to think about them while playing.

First things first, don't try and be a hero. This article wasn't meant to glorify hard challenges, or challengers that only go into tackles to hurt other players- not playing the ball. To me you become a legend in this game by playing clean but ready to bring the 'meat and potatoes' when necessary, fully aware of the risks involved by doing so. So don't just be a meathead about it. 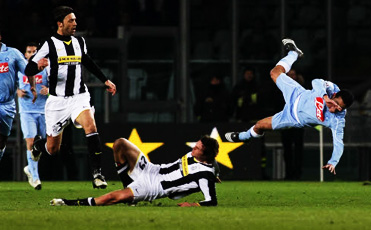 Paolo only commited himself because his experience told him he could challenge the ball. De Ceglie instinctively gauged the speed of the ball, the distance Gregano was from it, and the position he himself was in relation to those two variables. It's almost like a sixth sense which help defenders know when they can get to the ball first. Here, Maldini would be a great example.

Then comes the moment of contact. As defenders you must train yourself be totally concentrated on the ball. Anything less would have lead Paolo to a yellow card at the very least. Time suddenly stands still as he began his lunge forward completely aware of the oncoming opponent, but at the same time unable to completely avoid and protect himself from the ensuing impact. It's the most selfless act in football, and one of the most beautiful.

In the video clip I've added you can find the tackle at the 0:30 mark. You can clearly see Gargano's left knee smash De Ceglie's ribcage just underneath his right arm. A split second before Paolo's left foot interrupted Napoli's fast break. In the end we qualified for the semi-finals after extra time and penalty kicks. Personally, after what De Ceglie sacrificed for this game, I'm gunning for this cup like nothing else matters.