Share All sharing options for: Champions League: Chelski vs Bianconeri

Oh, how the times have changed at Stamford Bridge since Mr. Ranieri got canned back in 2004. Well not exactly. I mean John Terry, Frank Lampard, and Petr Cech are still there. Also Chelski favorites under "The Pompous One" such as Robben, William Gallas, Claude Mikelele, and Gudjohnsen were also either brought to the Blues or nurtured by The Tinkerman himself. So I guess in a sense not that much has changed really. But player personnel aside, Claudio Ranieri will make his return to the London based club in front of many fans who probably wish they could have the Italian tactician back instead of the mess they have now Goose Hiddink.

But Scolari's out and the Goose is ready to go. Hiddink takes over as the interim head coach until the end of the season when his future at the club will be further discussed- unless he's fired before then. Last weekend the Dutchman's side defeated the in form Aston Villa after Anelka struck his twenty first goal this season, in contrast to Drogba who's only found the net once all year. The biggest change you'll see in Hiddink's side is in the introduction of a 4-4-2 formation with the aforementioned Anelka and Drogba together up top.

Hiddink's recent thoughts on his side:

Chelsea must, and can, impose their game and not play reactive football. I like proactive football, and that's the way we worked in this (one week) period of training, to re-establish a proactive team. I cannot have a judgement about the recent past, what I try to do is find the strength of this team and one of the demands is imposing our way of playing. 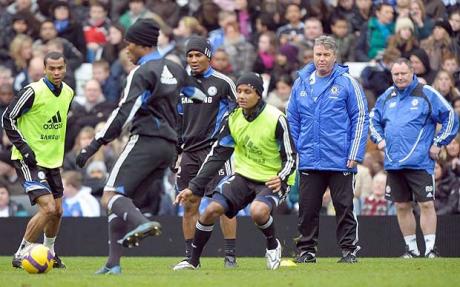 It seems though Goose, that the only one doing the imposing these days is Frank Lampard, who owes it all to Ranieri. Against Villa he practically gift wrapped Anelka's goal and has been Chelski's only bright light as of late. Anyways with direct orders from Ranieri, Sissoko will eat him up and spit him out. Conveniently for Juventus, Ballack seems to be playing at levels only seen since his house league days and the once grand Petr Cech has been looking a little shaky recently to boot. Against Villa, Chelski's defence was exposed a couple times and with a little more creativity they could've easily put one or two goals past the Blues. So I'm excited, the problem is Drogba might be too. Keep your fingers crossed there.

For Juventus though, we've been waiting for this moment for more then two years. Big victories against big clubs is apart of our petigree and we're hoping to prove a bit of that at Stamford Bridge. Del Piero, Camoranesi, Nedved, and Trezeguet will realise the magnitude of this game but it will be important for them to stay relaxed and not get too nervous (they're pros but it can happen). ADP will start with Amauri up front, as Ranieri will look to Il Capitano for more of the magic he showed at the Bernabeu vs Real Madrid back in 2008. Everyone and their nonna's know he'll be the key to our success in this game.

Against Palermo Tiago looked cool under pressure didn't he? I mean, shit, it only took him two years to adjust. Anyways, he played a solid game and the pair of CM's complimented themselves surprisingly well. The argument that Ranieri will start him over Marchisio this Wednesday to me is a fallacy. Marchisio should be well rested, and although the ex-Chelski man is in surprisingly good form at the moment by his own standards, Marchisio has more Champions League experience this year and he's definitely more dynamic. I think Ranieri had the option of playing Marchisio on Saturday but knew Hiddink would be watching. You see he's a tricky old man that Ranieri, he threw a bone to Tiago whilst keeping the book on Marchisio closed until Wednesday. It's brilliant, might not be true, but it's brilliant. 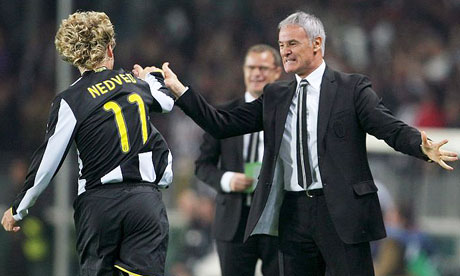 Nedved can't play another 90 mins just days after his effort in Palermo can he? Well no not effectively at least (sorry Pavel please forgive me). But knowing Ranieri, he wouldn't take the risk starting the young Giovinco in a game like this. However Seba's almost guranteed some playing time now so relax- let's say around the 85th minute or so lol. Now aside from Del Piero, Camoranesi's play is the next most important key to this game, if not equally as important. His creativity is glaringly vital here and now is the time we need him to find his form. Camo I've loved you from the moment I saw you, don't let me down.

Sissoko, who has already more than doubled his goal tally with Liverpool (3 vs 1), showed some great work ethic again and nicely finished on his second goal of year. I'll be honest though, Palermo gave him way too much time and space in their final third. For guy with a hard shot, they were asking for trouble there and Sissoko rightfully made them pay the price. Against Chelski we can't make the same mistake. Thus Sissoko's effort will be vital for us in our midfield. I've noticed that tactically when our opponents try and play up field, behind our midfield line and just in front of our defense, Ranieri turns Momo into a libero. Similar to a sweeper, Momo will roam a few feet above our back line and soak up some of the pressure. I can't imagine anyone in the world better suited for that than Momo. I expect Chelski to do well coming forward so we'll have to watch that area very carefully. I wonder if Ballack's ass is still stinging from the last time he got Momo'd?

Speaking of our defense now, Giorgio is unbelievably important to us here. As if that wasn't painstakingly obvious. Our defensive line against Chelski will have be tighter and more organized, and his wonderful sense of timing and movement, being a real step above Legrottaglie's, will provide us with just that. He's of a different class plan and simple. Just shut up Nicola and ride Chiellini's coattails to success. Without him we'd be dead meat defensively in this competition. Thank God he'll be there to keep us in check for our offside traps. That could be the difference between Drogba and Anleka... making the difference, or not.

I wonder what Ranieri's thinking of doing with Mellberg? He didn't play Saturday so he could be well rested for this game, right? I mean he was arguably playing his best defence up until he was left on the bench Saturday so that would suggest he's planning on playing here wouldn't it? Mellberg could either be starting with Chiellini in the middle, or like he did against Lazio a few weeks back, he could fill in for Grygera at RB. Really I don't care which position he plays, I just want him on the pitch defending. He isn't sick at coming forward but neither is Grygera. Also he's probably at least as good as Legro, and Nicola just played 90 mins v Palermo. But who knows, it's not as clear cut here.

And finally, Buffon. My God he hasn't lost a step since coming back. Still the best at coming off of his line, still the quickest at reading the play, and still fearless cutting down angles with surgical precision. It's true, some days you'd rather be lucky than good. But I'd always want Gigi back there in any case. He'll be solid for Wednesday, he always is. Lastly, Mr. Abramovich this one's for you... a one... a two:

I'll give you all I got to give if you say you'll love me too
I may not have a lot to give but what I got I'll give to you
I don't care too much for money, money can't buy me love