In front of Marcello Lippi and Ciro Ferrara (in Lippi´s hometown of Viareggio) the Juventus Primavera won the Torneo di Viareggio, one of the most prestigious youth tournaments in the world. 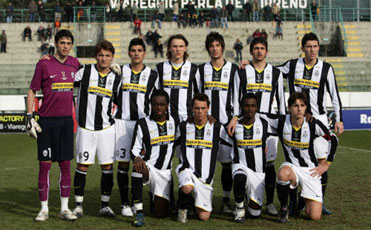 Primavera triumphs in the Viareggio Cup!

At the “Pini di Viareggio” stadium the bianconeri seemed to be determined and very concentrated right from the start. The bianconeri were dangerous in a number of occasions especially thanks to Daud and Esposito but the opener came on the 13th minute when Daud put a ball into the Sampdoria area with unfortunate defender Perazzo deviating badly for an own goal. The blucerchiati did not give up and tried to fight back but the most dangerous attacks were always on the other side of the field with Samp goalkeeper Fiorillo performing a number of very good saves. A few minutes before the end of the half the bianconeri increased the score margin thanks to D’Elia who put the ball through into the area with immobile striking home. Up to the half-ftime whistle Maddaloni’s boys ahd two more good chances thanks to daud with Fiorillo showing great class in his saves.

The second half saw Juventus score their third nearly immediately: Daud with a beautiful projectile upon entering the area hammered the ball into the corner of the net. This is the 8th goal by the Somali midfielder in this tournament who six minutes later tried twice more with the Sampdoria defence managing to clear at the end. Maddaloni’s team continued to dominate even though the blucerchiati were constantly in search of a goal to re-open the match. Sampdoria managed to get one back on the 38th minute after a slight deviation by Daud on a free-kick by Di Leva. Just before the final whistle Immobile dribbled past Fiorillo, voted best goalkeeper of the tournament and deposited the ball at the back of the net to fix the final score on 4-1.