Zanetti Out For The Season

Share All sharing options for: Zanetti Out For The Season 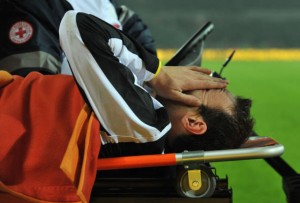 In an interview at end of the match Riccardo Agricola, head of the Juventus medical team spoke of the injuries suffered by Cristiano Zanetti and Giorgio Chiellini. "Zanetti’s injury does not seem to be encouraging. The player left the pitch suffering from a sharp pain. He will have to undergo other tests but the things seem to be rather complicated". "With regards to Chiellini, the defender felt the beginning of a muscle strain and decided to stop rather then force it. However, Giorgio seemed alright after the match even though we have to confirm this".

'Does not seem encouraging'? Well thanks doc' I could've told you that. What tipped you off? Was it the way he took off his jersey and sat there wincing? Or maybe it could've been the sight of him in a stretcher holding his face in his hands. In any case, C4 has taken Agricola's remarkably diplomatic statement and translated it into a fairly less bullshit explanation: Juventus will be without Cristiano Zanetti for the rest of the season. I don't even want to think about Chiellini right now.