Saturday night, just minutes after their hard-fought victory (no pun intended) against the nerazzurri, Ferrara went into his team's dressing room with something other than just praise for his men. Ciro, who was definitely just as over the moon as anyone of his players were, had to remind himself of his duty as head coach before he spoke to his lads of the hard work that's still left to be completed. Case in point, FC Bayern München and the Champions League.

On Tuesday, Decemeber the 8th, Ferrara'ssquad face their second big challenge in almost as many days. Withone point separating Juventus from Bayern in their Group A standings, a loss for the Old Lady would ensure heartbreak for us fans as well as Bayern's place alongside Bordeaux in the final sweet-sixteen of the European club tournament. As it stands, a draw would be enough to see us through. But as most of you know, playing for a tie against a team that needs a win is a recipe for disaster.

Back in September when these two teams met in Germany, the match wouldn't have ended in a scoreless draw like it did, had Franck Ribery been able to score a goal of the year candidate. Unfortunately for Munich fans, Robben's going to have to do all of the "Ich könnte mir in den Arsch beißen"-ing as Franck is still suffering from a tendon problem and will be unavailable for the Bavarians in this one. However if history can tells us one thing it's that Juventus is never one to be out done in the injury department.

Giorgio Chiellini. The defender from Livorno underwent clinical tests and an ultrasound scan, which were necessary after the light destructive trauma to the right back thigh suffered duringthe dying minutes of the match against the nerazzurri. The tests showed a first degree distraction to the right femoral biceps which will see the defender stop for 20 days to recover.

Gigi Buffon. The goalkeeper visited the Fornaca clinic this morning for magnetic resonance testing following the return of pain to the left knee. The result was the fracture of the lateral meniscus. The player trained and was called-up but his fielding against Bayern will be decided upon after the fine-tuning session on schedule for tomorrow morning. The operation is necessary and will be scheduled in the coming hours.

[EDIT] Sissoko. Sissoko will not be amongst the protagonists of Juventus-Bayern Munich. The midfielder is suffering of a muscular distraction of the first/second degree to the left foot.

If there was ever a time when this team needed a concerted effort, it's now. Like it or not, Legrottaglie's our boy for the next couple of match days while I'm sure some of you are a little more disappointed to know that Cannavaro will be as well. One would expect the aforementioned pair in the middle of our defense on Tuesday considering Fabio and Nicola's relative amount of Champions League experience, however Ferrara apparently has eight old/new faces that have at one time or another played some 'D' available .

As for our keeper situation, I think we can start talking about that next Saturday against Bari. Something tells me Buffon is going to start in goal. It's pretty obvious he understands more than anyone how much his presence means to his teammates and supporters, so hopefully he doesn't seriously re-injure that knee, in this, his last game ahead of surgery Wednesday. *Fingers crossed*

Apart from those three positions discussed, every spot on either the 4-3-1-2 or the 4-2-3-1 is pretty much up to discussion with the exception of Diego's starting role of course. Ciro really does have many possibilities he can choose from here so it will be up to him to decide on what type of game he wants to play against a Bayern side that has won three straight on the bounce and will prove to be very difficult to handle.

Mark my words guys, Bayern is going to be fucking hard to deal with in this one. From what I've read and the pictures I've seen, their coach Louis Van Gaal has them focused with a clear idea of what they need to do in Turin. If we play for the tie, we'll lose.

Franz Beckenbauer's take on the match:

“I had a coach at Bayern when I was a young lad called Branko Zebec. He said three words to us: patience, patience, patience. Keep it at 0-0 until a chance comes along then be ruthless in that moment. Bayern should also behave like this: they should think about defending first and then the goal will surely come."

Del Piero's take on the match:

“We have to go on the pitch with the thoughts, motivations and the stimulus that distinguished our last game against Inter. They are important qualities and we are conscious of the importance of this game. We want to go through.”

Ciro's take on the match:

"If we lose against Bayern then the win against Inter would be worthless, furthermore we would be out of the Champions League. Beating Inter has a particular taste to it, but I want to see more determination. We cannot repeat previous errors." 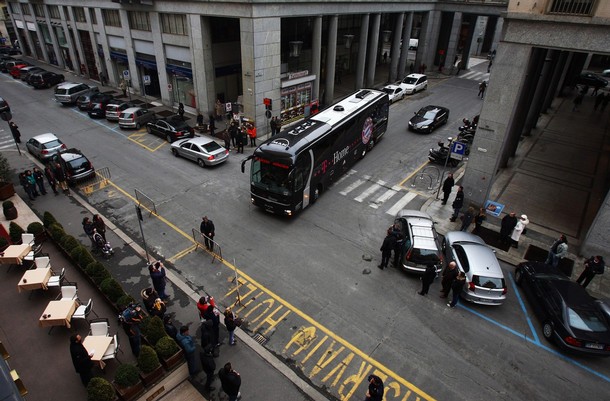 "Welcome to Torino, I'll be your wallet inspector..."