Juve triumphs over Nerazzurri, Serie A at -5

Share All sharing options for: Juve triumphs over Nerazzurri, Serie A at -5

For a Juventino and a neutral, that was everything we could have hoped for, an absolute intense physical battle. Of course, I am delighted with the result, and particularly the way our boys fought for our pride out there. Ratings, and full review after the Buffon-style jump. 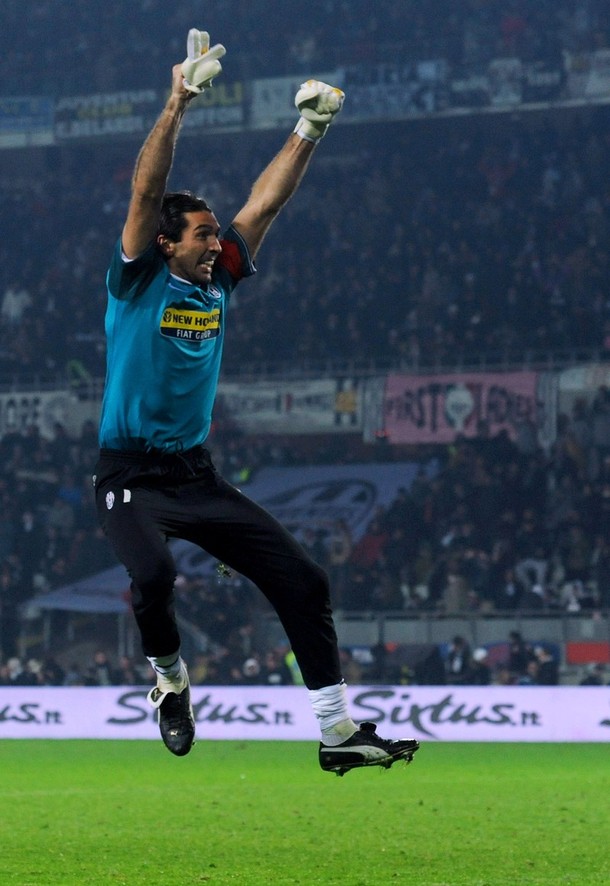 Buffon: 6- Today was an odd game for SuperGigi, who did two things uncharacteristic; first, he (sorta) whiffed on a corner, which would have been embarrassing if there was an Interista on the far post, and then got into a very, very verbal argument with Thiago Motta. I've always though Thiago Motta was kind of a scuzzy player, all the way back at Genoa last season, so he musta done something that really pissed Buffon off, who is normally the calmest on our team. Great stop on Samuel, and was always attentive at the back, though he didn't get called into that many saves. 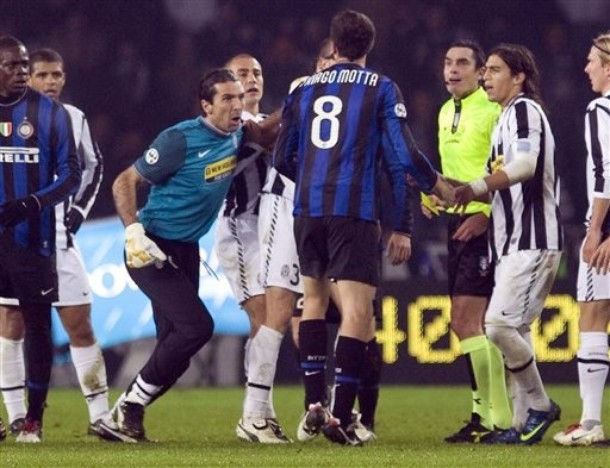 Caceres: 7- From last week's review: P.s.- We need to sign Caceres. I really like this kid. Maybe in exchange we can offer Amauri? My Facebook post from earlier this week- Aaron Giambattista wants Juve to sign Martin Caceres on full ownership. Need I say more? I love this kid. Right-back solved for the next decade. He gets the Alessio's MOTM award.
Cannavaro: 5.5- Didn't coordinate well with Chiellini for much of the first half, and they looked nervy. Grew into the game a bit, but had difficulty with Inter's forwards. Not a great game, but not necessarily a bad one.
Chiellini: 6.5- Like with Cannavaro, the CB partnership was iffy in the first half, but his header was crucial to opening the scoring, whoever ends up getting credited for it (I've seen Chiellini, Del Piero, and Melo credited with the goal) and he was an absolute beast as the game progressed.
Grosso: 5.5- Pushed up a few occasions, and generally didn't seem that busy, I guess Jose told Inter to focus on attacking Caceres' flank. Unlike the rest of the defenders, his second half seemed more nervy than his first. An adequate showing against his old side. 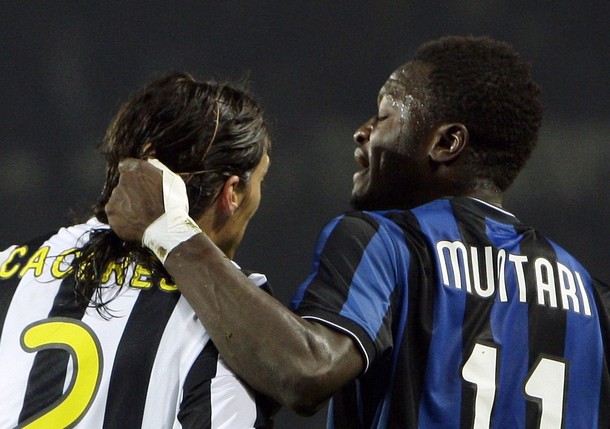 Sissoko: 6.5- Battled hard and well in midfield, when Felipe Melo was largely absent from the action. Recovered several balls, didn't try to pass that much, and his shot led to Marchisio's opening. Did he exaggerate Chivu's headbutt? Yes. All in all, good performance.
Felipe Melo: 5- For the 2nd time in 2 weeks, he gets Alessio's FOTM. He played a decent game, though not as good as Sissoko, but stupidly elbowed Balotelli to make the ending a nailbiter for all Juventini. That said, the contact from Melo was minimal and was aimed at Balotelli's chest, who promptly hit the deck holding his face. Balotelli's elbow on Melo looked morse than Melo's return. Anyways, Melo's ugly side has been coming out recently, and his performances have gone down as a result. Or maybe it's the other way around. Either way, the mandated-rest should do him good.
Marchisio: 7- He was pretty anonymous during the first half, but really got into it in the 2nd half. Brilliant goal...like against Livorno and Fiorentina, it's amazing how he has so much composure under pressure like that, to score a great goal like that against keepers of Frey and Julio Cesar's ability is not easy. As the game progressed, he got more ambitious and was taking Inter players on, over and over. What impresses me so much about him is he seems so experienced, it seems like he's done this all over and over. Tactically intelligent, composed under pressure, it is unbelievable how young he is. Hopefully, Lippi will show him the kind of faith in South Africa as he showed De Rossi in WC2006, though if he does, many will probably howl about his Juve bias. A splendid performance from the man in his 9th season or so with Juventus.

Diego: 6- Very good set piece deliveries, and did well to retain the ball when Inter was trying to outmuscle him. Not an electric game, but quite satisfying. 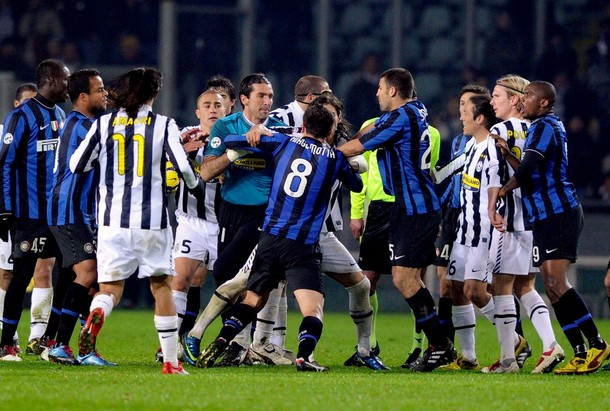 Del Piero: 5.5- Not at his greatest, though he did cause problems on occasion to the Inter defense. Given that it's his first Serie A start all season...we'll give the legend a pass on harsher judgement.
Amauri: 5.5- Maybe he's too slow? I saw him beaten by Inter's defenders for pace, time and time again and they are generally not a pacey group. Anonymous for most of the game as Samuel pretty much had him locked up. (Is Samuel one of the most underrated defenders in the world? I think so) 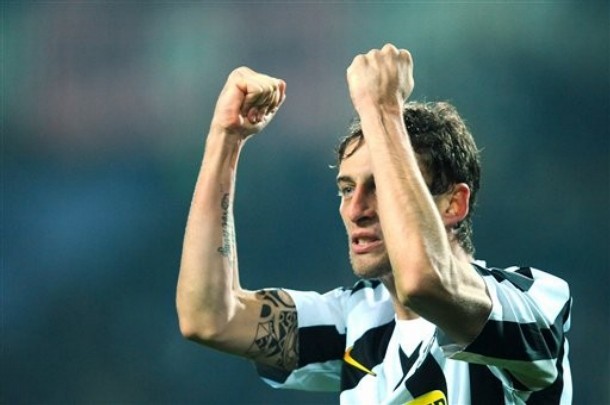 Camoranesi: 6- He offered an alternative to finishing the game Icing-style (hockey reference) and that was sitting on the ball a bit, and making Inter come after us. Job well done.
Poulsen: 6- Inter didn't score. That's good enough to me, he should get a good few games in with Felipe Melo likely getting a 2-3 match ban.
Grygera: s.v.- I hope you are comfortable sitting on the bench. 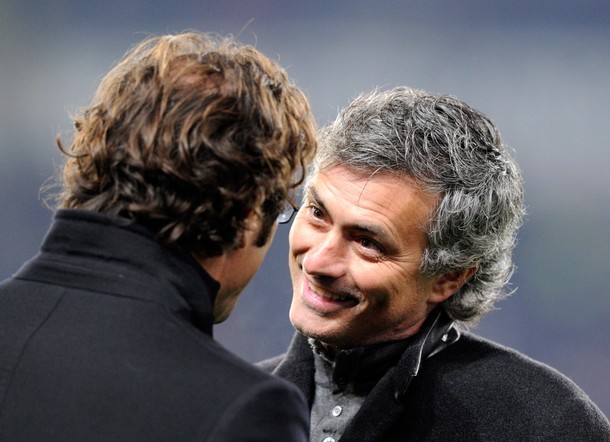 Ferrara: 6.5- We didn't play that terrific as a team, and individually, performances varied. But I think he got the team charged up for the game, whether we lost or won today, it's hard to deny we didn't look like the gritty Juventus of old. Switching from the 4-2-3-1 to the 4-3-1-2 (as I predicted) was a smart decision that shored up the midfield.

How much contact did Melo make with Balotelli? Look at 1:30 in this video.

Set Piece defending- Uhhh......what the hell was that? Did we learn nothing from Bordeaux?
Julio Cesar- Was it a case of nerves?
Balotelli- And people wonder why we hate him?? He came on, dove to the ground several times, and started shit with every player he could. Melo elbowed him (and was rightfully sent off) in the chest, Balotelli decided to pull a Rivaldo screaming "MY FACE!!" I laughed my ass off when he flopped on his ass delivering a set piece.
Overall Flop of the Match- Mancini. Wow. Honestly, when he got the ball before crossing it all the way to the other touchline, I thought "Holy shit, it's Mancini. I forgot he was playing." I did. Subbing Materazzi and Mancini on? Either Jose's cell phone wasn't working, or they had nothing on the bench.
Happy New Year?- We got Bayern, Bari, and Catania left. Let's finish strong. Forzaaa Juve!!! 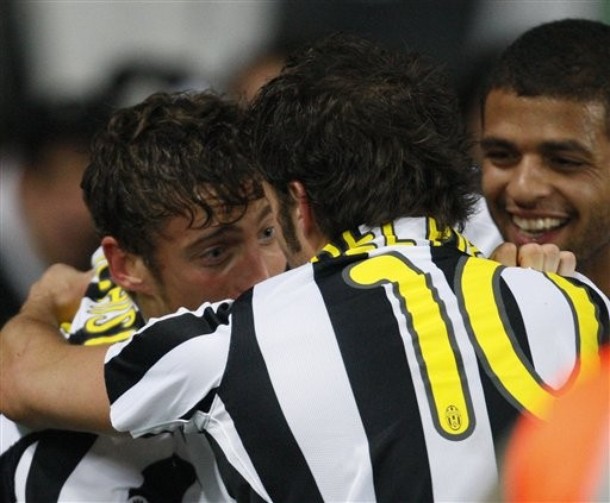 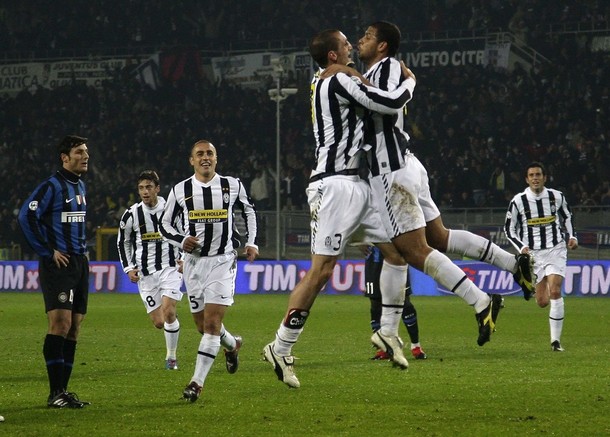 Do you think the photographer asked Zanetti to stay in the picture, looking forlorn? It completes it. 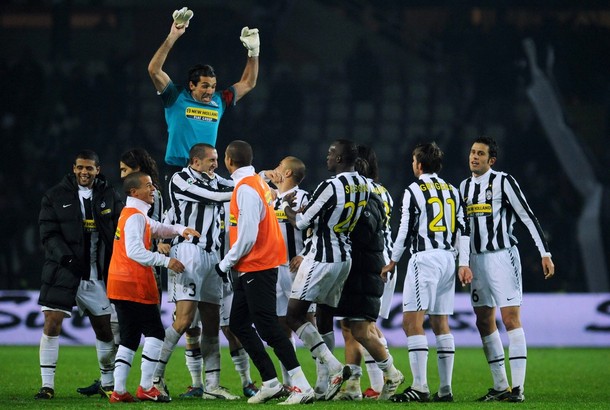 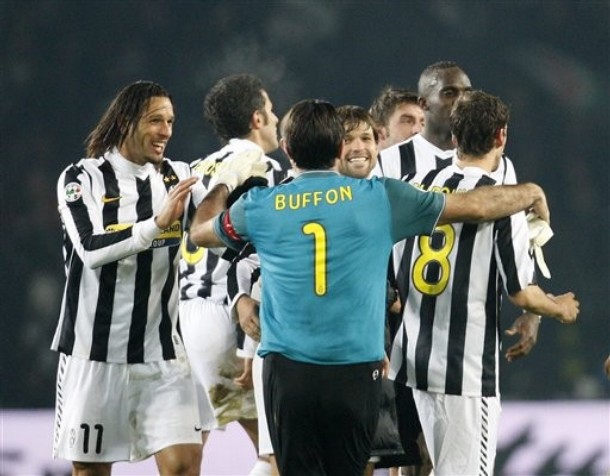 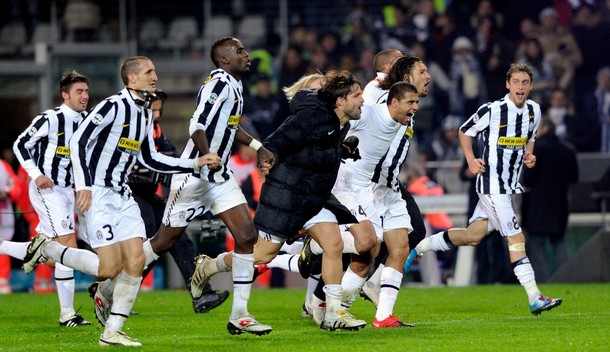 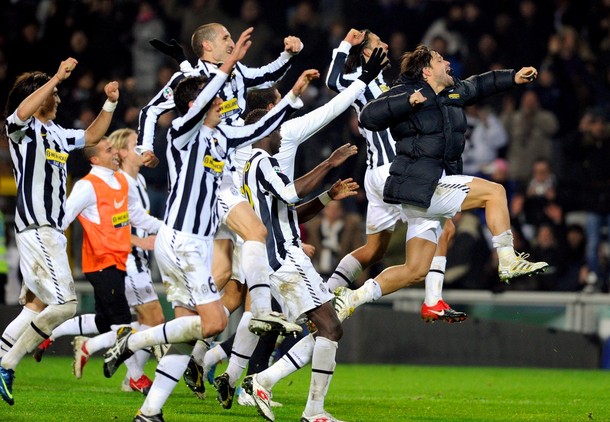 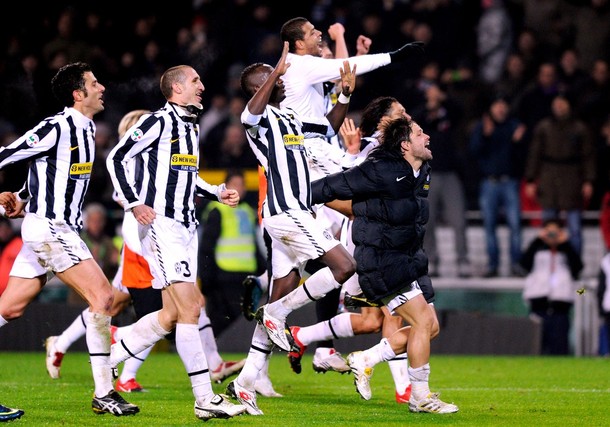 [EDIT] Our very own Ivo, regular commenter here at the Juve Offside, has recently put into place a sweet setup in which he'll be recording games (when not busy) in the future, and converting them into torrents. Anyone who's interested in a recording of the Derby d'Italia, post your email below in the comments section. I recommend using a basic hiding technique to stop automated spam collectors, like juventus [at] theoffside (dot) com. While you're at it...give Ivo some serious e-fistbumps for being awesome.