It's well known that Juventus is massively popular across il Mezzogiorno (southern Italy), and the second-favorite team would likely be Napoli. Being Barese, I was raised to dislike 4 things: Sicily, Lecce, the North, and above all, Napoli. Thus, this match is sort of a derby for southern Italians, some supporting the industrial powerhouse of Turin, and the others the corrupt trash-filled city of Naples. Full preview after the jump- 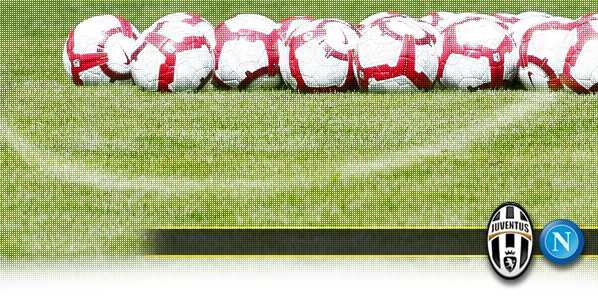 Truth be told, I actually like the city of Naples, even though mio nonno would smack me if he heard me say that. Is it gritty? Hell yes. Is there corruption and crime? Absolutely. Is it the real Italian experience? Probably, and it has the best damn pizza you'll ever find in the world and some pretty gorgeous beaches in the Amalfi region, to boot. If you're travelling to Italy, you definitely have to go to Napoli- after all, Pompeii and Capri are nearby!

One of the most ridiculous games I've ever seen...and not in a good way.

CONNECTIONS:
Juve Youth Pasts- Aronica and De Sanctis both played for Juve in their early youth, consistent with our policy to scout throughout Italy and sign the best youth we can. Sometimes it doesn't work out. De Sanctis is a pretty good keeper though, he's currently Italy's #3.
The Cannavaro brothers Paolo Cannavaro, is of course, the younger brother of Fabio Cannavaro. Napoli could definitely use Fabio right now. The Cannavaro brothers grew up at Napoli together, then moved to the mighty Parma, and then split ways. This will be their first game against each other in Serie A since Calciopoli, where they again chose divergent paths. Fabio fled the crumbling Bianconeri to Madrid, whereas Paolo decided to drop from Serie A to Serie B to fight for his beloved hometown team, Napoli, showing (cough cough) outstanding loyalty and spirit. (cough cough)
Neapolitan Juve- Cannavaro and Ferrara are both Napoli legends, though Ferrara won several Scudetti with Napoli during his 10-year period. Fabio spent 3 years at Napoli before moving to Parma. Back when Fabio was growing up, he was Napoli's ballboy and he has stated a number of times that Ciro Ferrara was his idol. Indeed, at a young age he was often referred to as "the new Ferrara." The two have a anti-cancer foundation that they run together, the Fondazione Cannavaro Ferrara. I jokingly think the Neapolitan bond is why Nicola Legrottaglie, who erm, stuck with Juve in Serie B is sitting on the bench, as there is a bit of Barese-Napolitano friction. If Conte had become the coach, then surely Legrottaglie would have become his preferred starter.

Ciro Ferrara's Farewell to Calcio- When Ferrara decided to retire, a honorary game was played in Napoli where Ferrara played one half for Juventus and one half for Napoli. Maradona had never been to Napoli since leaving the club, but promised to return for Ferrara's retirement party. You could look at this as a tribute to Ferrara, or crashing his party by overshadowing him, but the kind of person Ferrara is, I'm sure he didn't mind sharing the limelight.
Summer 2009 Mercato- Quagliarella and Cigarini ended up signing with Napoli, though Juve was briefly rumored to be interested in both, along with Lavezzi and Hamsik. I believe Quagliarella has stated he's a Juventus fan, and no, his love for Napoli and Juve are not mutually exclusive, like a lot of the South, we are their 2nd team. (if not first) Napoli, in their (unsuccessful) attempt to find a left-back wanted either Cristian Molinaro or Paolo De Ceglie. Cristian Molinaro is from the Napoli region, PDC is from (close to) Turin...easy solution.
Juve Primavera- We raid Campania a lot. Recent piccoli gobbi from the Napoli region include- Domenico Criscito, Antonio Nocerino, Cristian Molinaro, Raffaele Palladino, etc. Current or recent Primavera players from Napoli are Carlo Vecchione, Ciro Immobile, and Salvatore D'Elia who's Facebook info reads "tifoso del grande napoli!!" When checking where Vecchione and Immobile are from, I was surprised to see how many of our great young talents are from Turin- Rossi, Esposito, Marrone, Giovinco, Pinsoglio, and of course Marchisio and Giovinco Sr. We haven't really had that in the past.
Napoli's Jungle Fever- They love them some South Americans, in fact, they were the team that brought Amauri to Italy 9 years ago.

RECENT ENCOUNTERS: As schizophrenic as our record against Palermo. Knocked out of the Coppa in 2006, knocked them out in 2008. The last two seasons have been topsy-turvy. First, we lost thanks to two horrible refereeing calls from Lavezzi/Zalayeta dives in Napoli, 3-1. Then we won narrowly in Turin after a 80minute siege thanks to Iaquinta, 1-0. Then we lost in Napoli 2-1 thanks to He-Who-Shall-Not-Be-Named and co. at the bottom of our last Fall crisis, and then narrowly won in Turin thanks to a deflected Marchisio goal, 1-0. The moral of the story? This is a derby for a lot of people, in Turin, they come to play.

RECENT FORM:
Juventus- Improving: The 5-1 drubbing of Sampdoria helped pick us up a bit. (WWWDL)
Napoli- Steady: Mazzari has turned them around after an awful Donadoni start. Or is this still the post-coach changing bounce? (DWWLW) 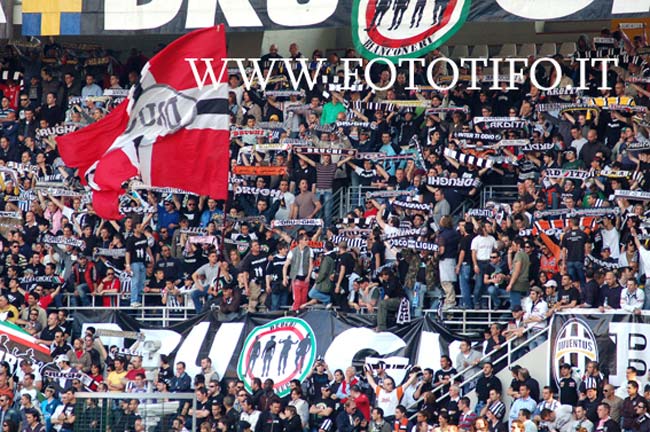 The Curva Sud ready for Napoli back in Serie B...

FORMATIONS AND LINEUPS:
Juventus- (4-2-3-1): It's worked, thus far. The deficiencies of the 4-3-1-2 are this: forwards in poor form, exhausted CMs, and playing two static forwards. With a healthy midfield, forwards who can actually score, and a second-striker up there, it will work. But for now, the 4-2-3-1 is unquestionably the formation, I mean hell, Gio is playing, Camo is uninjured, and Diego is sambaing. No complaints. When Del Piero and Marchisio come back, maybe we'll switch back, they don't fit into a 4-2-3-1 naturally. But there's nothing wrong with having multiple formations. Out of the game are Sissoko (20 days, muscle twinge), Caceres (broken nose, 3-4 days) Salihamidzic (who knows anymore), Marchisio/Iaquinta (meniscus, 10-15, 25-30 days respectively), Zebina (French, 1 month), Del Piero (muscle tear, 3-4 days)

In defense, one would assume ItalJuve to line-up, though Ferrara has (refreshingly) showed his willingness to rotate. It keeps them healthy, refreshed, and gives our squad players some playing time. With Maccabi on the horizon, Ferrara might rest Cannavaro and Grosso, as he has done in the past, which is a good idea. They are superb playing once a week, but if the two frequently play 180min, the fatigue will set in. They are not 27 anymore. Legrottaglie has largely held his own, while not playing as well as Cannavaro, though the same cannot really be said for Cristiano Molinaro. I wouldn't mind giving De Ceglie a chance at left-back and Legro a shot at the middle. Just no Molinaro, please.

In midfield, expect Gio-Diego-Camo to lineup again, with Poulsen-Melo supporting. Gio and Diego shouldn't be a big concern about overworking, they are young and should have the fitness levels to play 180minutes a week, if needed. Camoranesi is another case. Positioning him in a 4-2-3-1 is nice, because it doesn't require him to cover as much ground as in a 4-3-1-2 or 4-4-2, but I still worry about overworking him and causing an injury. We need him on the pitch. Tiago is back, but where does he fit in a 4-2-3-1? The way I see it, you have to have a lot of energy and pace to be able to make it in the 3 (he doesn't have it), and endurance and defensive capabilities to be in the 2. (Also missing) Marchisio could play conceivably in both, though not ideal, I'm not sure I could say the same for Tiago, to which Ferrara agrees.

In attack, it's a straight question of Amauri or Trez. Curiously, both arrived in Italy in 2000, though obviously took very different career paths. Amauri will get the nod, as he is in better form than Trez and provides more of a reference point for the 4-2-3-1. (That's what consecutive games can do for you..ahem) Though don't count out the T-Rez, who has just as many Serie A goals as Amauri this season, quietly getting back into form. (I cannot deny my love for Trezeguet. He may not do a lot of off-the-ball work, but his efficiency and place in this team are unquestionable) 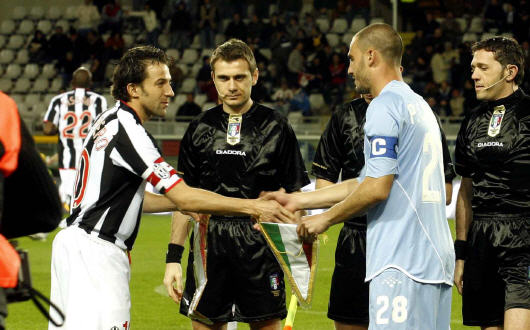 Napoli- Check out the Napoli blog for the best answers, Chris and Neil do good work over there even if they are blogging for Napoli.

Napoli has had a strange start to the season, a terrible one despite significant investments in Zuniga, Quags, De Sanctis, and Cigarini further confirming Roberto Donadoni's general uselessness, though the problems with the team go much further, as they looked the same as when it all came apart under Reja. Poor discipline, perhaps? Lack of motivation? No left-footed players? Whatever it was, Walter Mazzari came in and seems to have figured it out. They've held their own admirably, though they lost to Roma, they have beaten Siena, Fiorentina, and had a great comeback against Milan this weekend. The only injury concerns for them are Santacroce (fell off the face of the world a year ago, recovery time unknown) and perhaps Zuniga. One thing I think was cursing Napoli was their strict adherence both under Reja and Donadoni to the 3-5-2. It wasn't working, and it's finally been scrapped. 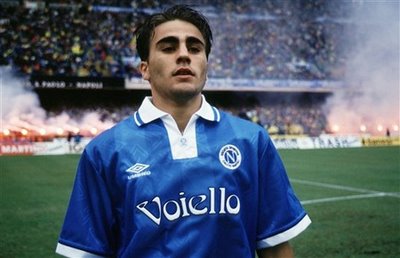 That color looks good on you Fabio...hint hint

KEY PLAYERS:
Quagliarella- He's had a very quiet start to his Napoli career. Let's hope it stays that way.
Giovinco- He played well as trequartista, and is thriving in the new formation. Napoli's defense is slow and not that good with tricky players, he could tear them apart.

FINAL WORD: As Christopher pointed out in his post, Napoli have an incredible propensity to concede in the first 15 minutes of play. Let's capitalize on it. A swift punch to the Donkey cojones would be a great way to hurt their confidence.