The Enemy Of My Enemy Is My Friend

Share All sharing options for: The Enemy Of My Enemy Is My Friend 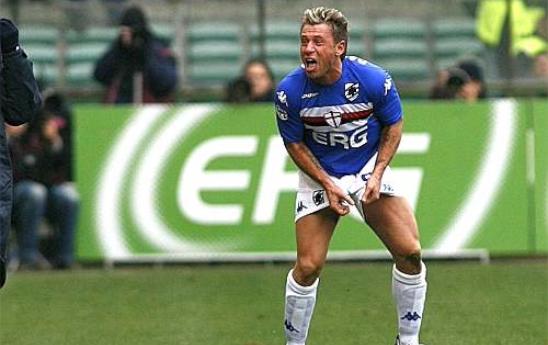 Tonight won't be the type of showcasing you hoped it would Cassano.  If I'm Ferrara I'm betting you have more trouble playing against yourself than my defenders.  So, my guys are gonna play you tight hoping you start feeling like the calls aren't going your way.  Once the fuse is lit, watch the implosion from a safe distance.  I'm sure you're a nice guy Antonio, but there's no fucking way your going to just walk into our house and continue to build a case for South Africa tonight.  Not now, not against my Juventus.

Mannini, incredible positioning.  Pazzini, much more dynamic then I had thought.  Castellazzi, great hands.  But in my opinion against the Bianconeri, the three of them can't do this thing by themselves.  Take Cassano out of the game and you take Sampdoria out of the running tonight.  That said, we need to play great at the same time.  Oh yea I forgot about that part. Ciro's take on the match:

"We need a top level Juve to beat the team which is in most in form at the moment. To win we must play a great match. Decisive match? Here they are always decisive and we must try to take advantage of the home stadium".

"Cassano? He is strong this year as he was in the last year or when I played against him as a player. He is decisive and fundamental but Sampdoria had an excellent game organization which allows even other players to do well".

To face a well launched Sampdoria, Ferrara would have liked to have a complete squad, however after Iaquinta he also lost Caceres (nose fracture) and Felipe Melo received a blow in the last training session. All this, however, does not frighten the coach:

"I am hopeful about Felipe. I think he can recover without any problems. Injuries and suspensions are part of the job. The important thing is knowing how to manage these situations. Nonetheless I have an excellent and numerous squad at my disposal. I have faith in those who will be playing and Samp at the moment is capable of motivating the team".

In other news, Caceres was operated on this morning and will be discharged from the hospital later tonight. Apparently he'll be able to resume training as early as Saturday. Anyways, the usual suspects are still out injured which means our lineup will probably look like (4-2-3-1) : Buffon - Grygera, Cannavaro, Chiellini, Grosso - Sissoko, Melo - Camoranesi, Diego, Giovinco - Amauri. Our youngster Immobile was called up but he probably won't see any PT. On their end, Semioli is out so expect a (4-4-2) consistinng of: Castellazzi - Stankevicius, Gastaldello, Lucchini, Zauri - Mannini, Palombo, Poli, Ziegler - Pazzini, Cassano.