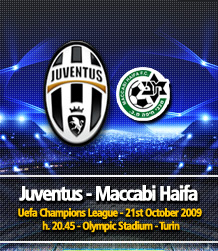 We're unbeaten at home in this competition since 2004, and they've never won in any of their previous four Champions League games away from home. If history can teach us anything, I would have stayed awake during it's class. I'm not taking anything for granted tonight.

"We worked on something different but I want to wait and see until tomorrow. Choices are made according to the particular moment of the team and something according to the opponent we will be playing against. I want to keep everyone in suspense, ready, careful, concentrated and mean".

"I saw them [Maccabi Haifa F.C.] play and I think they are a very organized team, very linear and well placed on the field. Certain elements are high in quality. They lost the first match at home but they played well in the first half. Against Bordeaux they lost in the dying minutes after having created a number of opportunities. It is a team that should be respected with very young fullbacks, some of which were born in 1991". Ciro Ferrara

The suspense is killing me Ciro. 4-3-1-2 or the 4-2-3-1? Just tell me you're employing strippers in our line up for their prepubescent fullbacks.  I knew having Legrottaglie on the team would come in handy.  But seriously, put Giovinco on the pitch you fucker. No Diego, No Giovinco, No party.

Eyal Meshumar and John Culma returned from injury at the weekend and are available for selection. Eyal Golasa is out with a hip complaint. Biram Kayal is suspended for two games. Captain Yaniv Katan is out of contention after having complained of a bout of flu against Hapoel Beer-Sheva. Amir Edri is still out, Tsepo Masilela and Shlomi Arbeitman are doubtful.

Vladimir Dvalishvili will be the dangerman. The highly-rated Georgian hitman scored twice on Saturday against Hapoel Beer-Sheva and he will be eager to do the damage against the Old Lady. Probable Starting XI: Davidovitch, Masilela, Keinan, Meshumar, Teixeira, Boccoli, Culma, Dutra, Arbeitman, Dvalishvili, Ghadir.

Bottom line, we need the three points here and I couldn't care less how we go about it. Tonight we dine on humus and lightly toasted pitas, mmmmmmm. For links, so far there's only this from myp2p.eu.