Share All sharing options for: PotD: The Goran Pandev Question

So this summer, Lazio striker Goran Pandev basically demanded an exit from club, expressing his desire to play for a big club and compete in the Champions League. Sensing some tremendous publicity from a falling-out, Lazio president Claudio Lotito said "Show me the money bitches" and slapped a 19million euro price-tag on his registration. Since then, he has been frozen out of Ballardini's squad, threatening lawsuits here and there, but mostly praying for the January mercato to open. 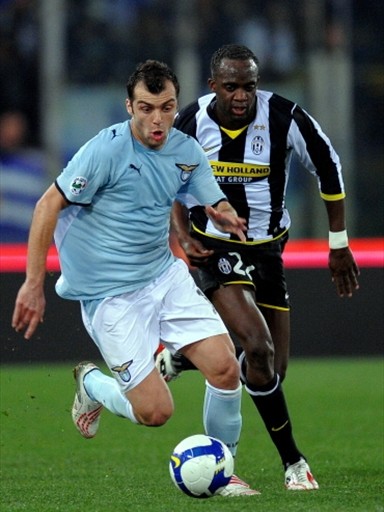 So the question, I pose to you, Juventus Offside readers, is should we move for him? We've been linked to him a lot in the last few months. Here's the breakdown of the pros and cons as I see it-

Pros:
-He's a pretty good striker, with about a 1:3 goal ratio for Lazio. He's got a pretty decent shot, and doesn't seem to mind running at players.
-It would be a pretty cheap signing- his contract expires next summer so Lazio will probably try and off him for whatever price
-Should we wait till next summer, he would be available on a free transfer
-He's a hard worker and fairly experienced at the club and international level

Cons:
-Is the dispute mostly his fault, Lazio's, or both? I wouldn't want to see that kind of situation at Juventus
-Is he a top-class striker or is he just a "good" one?
-Do we want an ex-Interista? Inter is also supposedly interested in him
-Do we need another striker? (Basing your vote on Trez's departure is fine, just state so)
-With Zebina still around, will rogaine relocate from the San Siro to a stand outside of Vinovo?

So I turn to you all, to vote on it. I'll express my choice in the comments section, as I hope you will explain your vote too!