Udinese v. Juventus: Iaquinta To Start... on the bench

Share All sharing options for: Udinese v. Juventus: Iaquinta To Start... on the bench 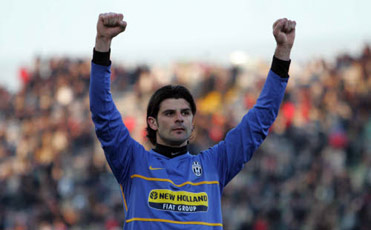 [Also] David Trezeguet is included in the list of players called-up for the away match against Udinese. This is very good and long-awaited news for Juventus supporters. Four months after the operation to both knees the Frenchman is once again available for Mr Ranieri. Together with that of the striker is the return of Giorgio Chiellini (his first call-up of 2009) who recovered from a muscular problem, along with Cristian Molinaro and Momo Sissoko who were suspended for the last match.

Alessandro Del Piero and Cristiano Zanetti will not be going to Udine. In both cases the reason for the missed call-up is a rest as a precaution following the blows received to the right knee of the captain and the right ankle of the midfielder. Manninger, Camoranesi and Tiago, as well as Salihamidzic, Zebina and Knezevic are still absent. Two Primavera players were called up: Ariaudo and goalkeeper Pinsoglio.