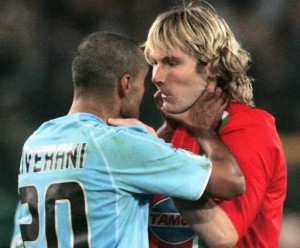 What a classic picture. It almost looks like this ex-biancocelesti is trying to open Pavel's mouth with his left hand to examine his gums. Silly Liverani, they're as immaculate as his hair you idiot. In any case, Liverani was shipped off to Palermo for putting his hands on an ex-Lazio man adored more than him. True I swear.

So Liverani-less, Lazio currently sit seventh in the standings three points ahead of their city rivals Roma. These next couple of games will most likely be decisive for their dreams of European glitz and glamour so definitely expect some action. Maybe not this type of eye gazing action again but what do you expect when Nedved has such dreamy baby blues. Thoughts on Ranieri's thoughts after the jump.

Big Claudio did his best to answer a few questions during a press conference on the eve of the match at the Stadio Olimpico. He's asked a whole ton of shit coaches of his calibre really never answer pre-game, but what the heck you can't hate on the reporters for trying.

Do you have a formation in mind already? What about Lazio?
"I will think of the formation tonight. You know which players are available and which are not. Lazio is in good form. They have a good team, Delio Rossi and Loitto put together a good squad. I had spoken of them as being amongst the top teams".

"They had problems last year because of injuries so they couldn't repeat the performance of the previous season. This year we will be playing a difficult match. They are fast and organized. We however are ready and will do our best".

What about Buffon and Chiellini?
"Buffon should be in the starting line-up. I will talk to him but things seem ok. He rested against Catania and is now ready. Chiellini has this muscular problem. It seemed like a little thing but it was more then we thought. He came back from the break and felt something. Certain small injuries take more time. There are some players who recover fast and others who need more time".

How do you fell about the problems in the defence?
"I feel as always. We had problems before in the midfield which I overcame by changing Nedved's position. This is the first time this season we have so many defenders missing but I have good players and we'll see what we can do".

What about Ariaudo? Will he be in the starting line-up?
"I have to think and consider everything because there are various aspects and so I must think well about it. Lazio have fast players so I have to think before making a decision".

Do you feel demoralized since you had hoped to find the full team available after returning from the Christmas break? Will Juventus buy any new players in January?
"I am not demoralized. Things aren't worse then they were before the break. We have to deal with Chiellini's injury and Grygera's suspension but these are not long term problems and we should have everybody back in two weeks time. No. I don't think we need new players. We cannot have a squad of 40 after all only 11 go on the field".

What do you think of this new trend of big investors trying to poach champions away from their teams? Do you fear losing Buffon? Will Milan be weaker without Kaka' and would you sell him?
"I think that until there are people ready to invest in football they are welcome as long as they don't open a vortex. As a sportsman I wouldn't like to see Kaka' leave because Italian football would be losing a champion but I can't interfere with Milan's plans".

"Buffon? They seem to be thinking of others so I don't think I have the worries Ancelotti has at the moment. Milan without Kaka is different but here we have a number of beautiful examples of players leaving but the squad still going strong: Vialli, Baggio, Zidane, Platini..."

What are the things to think about? Do you think Milan will be weakened if Kaka' leaves?
"The more good teams the better because the points are more open. I think of my team and at the moment of Lazio. I know what Lazio is capable of doing when in good form so I look at what I can do and not what can happen to others".

Do you think Juventus are capable of changing tactics since you seem to have a 4-4-2 formation as default?
"We did it when we needed to. We changed formation as was necessary. It depends on how you express yourself best. Up to now Juventus has always been clever enough not to allow the other team to impose the game but dictate theirs on others".

Couple things first. Since that press conference Buffon has gotten sick so he'll be missing this one (dammit). Instead, Manninger will be in the starting eleven line-up. Also both Chiellini and Camoranesi haven't sufficiently recovered from their respective injuries yet so we could very well see the afformentioned Ariaudo again starting at centre back alongside Legro. Does Ranieri really have any other choice in defence? Well if Mellberg is going to cover Grygera's void at right back, then realistically speaking the youngster is our only man fit for the job.

However, did you notice how concernded Ranieri was with Lazio's pace? Perhaps then he's thinking Mellberg's experience might serve us better in the middle. Thus, Ariaudo's out and maybe our utility man De Ceglie might be asked to play some right back with Molinaro expected to start on the left as Salihams is still useless. Speaking of useless, Iaquinta, Trezeguet, Knezevic, and Zebina round out the remaining names on that list.

Speaking of Lazio's pace, how about a Seba-Nedved swap in our midfield? Everyone knows speed kills, and with Super Seba's own we could do well matching pace with pace up front. Maybe he'll do it, but most likely he won't. What he will do is start Marchionni, Sissoko, and Marchisio in the remaining slots. It'll be interesting to see who from the Za-Pa-Ro (credit C4) trio will give Sissoko or Marchisio (or both) a run for their money. Zarate is talented but young and stupid... Wait what? Shit! So are Momo and Marchisio. What do we do? Maybe through in some Zanetti action then. Either way this midfield battle shouldn't be as important our defensive stand against the Za-Pa-Ro.

Finally, this whole Kaka to Manchester City for me is officially done. The way the Milan players hugged him after the game said it all. Kaka is now a Citizen. What does this mean to the fans? "There was tension during the half-time break, as furious supporters tried to get into the VIP area to insult general manager Adriano Galliani and were waving money to suggest this was all the club cared about" C4. But remember everyone like Ranieri said "we have a number of beautiful examples of players leaving but the squad still going strong: Vialli, Baggio, Zidane, Platini..."