While our reserves were able to go to Sardinia and battle out for 3 points, we failed today. Unluckily so, to say the least. I missed the game live, but watched it on replay. It was painful, since I already knew the result. I just knew we wouldn't come out ahead. 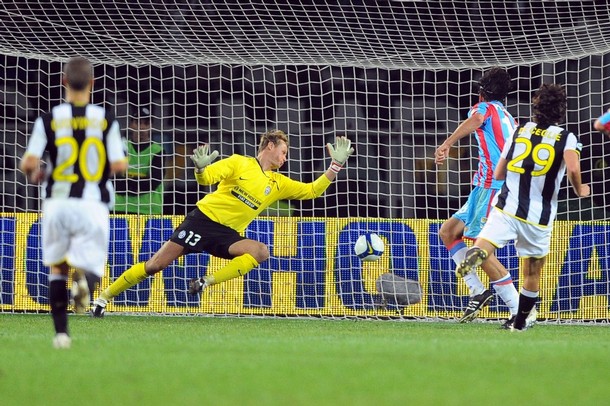 There's something about Catania, we can beat Inter or Roma, but apparently not gli Elefanti. A concise review of the game.

The Good:
Nicola Legrottaglie: He was one of better players today, holding the Catania strikers in check for most of the game. Some might say he should have gotten a header to Catania's cross, but it'd be hard to blame him for it.
The Young Guns: Juve has frequently bought our talent from across Italy, ie- Conte, Tacchinardi, Del Piero. But on show today were 3 Piedmontesi; Paolo De Ceglie, Claudio Marchisio, and of course, Sebastian Giovinco. All performed as well if not better than their counterparts. Marchisio retained possession amazingly and his passes were pretty good, Giovinco was sensational, and De Ceglie is still better than Molinaro.
Amauri: Last 3 games, he's scored 3 goals. Can't ask for too much more than that. But still, I felt if Trezeguet had been there, we would have won the game, nothing against Amauri who is much more talented technically, but when it's in the box, Trez would have pounded one in somehow. I've always been a huge Trez fan, we're gonna miss him. Had Amauri not arrived though, I think Trez's absence would have ruled out a Scudetto challenge. Anyone know the record for most goals in consecutive games?
Bizzarri: After playing incredible against Inter, Bizzarri really stonewalled us today with some truly world-class saves.

The Mediocre:
Zdenek Grygera: Perhaps he's saving his energy for this weekend's big game against Sampdoria, who luckily for us are struggling, but he wasn't quite the attacking force we're accustomed to. But still, he dealt with everything comfortably defensively, and to compare his performances now to a year ago...he's our right-back for the next few years.
Christian Poulsen: I thought he was a bit anonymous during spells of the game and didn't hold up the midfield as well as normal. He's been thrown into the fire due to Zanetti's injury, but he's done well for the most part.
Alessandro Del Piero: He was sensational in tearing Catania's defense apart with Giovinco, but his finishing and his free kicks were not very good. He'll probably be starting against Sampdoria, when we returned to Serie A do you think anyone expected him to be able to play 2 full games in a week? Certainly not.

The Bad:
The Crossbar/Posts: 'Nuff said. We need new goals at the Olimpico. I can count 2-3 games where we hit the crossbar 2-3+ times in the last year. At home v. Udinese, Sampdoria, and now Catania.
Giorgio Chiellini/The Pitch: Ranieri said it was something odd with the pitch, but a very rare error nonetheless from our super center-back. He had a relatively good game, but like Mellberg a few weeks ago a crucial mistake lost us 2 points.
Marco Marchionni: Marco had a solid game the other day, but was very poor today. He was constantly losing the ball and just seemed off. Considering he's played 5 games or so in the last year, I'll give him a pass on it though. He needs more time to get in form.
Claudio Ranieri: I defend Ranieri constantly and I still don't blame him for two dropped points today. But he does have a strange habit of making subs too late. Nedved+Tiago? Sure, great. But that late into the game, they never really had a time to make an impact.