So, I was going to be at the beach all day today, but a storm decided to roll in this morning. End result? I'm sitting inside the beachhouse watching the rain come down, pretty cool stuff. But the upside is I'll be watching this glorious friendly as well, and I figured, if I'm watching, why not liveblog it?

Pregame notes- Our 70-year old loser coach says he doesn't want to disrupt the rhythm of the game too much, so we probably won't see too many subs. My best friend (a ManUre fan) informs me that there's a fair amount of injuries in the United camp, so we probably won't be facing their best XI.

It's raining like shit in Manchester. God, it seems, is not without a sense of irony.

1'- We're off, and it looks like the rain has cooled a bit for the match. United has put out a competitive team. So has Juventus.

2'- United's just passing around to get a feel, moves forward and Tevez gets smothered. It appears this is our XI-

3'- United gets fouled in the box, Grygera lucky not to give away a penalty there. Mellberg blocks a shot and Old Trafford is booing Sissoko like crazy.

6'- Nice play between Del Piero and Camoranesi there, Mauro blasts one off of Vidic, corner.

7'- Fletcher makes a good run and is onsides.... and horribly taps it over Buffon.

9'- United passes around the 18' but nothing happens of it, some good defending by Juventus. Iaquinta is sent out but Vidic makes it first, Vincenzo has been putting on some serious speed in preseason thus far.

12'- Tevez and Giggs have been running the show up top for United, Evra has been pretty shitty offensively thus far.

15'- United has had the possession thus far, but has Juve ever had the majority in the first 15minutes or so? We're slow starters. 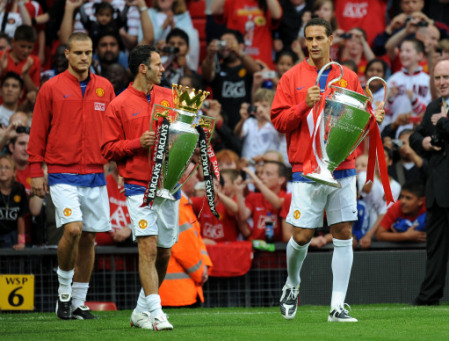 16'- Camoranesi runs through United, survives a few challenge before Ferdinand makes a good challenge. Tevez is fouled hard from behind by Legrottaglie but no card.

18'- Lordy. I am watching MUTV's feed of the game, and of course they are going to be biased but their ignorance is hilarious. "Camoranesi is Argentinan? Who knew?"

20'- Great chance for Juve, Camoranesi with a good incisive pass to Del Piero, who holds onto it too long and the shot is blocked.

23'- Giggs with a cross right to Buffon. Great pass by Del Piero to Iaquinta but nothing comes of it.

25'- And ADP dribbles past Vidic and Ferdinand, but the shots blocked. Did you see that, MUTV douchebag? And Juve plays in Turin, not Milan.

29'- "Juventus looks solid at the back, Poulsen shielding the back four, they get a lot of men back there." We've been beaten on the counters before so it's good to see people getting back.

31'- United is clearly in better form but their season starts earlier. Martins makes a run down the left but Grygera makes a good challenge and Juve attacks on the counter. Chiellini is making good runs up the left.

32'- I can't tell you how happy it makes me to see our players get back on the counters.

33'- Giggs and Salihamidzic (think '99 CL final) get into a bit of a tiff, and Chiellini breaks it up. 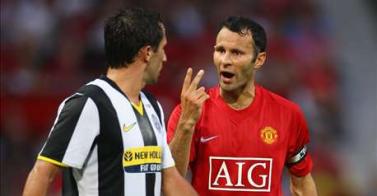 34'- Other than the Brazzo-Giggs argument, the game has been pretty friendly and pretty even-sided thus far. Looks good thus far.

38'- ADP and co. are advancing well, nothing concrete yet. Almost exactly like United's offense. Vincenzo is playing decently but he needs to trap the ball better.

41'- Corner goes into sidenetting. These commentators are killing me. Why does any English-speaker watch the EPL? They just reek of stupidity.

43'- Nice cross by Giggs but Buffon does well to come out and claim it. You can hear someone from the bench yelling in Italian. Chiellini places a nice long ball to Salihamidzic but he couldn't make it there and it's a goal kick.

44'- Good chance for Juve as Camoranesi is dribbling and several players make runs but he picks out no one. 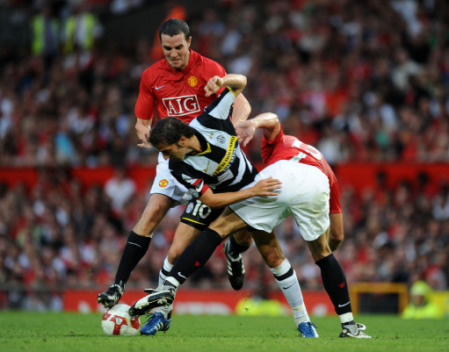 Juve looks in pretty good condition, our defense has been claiming well after a shaky first 10 minutes or so. Neither Buffon or Van der Sar have really been tested, even if all the forwards have been pretty busy no one has really gotten a shot off yet. If there's one thing that's lacking a bit for Juve thus far, it's a good first-touch. United is winning a lot of challenges as we're taking too much time to settle the ball.

I thought my feed was going down for halftime, but it looks like it may be down completely, damnit.

50'- I found a feed, weird all of those went down at the same time, just in time for a heart attack. Tevez crosses over the face of the goal, Da Silva recovers, and crosses where Scholes comes barging in but misses. Looks like some substitutions, Da Silva in for United and Amauri in for Iaquinta I believe.

52'- It's raining again and off a nice corner from ADP, VDS collects, only to faceplant into the grass. Chant with me all, JUVE REJECT!

53'- Since when did United start buying Brazilian? Probably around the time they stopped using their academy.

55'- I swear to god, English is my first language and I cannot understand what the hell this 2nd announcer is saying. Do you speak English or retarded?

56'- We're a bit on the backfoot right now, Mellberg and Legrottaglie are defending well. John O'Shea clatters into Mellberg and gives the ball to Juve, free kick. Evra dives right over Camoranesi's back for a header...how was that not illegal?

59'- Damn it is really raining at Old Trafford. Amauri looks majestic. Thanks to the cameraman for the 10second long zoom-in of him.

63'- Silvestre comes on so Evra is now a left-winger apparently.

65'- Legrottaglie and Grygera are doing well. Our defense is surprising me a bit. Giggs' corner goes untouched, on the counter Sissoko (wtf?) fires a shot in but never troubled Van der Sar. As my ManUre friend says, here comes Scholes with a "classic bomb" but horribly scuffs it.

67'- Marchionni has a shot (musta come on for Camoranesi at the half, haven't heard either name until now!) but is easily caught by VDS. 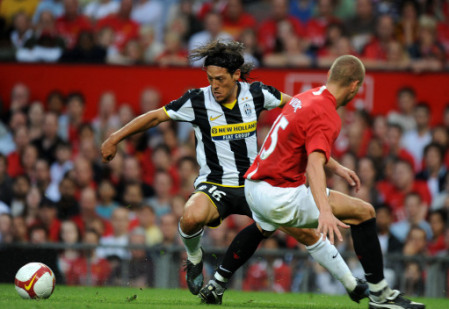 70'- ADP comes off for Trez, ovation from Old Trafford for Il Capitano. United bench is apparently trying to get pictures with him.

72'- United commentators are talking about how much of a freaking goal-machine Trezegol is. And how impressive that is in Serie A. No shit. It's not like scoring in, I dunno, the EPL.

73'- 17-year old Fausto Rossi coming in for Salihamidzic. Rossi has been lighting it up in pre-season, let's see if he can do it some more. The wave is going on in Old Trafford....I think I'm gonna puke.

75'- United's young brazilian Da Silva goes on a bit of a run, collects after a good challenge from Mellberg, then gets kicked in the face by Chiellini. Giorgio doesn't mess around.

76'- Remember how Ranieri said he wouldn't make too many subs because he didn't want to disrupt the game. Fergie didn't get the message, yet another sub for United.

78'- This game has been a good test for Juve and good test of our form, but it's been pretty dreadful otherwise. No real chances, not too much going on.

81'- Some decent work by United results in a corner, but is immediately headed out. Sissoko coming out for Albin Ekdal, the Swedish wunderkid. I'd like to see these announcers say the club Ekdal came from.

83'- Ferdinand doesn't look the same without the dreads. That is all.

84'- Gibson of United tries a shot from long-distance but doesn't bother Buffon at all. Decent cross from Marchionni aimed well but Amauri heads off-target. Good pass from Ekdal to Marco on that one, and Amauri shoulda buried that one.

87'- Great defending by Juve, anytime a United player gets a ball he is immediately swarmed on by two-three Juventini. Corner to United, cleared, and goes to a throw-in. Tiago coming on for Poulsen. Tiago scored a brilliant goal for Chelsea at Old Trafford? What the hell happened to him?

90'- Scholes has been passing very poorly today. Of course, he's a ginger.

90+1'- Giorgio tries a long-range screamer....but it's offtarget, a bit weak, and never troubled the keeper. Kind of the story for both sides today.

90+3'- Game over at Old Trafford. 0-0. Da Silva played great at right-back for United, and that's pretty much the only notable performance by anyone on the field today. 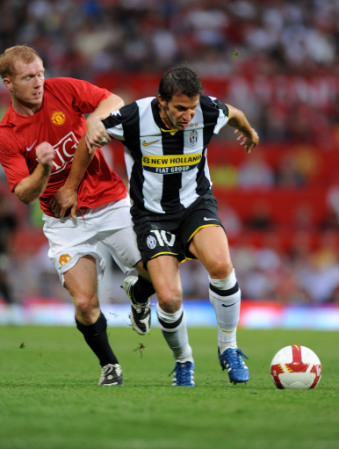 Match summary- United had more possession than Juve (shocker, they were at home) and neither team had any real clear-cut chances, both reduced to long-range crappy shots. Good fitness test for Juve against a strong opponent much farther in their training (Premiership starts this weekend) and no injuries, which is always a good thing. Ekdal, Marchionni, Rossi all got some good time in today, pretty obvious Tiago is on the outs when a 17-year old gets more playing time pre-season then he does. Our defense played well today, obviously, clean sheet away at United is never a bad thing, but Vidic and Ferdinand were on their game today as well. Maybe we'll meet up again later this season, but for now, that concludes my interest in Manchester United.