Previews: Juventus-Fiorentina, CALCIO IS BACK!

Share All sharing options for: Previews: Juventus-Fiorentina, CALCIO IS BACK!

Ladies and gentlemen, purgatory is over. The long summer months of "Will he, won't he" and the sheer boredom created from meaningless friendlies is over! Calcio is back, and I'm sure I speak for every Interista, Romanista, or whatever-ista when I say, thank god. Life is rough without it. The Lega's draw pitted us with a pretty difficult game to open up with. Since they eliminated restrictions on derbies, it is now possible to have the Juventus-Fiorentina derby (It's a derby? I know, but apparently its like the 12th biggest derby in the world. I call horseshit) on the first matchday, and that's what happened. Kinda crappy, right? Right. 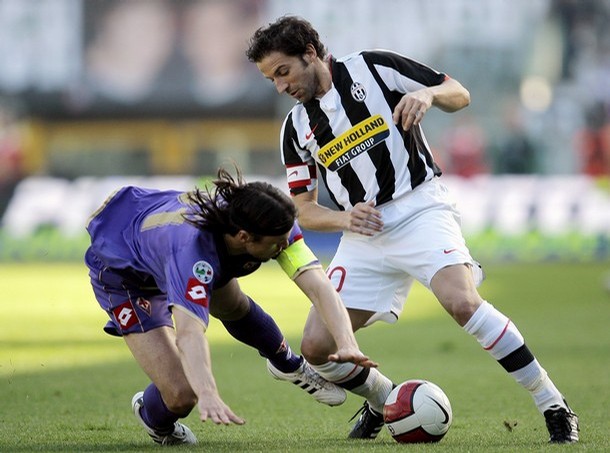 #1: Equal Footing- The game actually looks very even on paper. Both teams have been training for the Champion's League qualifiers, so fitness levels are about even. Juve and the Viola both had a fairly successful mercato, and both are currently battling injuries to key players, the Bianconeri a bit moreso than the Viola. Should be a terrific game, to say the least.

#2: The Reencounters- Fiorentina-Juve has always been a great game, and now is no different. There's an enormous amount of connections between the two squads, probably more than any other squad for Juve.
-Prandelli is a former Juventino, having spent 6 years in Turin, mostly as a reserve midfielder. (Or so I gather from 90 appearances in 6 seasons)
-Our mister, Claudio Ranieri, had a successful four year tenure at Fiorentina from 1993-1997, winning promotion to Serie A and the Coppa Italia. (And the SuperCoppa)
-Adrian Mutu was of course signed by Juve after getting busted for snorting coke at Chelski, before moving on to Florence.
-Giorgio Chiellini was co-owned briefly by Fiorentina and spent a year playing there before joining the good guys.
-Uberflop Sergio Almiron is currently on loan at Fiorentina.
-C. Zanetti grew up in the Fiorentina youth system and briefly played there.
-Reborn Viola striker Alberto Gilardino is a huge Juventus fan.
-Oh yeah, we bought Baggio from them. 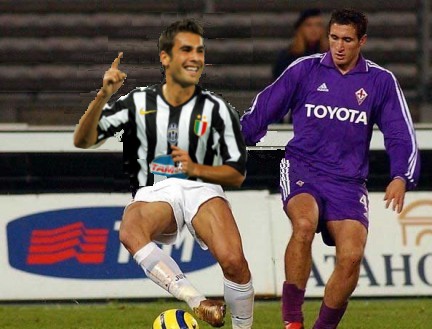 #3- A Good Start: Both teams have come off very successful seasons, both qualifying for the Champion's League when most observers thought it would be a reach. Both squads will thus look to this as an important morale booster, to get the season running in a positive fashion. 3 points for Fiorentina would be very welcome, and 3 points for Juve would be a terrific away victory.

#4- Injuries+Suspensions: As it has recently been the case, Juve has a whole host of injuries going into the game. Marchionni and Zanetti are still out for another few weeks from their thigh strains, Chiellini has started running but is still well far from recovery, Andrade is of course out till March, Trezeguet has a knee problem, and Nedved, Camoranesi, and Molinaro are struggling to be match-fit after minor training injuries. Sissoko is suspended due to his red-card against Sampdoria on the last matchday of last season. The only real injury of note for Fiorentina is, of course, the absence of Adrian Mutu.

#5- Run of Play: The Viola like to play an attacking-minded fairly open game, whereas on the road Juve like to play compact and organized. With injuries blighting our midfield and defense, our attack is going to have to get the job done. We need to defend well and attack on the counter, and that's what I expect Ranieri to do. We also need to close down players options in the middle, forcing them to the wing is much better than giving them space to roam in the center.

Starting XI's-
Juve: The big question is, with Trezegol out, who is going to be our striking duo? We're almost certain to play a 4-4-2. ADP-Iaquinta has worked well, but Amauri has also been in great form recently so it might be hard to force him to the bench. You'd think ADP-Amauri would be the logical choice but the two haven't had very good chemistry in pre-season, they did not sync well thus far. On the contrary, Iaquinta-Amauri seemed to work very well and many predict that is what we'll go with. Here's my guess:
Juventus (4-4-2)
Buffon; Molinaro, Legrottaglie, Mellberg, Grygera; Nedved/Giovinco, Poulsen, Marchisio, Camoranesi; Amauri-ADP
Subs: Manninger, Knezevic, De Ceglie, Salihamidzic, Ekdal, Tiago, Iaquinta

Fiorentina: I don't know what Prandelli's planning on going with, so I'm copying from Ted's preview of the game over at the Fiorentina Offside.
Fiorentina (4-3-3)
Frey; Zauri, Gamberini, Kroldrup, Vargas; Kuzmanovic, Melo, Montolivo; Jovetic, Osvaldo, Gilardino

Players to watch:
Juve: Claudio Marchisio- With the absence of Zanetti and Sissoko, Marchisio will likely be playing in the center of the park with Poulsen. He played well against Artmedia, showing vision, strength, and grit. This is a bigger test. The fact that he's almost certain to start ahead of Tiago (although Tiago isn't quite match-fit) shows Ranieri either has no faith in Tiago or enormous faith in Marchisio. I think a mixture of the two.

Fiorentina: Alberto Gilardino- Felipe Melo is close, because he will really hold up the Viola's midfield, but it's all Gila. A Juve fan since birth, Gilardino left Milan after a disastrous season and will be hoping reuniting with his mentor can jumpstart his career. The media has been praising his revival with goals against Austria and Slavia Prague, but neither of them convince me. One was an own goal more than his strike, and the other was a simple header from an offside position. I think we can mark him easily out of the game, he doesn't have pace or technical skill.

Prediction: I'd love to call a Juve victory on this one, but I don't think it's likely. Possible, certainly, but I'm not putting money on it. We haven't lost in Florence in 10 years. I'm calling a 1-1 draw with the two pseudo-Oriundi Amauri and Osvaldo getting on the scoresheets.

On a last note, player bios on Juventus.com have been updated. There's some interesting stuff on there, what Chiellini likes to eat, to what Grygera does in his spare time, etc. Worth a read. I may do a Liveblog tomorrow depending on what the hell is going on.