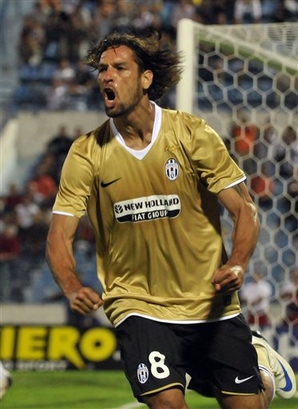 Today was fantastic, we got to play some of our 2nd-string players and they all did well. Giovinco, Marchisio, Mellberg, Amauri, Iaquinta, and Poulsen all were terrific, there will be some intense competition for spots this year. Two years later, we're finally back in the group stages. That's 8-10million euros cash for TV. Since we're unseeded, we may draw some tough teams. Bring 'em on.

Thoughts on the game:

#1- Amauri is a freaking beast: As our friends over at the Palermo Offside loved to tell us, Amauri is a tank. Not only is he a strong prima punta that has terrific aerial technique, Amauri showed off some fantastic dribbling. He also was constantly tracking back to help out in defense. While he's not quite clicking with all of the team yet (couple runs he missed) he certainly demonstrated his fantastic ability. We'll be seeing plenty of him in the future.

#2- Our midfield wingers are amazing: When on-form, there's no doubt that Camoranesi is one of the best midfielders in the world, yet he never gets the credit. Fantastic dribbling ability, great passing, and certainly the best crosser on our team. The crosses he whips into the center....magical. Speaking of magical crosses, the evergreen Pavel Nedved stuck a beautiful one in today, he was constantly moving up and down the left-flank. The Czech Fury's passion for Juve is unbelievable, as evidenced by his anger when substituted. (No one knows if it was because he was subbed out or didn't score) He's turning 36 this week, and Pavel shows no sign of slowing down.

#3- We've got plenty of depth: We rested several of our starters, and when you consider C. Zanetti, Marchionni, and Chiellini will be back in a month or so, we are set. Our attacking and center-midfield partnerships were our 2nd string, yet they played great today despite the 1-1 scoreline.

#4- Juventus is in good hands for the future: I am incredibly pleased at how our young players are stepping up to the challenge. They are not holding anything back and each is excelling in their own way. Another Juventino I know defended Secco's mercato in this way: We only reinforced positions we don't have young talent coming in. Ie- Instead of a fantasista like VdV/Diego, we have Giovinco. Instead of a master passer/CM like Xabi Alonso, we have Marchisio. Instead of a left-back like Grosso, we have De Ceglie. We don't have a prima punta or a defensive midfielder coming through so that's why we bought Amauri/Poulsen. Marchisio was MOTM for me today, he was tackling hard, distributing the ball very well, and generally strongly involved in play, I can't wait to see him play more. As RAI said after he slid into a tackle, he showed a lot of "personality," in direct contrast to...

#5- Tiago, what are you doing? So we've set him up with Everton, Tottenham, supposedly Newcastle, Atletico, and now Porto. And he's rejected them all? What the hell is going on? I'd really like to ask him. Is it none of these places appeal to him for some reason? Does he want to continue on his moderately-high salary? Does he think he can cut it at Juventus? Have I used too many questions in a row? I can answer that one, no. But all the others are up in the air. With Marchisio having a great game today, and C. Zanetti returning in a month, Tiago's space is getting more and more constricted. I don't understand why he's not even willing to do a loan move right now.

I'd really like to not talk about Tiago anymore.

Purgatory is over. It's good to be back.