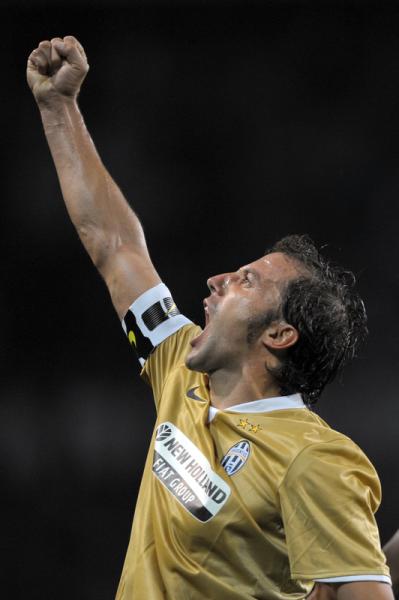 I watched most of the Viola's Champion's League tie yesterday, and I was impressed. They are a team seriously on the rise and they dominated Slavia Prague. I would have been satisfied with a 2-0 win. Yes, Artmedia is no Slavia but watching our boys win 4-0 (on delay, thanks to my boss not being out golfing today) was just tremendous. This posting is mostly impressions I got from the game, not as much a match analysis which Marco wrote up here. Chiellini cut the bullshit and told RAI we're in already. Ranieri was very satisfied with the team's play, considering we're not yet in 100% fitness or form but still wants composure for the 2nd leg. But god, it's good to be back.

Random notes about the game:

Summer, the biggest necessarily evil in the world: Obviously the players need a break, but I'm so glad we're back to the season again. Preseason friendlies are interesting to watch but they just don't mean the same thing. I felt more emotion today watching Juve beat some bush league Slovakian team than drawing the European champions. Two weeks until everything really kicks into gear, I cannot wait.

Shirts- Those gold jerseys look sick. My annual purchase will definitely be our away jersey. The summer of Calciopoli/WC I bought a Buffon kit. Last August I bought a Trezegol home kit, seems to have brought good luck thus far. This year? I haven't decided quite yet. I'm leaning towards Legro right now.

Goal celebrations in Turin: Have I ever mentioned how much I love how the Olimpico celebrates goals? That song, whatever it is, which everyone chants together, followed by the goalscorers number and first name, as the entire crowd shouts out the last. In the case of Legrottaglie, it's pretty funny because you just hear shouts. No discernible name whatsoever. One of the greatest feelings ever, standing and singing the song surrounded by Juventini. A reason to visit Turin in itself!

A night to remember: This night was not only history, of our return to the Champion's League, but it was Gigi's 500th official match for the Bianconeri, with a clean sheet to make it better. Grazie, Gigi, per essere ancora e sempre il nostro numero uno. Second of all, today, the 14th is Chiellini's 24th birthday. Auguri, Giorgio. One of the best defenders in the world right now and I'm hoping he stays alla Ferrara or Montero, with us for a long time. Captain of Juve (and eventually Italy_ after Buffon? 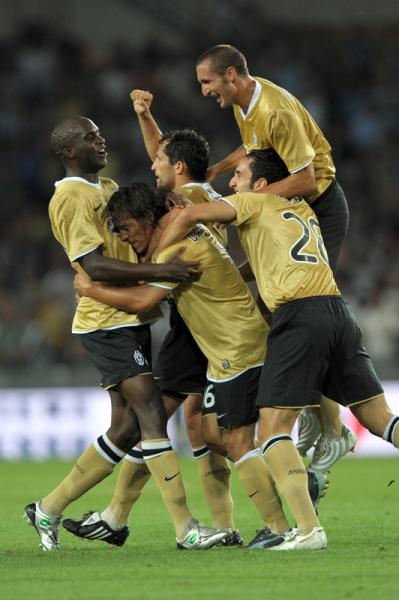 Juve's Team Spirit: This is what I was thinking about the bulk of today. Some clubs like Inter have some serious personality problems in the locker room, last year was pathetic with the fights between Figo, Ibra, Mancini, Adriano, etc. etc. Others just play their hearts out without any definite love for the club. Our players may come from Bari, Napoli, Torino, or Argentina, but they are united on the pitch. It's not just a team goal celebration, you can tell from everyone's grins that they are genuinely glad to be with the club and their fellow players.

Mauro Camoranesi: This guy is insane. Last year we had a slow start with our legends after Serie B with Camoranesi and Del Piero both out of form and fitness, from being injured for preseason. This year, neither were and it shows. Both are on fire and Camoranesi today demonstrated how absolutely essential he is to Juventus. His ability to remain healthy could prove crucial in deciding how we finish this year. Most underrated midfielder in the world? I've said it before.

Legrottaglie+Chiellini: Some have called for a Mellberg-Chiellini center-back partnership, and I'd say Olof may be technically better than Nicola right now. I've always been a big fan of Legrottaglie, even back when was a bust. He's Pugliese (like me), a good center-back, he shows passion, and his revival this season was an absolute joy to watch. Considering how little he played over the last 3-4 years, he can only go up from here despite his age.

You can tell there is a strong bond between Chiellini and Legrottaglie from watching them play together. These guys have a chemistry together, and I think both play better for it. Last season they often celebrated goals together (both scored more individually than Nedved and our fullbacks) and they've continued to do so this season. In Chiellini's goal, after celebrating with the team, Giorgio turns around and one-on-one celebrates with Legro. (:27 of Giorgio's goal) An hour later as Nicola scored in the 89th minute, the duo rock out together alone rather than a mass group hug. I hope they stay our #1 CB partnership for the next year, maybe two.

Resting our starters: I don't care if you're Liverpool or who you're playing, a 4-0 win at home pretty much guarantees progression to the next round. A win of this magnitude gives Ranieri some freedom to rest some of our starters in the 2nd leg, a double edged gift. It gives us fresher legs for the opening game in Firenze as well as a chance for the reserves to get some game in. Given the state of team availability, this is very, very helpful.