Share All sharing options for: Previews: Half-assed Preview of Juventus-Artmedia and Squad Updates

We're back, ladies and gentlemen. After two years of exile, Juventus FC officially re-enters the Champion's League in the 3rd-round qualifiers. Win this two-legged tie and we're into the lucrative group stages. Our opponent this year is FC Artmedia Petržalka, who won the Slovak league last year. In terms of Uefa co-efficients, they are below a Russian 2nd-division team, Dutch runners-up FC Twente, and barely ahead of shoulda-been-relegated FC Pacos de Ferreira, of Portugal. Hardly an endorsement of the team, but they are capable of giant-killing, having defeated Celtic in the 2nd round (5-0 first leg) in the 2005-2006 Champion's League, eventually reaching the group stages. They are one of the first teams (if not THE first) to make it from the 1st qualifying round to the group stages. When you consider we could have been paired with Atletico Madrid or Fenerbahce, it's a bit of a break.

Let's avoid this kind of thing.

There are two crucial elements of this tie:

#1: Injuries, Olympics, and Suspensions- Thanks to the aforementioned issues, we've got a bit of a selection headache ahead of the game. Giovinco, De Ceglie, and Marchisio are in Beijing tearing it up. C. Zanetti and the medical staff's 2nd favorite player, Marchionni, have both been diagnosed with minor muscle tears in their thighs. How they both managed to pull the same muscle on the same day I don't know. Maybe they really wanted to take a break. The duo will be out for 3-4 weeks. Knezevic and Molinaro are mostly healed from their pre-season injuries, although it remains to be seen if Ranieri will risk them. Lastly, La Furia Ceca will take no part as he's still suspended from receiving two yellow cards against Arsenal in 2006. I'm convinced no one would remember that long at Uefa if the Gazzetta hadn't dug it up. Who keeps track of that shit?

#2: Fitness- We looked good against Manchester United, and for the most part it looks like we're in good conditioning, thanks to Ranieri and co. Poulsen is still a bit behind schedule owing to his late arrival, but thanks to above problems will probably be played anyways. More importantly though is Artmedia's conditioning. Their league started almost a month ago, and Artmedia have 3 full games under their belt. I don't know much about Artmedia's style of play (does anyone?) but they will probably be able a bit fitter than us, depending on how much they get paid and how prestigious their league is. That's why Sissoko and Poulsen will have to jam up the midfield a bit. 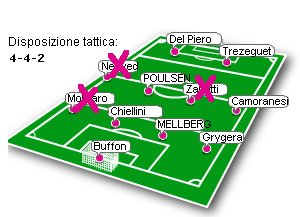 Predicted lineup: Who the hell knows? With so many minor problems Ranieri could throw us different ways. Some have called for a 4-3-1-2/4-3-3 with 3 CM's and given our formidable attack, 3 strikers. And the defense hasn't been totally sorted out. Here's my guess, a 4-3-3.

The Mister might throw in Giorgio back at CB and our favorite chameleon, Salihamidzic at fullback. Or maybe use him in midfield with Camoranesi slotting into a more central position. (Like against Inter) This should be a fairly easy game, considering the gap in quality. The first game is at home, and a solid result will put us back on the way to qualifying. We've looked pretty good in pre-season thus far, the key is avoiding complacency and maintaining good fitness. At home, we should dominate possession. Look for a 65% possession and a 3-0 scoreline to set us on our way. 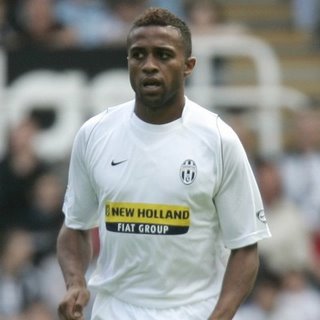 Andrade- The recent news about Freddie has got me thinking. Can we convince Andrade to tear up our contract? The picture of Andrade above is chosen because we've seen him more in that jersey than this one. For all our bitching about Tiago and Molinaro, at least these guys play. We spent 11 million euros on his transfer, what we thought was a bargain at the time. 2 million euros a year salary, so currently we have paid a total of 3.25million euros per game for him. That kind of statistic makes Sheva look good. Out all last season, out until March at least, injuries probably won't stop then, let's cut our losses, clear him out from our payroll, and move on. At age 30 he's not getting any younger, or sharper.

Tiago- How is there not more transfer speculation? Atletico seems interested but may be opting for fellow Portuguese Serie A flop Maniche to stay, and they've made no concrete offer. We almost unloaded him to Tottenham this January, but Ramos seems uninterested. Tiago rejected a move to Turkey, showing he might value playing time in a real league over lots of money, a refreshing thought given Kewell and others recent transfers. The management seems interested in keeping him, and at this point it looks like he's going to stay. All the media has said he's "desperate to leave" yet he has made no noise, nor has his agent. 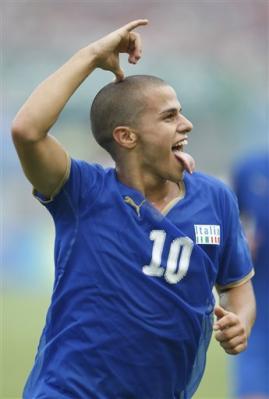 Giovinco- Are the olympics over yet?

Trezeguet- The annual-summer-rumors-linking-Trez-to-random-prestigious-team-despite-Trezeguet's-denial seem to have finally died off again. Looking forward to them next year, Goal.com and Tuttosport. How old does he have to be before they stop?

Mercato- Despite Gigli, Secco, Ranieri, and Blanc saying our market is closed, most news sources think we're prepared to swoop for another player. I wouldn't mind it, it'd be a nice little surprise. Rumors vary from Ivanovic (who they are now linking with Milan) to Aquilani to Lucho Gonzalez, etc. etc. I don't think it'll be a big name but I do think they will go for another player. We did pick up Manninger on a 4-year contract for 1million euros however. A very good signing.

I'll try and put up links for the Artmedia game when I find them, the game is Wednesday afternoon (for EDT), www.myp2p.eu will probably have it in addition to some of the betting sites. In the meantime, Forza Azzurrini and as always Forza Juve!